DURHAM, NC / ACCESSWIRE / April 3, 2018 / Recent scandals involving social media "influencers" have many describing these personalities as entitled brats looking to get things free, and for little work. For example, a recent case in the UK pitted a YouTuber looking for free hotel accommodations against a Dublin luxury hotel in an outright PR war. While those headlines make for good clickbait, the situation is more complicated, and more interesting, according to NG Gordon, a social media influencer veteran.

"The UK scandal points to a fundamental misunderstanding of professional social media influencing, perhaps on both sides," explains Gordon. According to Gordon, a brand looking to work with influencers, especially micro-influencers, should treat the interaction as a business arrangement, much as they would working with an advertiser or a graphic designer or a wedding singer.

Gordon, who writes and blogs as @DearMishuDad, is the person behind @DearMishu, a social media pet influencer. Launched in October 2016, @DearMishu has over 90,000 followers on Twitter, Instagram, and Facebook for an account the conceit of which is a dog who gives advice to humans. If you've ever read an advice column, the concept is similar - but in this case, the advice comes from Mishu the dog, whose simple approach to life translates into wisdom when applied to human dilemmas.

"Dear Mishu is a perfect example. As a micro-influencer, Mishu doesn't have a million followers, but those she has are extremely loyal, constitute a community, and value her authentic voice and look forward to reading her advice. It takes work to build that kind of community - time, creativity, and attention," explains Gordon.

Brands often talk about doing "outreach" to social media influencers - as if they are trying to get the cool kids to pay attention to them. "That's a mistake," says Gordon. "Brands should treat the influencer relationship like any other business development relationship -- lay out clear terms, sign a contract defining the scope, and pay the influencers for their work. For their part, influencers who care about their own reputations should be sure they only accept work for products they can endorse in good conscience."

This kind of professional approach has served @DearMishu and Gordon well. For nearly a year, Gordon, who is a Type 1 diabetic, had been trying to get his insurance company to reimburse him for emergency insulin he had purchased out of pocket. In frustration, he decided to turn to man's best friend, his dog Mishu, and her social media community.

The post on Instagram and Twitter read: "Dear Mishu: What do you do when your insurance company wants you to pay for their mistakes? I called @BCBSNC so many times, but they are not helping. ~ NG.” 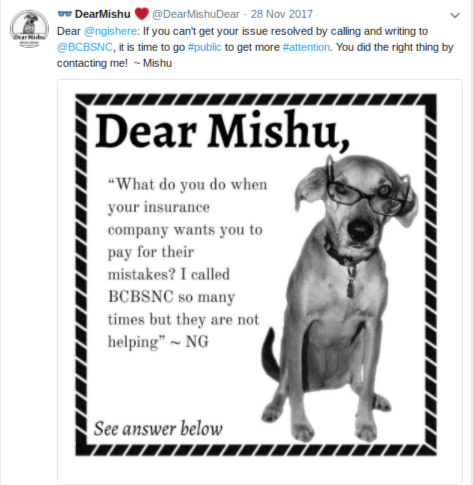 "Within a few hours, I had a social media agent from the company reach out to me, and within a week I had a resolution to an issue that I had been trying to solve for almost a year, over dozens of phone calls from me and my doctor," said Gordon. "I was so impressed by Blue Cross Blue Shield of North Carolina. Some companies have social media teams that are just focused on PR and getting unhappy customers to be quiet. In the case of BCBSNC, they've empowered their social media team members to be problem solvers, and they've recognized that social media influencers really do have influence with their followers."

The story doesn't end there: @DearMishu thanked the insurance company on social media - both after the initial contact and again once the problem was resolved. "I hope this case shows that social media influencers can be good citizens - and can be an asset both to their followers and the brands they interact with," said Gordon. "Micro-influencers like @DearMishu are really connected to their followers, and many won't accept a job that they don't really believe in and think will benefit their followers. Understanding this relationship, but also approaching them as professionals will ensure a good experience for brands."

Dear Mishu is an advice columnist and a character based on Mishu, a rescue dog, with over 70k followers across social media platforms. Dear Mishu brings a dog's innate and simple wisdom to solving friendship, love, career and general life problems for humans and dogs. Dear Mishu can be found on http://www.dearmishu.com or @dearmishu on Instagram or @dearmishudear on Twitter.