Death Row Records to Pivot to a More Optimistic and Uplifting Sound, According to New CEO Alexander Everest Skip to main content

Death Row Records to Pivot to a More Optimistic and Uplifting Sound, According to New CEO Alexander Everest

In a premeditated change of artistic direction, new CEO Alexander Everest says he will guide the well-known record label to develop a new sound more in line with his own Christian values.

TARZANA, CA / ACCESSWIRE / June 4, 2021 / The new ownership team of the historic hip-hop label Death Row Records officially announces it intends to take the label in a totally new musical direction, with a firm emphasis on optimistic and uplifting music. The record company's previous incarnation, founded in 1992 by, amongst others, Dr. Dre and Suge Knight and home to artists such as Tupac Shakur and Snoop Dogg, had established itself as the premiere label for West Coast gangsta rap in the 1990s. 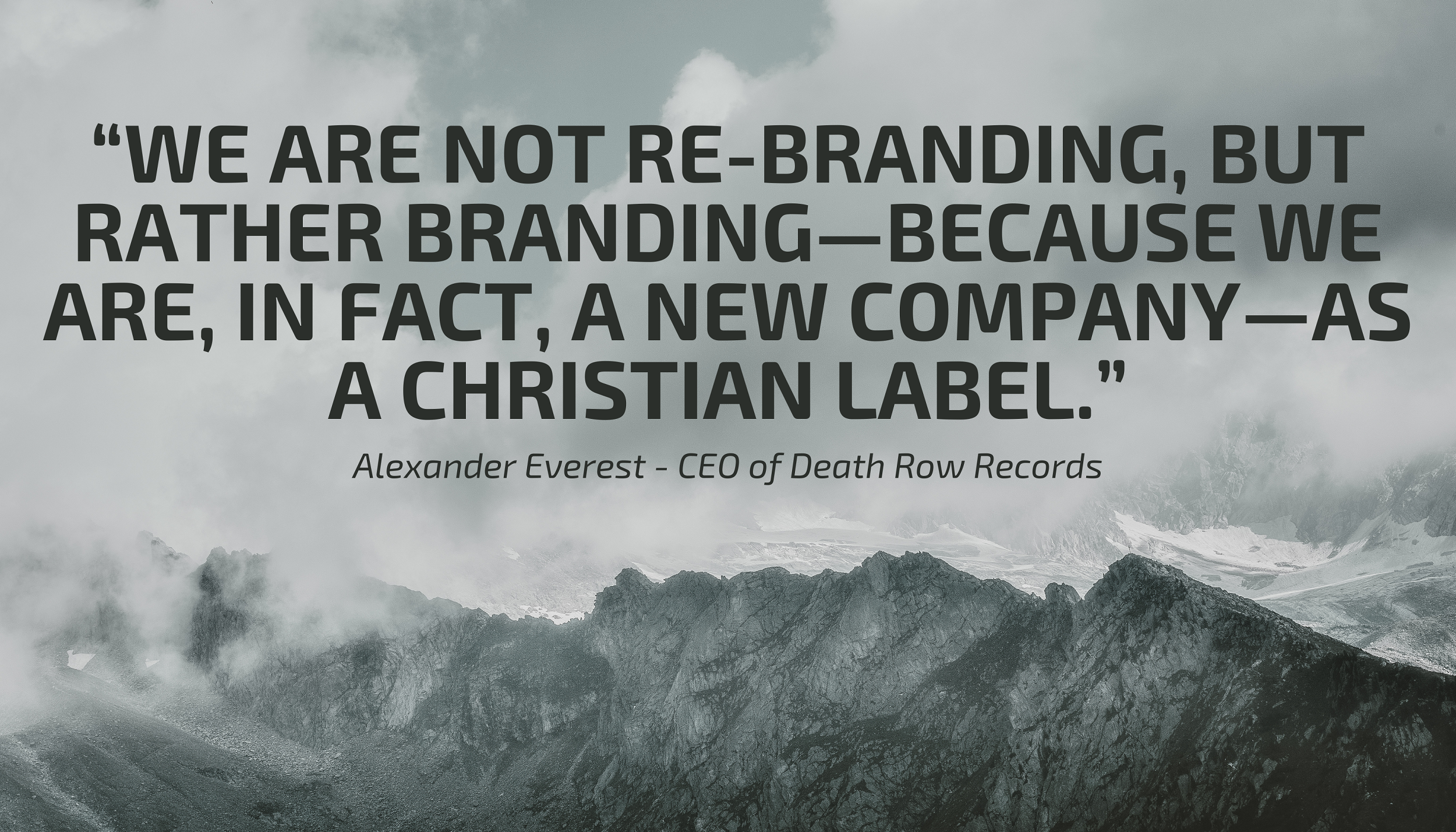 In a statement taken from a recent interview, the new CEO of Death Row Records, Alexander Everest, outlines the label's radical change in culture, "We want to give encouragement to people. We want to infuse human kindness and the human touch and human sincerity into our music. We want to keep our main focus, which is encouraging people with the gospel of Jesus Christ through our music."

When asked if he plans to keep hip-hop and rap music as the label's main focus, Alexander Everest replies, "I'm absolutely open to producing gospel hip-hop music. One recent album that comes to mind is Kanye West's Jesus Is King." But Dr. Everest is careful not to pigeonhole the re-born Death Row Records as a label that produces hip-hop and rap music exclusively. "Hip-hop would be one of the genres of music we produce," he remarks, adding, "we are open to contemporary Christian music, gospel music, and fundamental music. We just want to produce good music that honors the Lord and that is uplifting and gives encouragement to people."

Pressed about Death Row Records' well-documented history of releasing controversial music, including multiple albums involving the glorification of sex and violence, Dr. Everest is careful to differentiate the new company from the old one. "We are not using any of the old genres or any of the old music catalog or material," he asserts, adding, "we are not re-branding, but rather branding because we are, in fact, a new company as a Christian label."

Addressing the question of when the public can expect to hear the brand new optimistic and uplifting sounds of Death Row Records, Alexander Everest responds, "We are planning to release music in 2021. We are really looking forward to it."

Those curious about the new culture and artistic direction of Death Row Records are encouraged to keep watch for more news about the label in the coming weeks and months.

Alexander Everest is a healthcare executive with over 20 years of experience in key positions in the healthcare industry. He began his career as a student at the Veteran's Affairs (VA) Medical Center, all the while learning the finer points of healthcare administration from his late father, Dr. Edwin Everest. Following four years spent at the VA, Alexander Everest joined his father's firm, West Coast Healthcare Consultants, simultaneously studying toward earning a PhD in Healthcare and Business Administration. He earned his doctorate in 2014, and then proceeded to join his father's firm full time.

In the course of their business, Alexander Everest and his father noticed a recurring problem of healthcare professionals from overseas facing significant roadblocks in becoming licensed to practice medicine in the United States, whether it be through preparedness or discrimination in the residency placement process. After his father passed away in 2008, Alexander Everest took control of the business and developed it into residentsmatch.com, a sophisticated website that provides consulting services to aspiring physicians who need help navigating the complex medical residency process in the US.

Pursuant to his ongoing passion for higher learning, Alexander Everest is currently studying to earn a Doctorate in Theology and Biblical Studies. He also volunteers with the charitable organization Children of the Night, which helps to rescue young girls and boys from sex trafficking.