WHITE ROCK, BC / ACCESSWIRE / June 01, 2021 / TDG Gold Corp (TSXV:TDG) (the "Company" or "TDG") is pleased to announce the extension of its Baker and Shasta mining leases until Sep 10, 2051 and June 13, 2050 respectively. TDG completed its acquisition of the Toodoggone District assets of Talisker Resources Ltd. ("Talisker") in December 11, 2020 which included the Baker and Shasta mining leases and surrounding mineral claims, and the Mets mining lease - all located within the historical Toodoggone Production Corridor.

The extension of the Baker and Shasta mining leases also triggers the transfer of the existing Mines Act Permit to TDG, which defines a Permitted Mine Area ("PMA") covering just over 175 hectares (see Figure 1 below) and enables the undertaking of certain activities within its boundary including exploration. Over 90% of TDG's proposed drillholes for the imminent 2021 field season at Shasta fall within the PMA. The Shasta 2021 drill program of 4,000-6,000 metres is designed to test historical drilling results as well as extensions to the known mineralization at Shasta. Drilling is expected to commence in early August 2021 after further surface sampling and mapping work at Shasta has been completed. 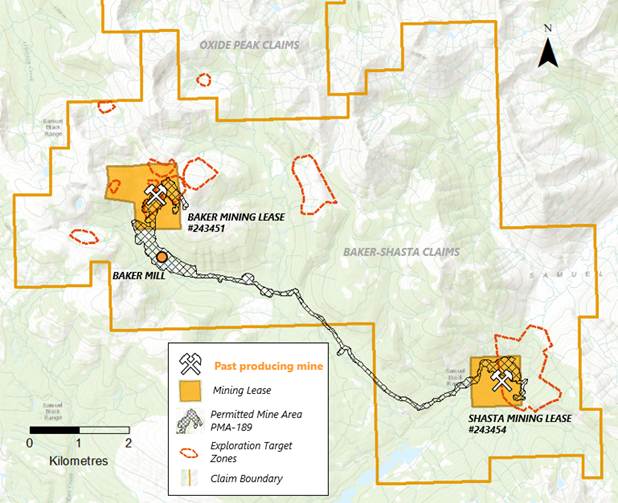 TDG would like to thank First Nations for their consultation and support during the applications for the extension of the Baker and Shasta mining leases, and also the teams at Talisker, Falkik Environmental Consultants and the BC Ministry of Energy, Mining and Low Carbon Innovation ("EMLI") for their input and management of the application process.

As part of the 30-year extensions to the Baker and Shasta mining leases and transfer of the Mines Act Permit, TDG has agreed to provide reclamation and security bonding for the PMA which includes the roads, Baker mill, Baker and Shasta mines and tailings storage facilities; and, TDG has agreed to maintain the PMA in compliance with the requirements of the Mines Act permit including a comprehensive environmental monitoring program which will be undertaken in 2021 by Chu Cho Environmental LLP ("Chu Cho") and Sasuchan Environmental LP ("Sasuchan") in partnership with other sector experts. Both Chu Cho and Sasuchan are wholly owned and operated by Tsay Keh Dene and Takla First Nations respectively.

The technical content of this news release has been reviewed and approved by Andy Randell, PGeo., a qualified person as defined by National Instrument 43-101.

TDG is a major holder of mineral claims and mining leases in the historical Toodoggone Production Corridor of north-central British Columbia, Canada, with over 23,000 hectares of brownfield and greenfield exploration opportunities under direct ownership or earn-in agreement. TDG's flagship projects are the former producing, high-grade gold-silver Shasta, Baker and Mets mines which are all road accessible, produced intermittently between 1981-2012, and have over 65,000 metres of historical drilling. In 2021, TDG proposes to advance the projects through compilation of historical data, new geological mapping, geochemical and geophysical surveys, and drill testing of the known mineralization occurrences and their extensions. TDG currently has 64,423,459 common shares issued and outstanding.