LAS VEGAS, NV / ACCESSWIRE / May 26, 2021 / THC Therapeutics, Inc. (THCT), a forward-thinking, publicly-traded technology company, whose mission statement is, "Better Health through the Science of Nature," is pleased to announce today that the company is exploring entering the precious metals industry as an online, physical precious metals dealer* to engage in retail and B2B sales of silver bullion. 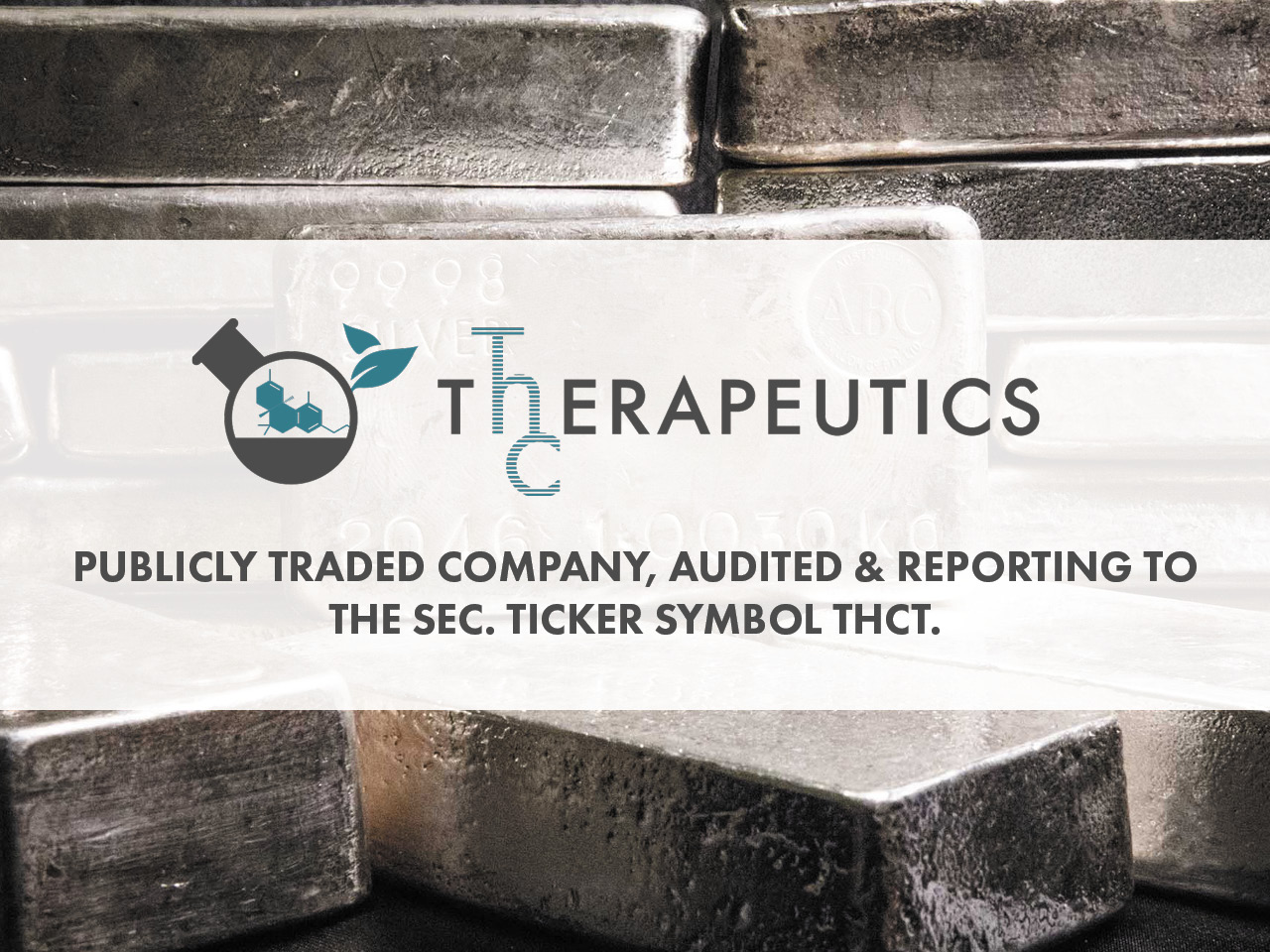 The company would operate these activities through a wholly-owned subsidiary, THCT Silver, which would be intended as an online-based precious metals dealer* open to the public with a niche focus on business-to-business client relations. THC Therapeutics has been accumulating physical silver since February of 2021. The company plans to continue to acquire physical silver and increase the volume of physical silver held on the company's balance sheet over time.

We understand there are publicly traded companies such as Tesla and MicroStrategy that are now holding bitcoin/cryptocurrencies as assets. While this may be a great idea, we prefer silver, which is a physical asset that numerous industrial applications require. Our Founder & CEO, Brandon Romanek, has over 15 years of experience as a dealer in the precious metals market. Through the longstanding relationships developed by Mr. Romanek, we believe he has the potential to facilitate large transactions for physical silver at highly competitive pricing and low premiums relative to the market.

Brandon Romanek, the company's Founder and CEO, states, "I received positive feedback from shareholders of THCT after we made the announcement that we were holding physical silver. Because of the initial indications of shareholder interest, we further assessed what opportunities might be available in connection with precious metals, and we evaluated the possibility of selling silver to other publicly traded companies, which would allow them to convert some of their cash holdings into physical silver. In my opinion, it may be beneficial for some companies to diversify cash holdings for protection against the continued devaluation of fiat currencies, possible hyper-inflation, global instability, and other potential vulnerabilities. Silver, unlike nearly any other asset, has been used as currency for more than 4,000 years and in industry for more than 100 years."

"Several large banks and institutions have agreed to pay substantial settlements in lawsuits brought against them for accusations of precious metal market manipulation and the illegal practice known as ‘spoofing.' This manipulation may come to an end with a proportional move in silver prices. Silver reached a price of $50/oz in 1980, which would be equal to over $100 per oz today after adjusting for inflation. Since the beginning of the year, there has been an ongoing campaign known as the ‘SILVER SQUEEZE/SILVER SHORTSQUEEZE' with retail investors and groups, such as those on Reddit, Twitter, WallStreetBets and WallStreetSilver, which are believed to have contributed to changes in the landscape of the silver market. During this time, demand for physical silver rose to the point that many bullion dealers were unable to quickly fill orders. Silver has historically been purchased by the 50+ age demographic, and there may now be an increase in demand from younger generations contributing to the overall increase in demand. This overall increase in demand has generally caused premiums and delivery lead times to increase with many precious metals dealers."

"My more than 15 years of experience of being involved in the precious metals industry may allow THCT Silver to source physical silver and receive timely delivery at competitive premiums. It has long been a personal goal to get as much silver into the hands of buyers as possible. Because as more people buy, sooner rather than later, this could have the potential to EXPOSE THE DECADES LONG MANIPULATION OF THE SILVER MARKET, so that true price discovery may finally occur!" concluded Mr. Romanek.

*To be licensed as a second-hand mail-in precious metals dealer in the state of Florida, which license should permit the online resales of physical precious metal bullion and other products.

THC Therapeutics, Inc. (THCT) is focused on developing their patented dHydronator®, a sanitizing herb dryer. The main function of the dHydronator® is to greatly accelerate the drying time of cannabis while sanitizing it. The dHydronator® can be used to dry a variety of herbs; it has been specifically tested for use with cannabis, and it can reduce the drying time for cannabis from 10-14 days to less than 14 hours. The Company may also focus some of its future operations on participation in cannabis-testing lab facilities and developing personal wellness centers. The Company is seeking partnerships in the Cannabis & Health/Wellness industries in the United States & Canada, in addition to the Company's product development in the cannabis industry.

Any statements that are not historical facts contained in this press release are "forward-looking statements" as that term is defined under the Private Securities Litigation Reform Act of 1995 (PSLRA), which statements may be identified by words such as "expects," "plans," "projects," "will," "may," "anticipates," "believes," "should," "intends," "estimates," and other words of similar meaning. Such forward-looking statements are based on current expectations, involve known and unknown risks, a reliance on third parties for information, transactions that may be cancelled, and other factors that may cause our actual results, performance or achievements, or developments in our industry, to differ materially from the anticipated results, performance or achievements expressed or implied by such forward-looking statements. Factors that could cause actual results to differ materially from anticipated results include risks and uncertainties related to the fluctuation of global economic conditions or economic conditions with respect to the cannabis industry, the performance of management, actions of government regulators and vendors, our ability to obtain financing, competition, general economic conditions and other factors that are detailed in our filings with the Securities and Exchange Commission ("SEC"). We intend that all forward-looking statements be subject to the safe-harbor provisions of the PSLRA.