The Games Presented at the Festival Garnered Enormous Impact Along with More than 5,000 Business Meetings

SÃO PAULO, BRAZIL / ACCESSWIRE / May 26, 2021 / Brazil's Independent Games (BIG) Festival, the largest independent games festival in Latin America, has once again come and gone, and this year's event saw record numbers across the board. Between the more than 545 companies from 64 countries present at the event and panels from some of the industry's biggest names, BIG Festival was a smashing success for everyone involved, especially the hundreds of indie developers looking to make some business connections. An incredible 40 million estimated users accessed the games of BIG Festival across the Microsoft Store, Google Play, and App Store. This astounding number provides even more evidence of the accelerated growth being seen in the Brazilian gaming industry - the 13th largest video game market globally and second in Latin America. 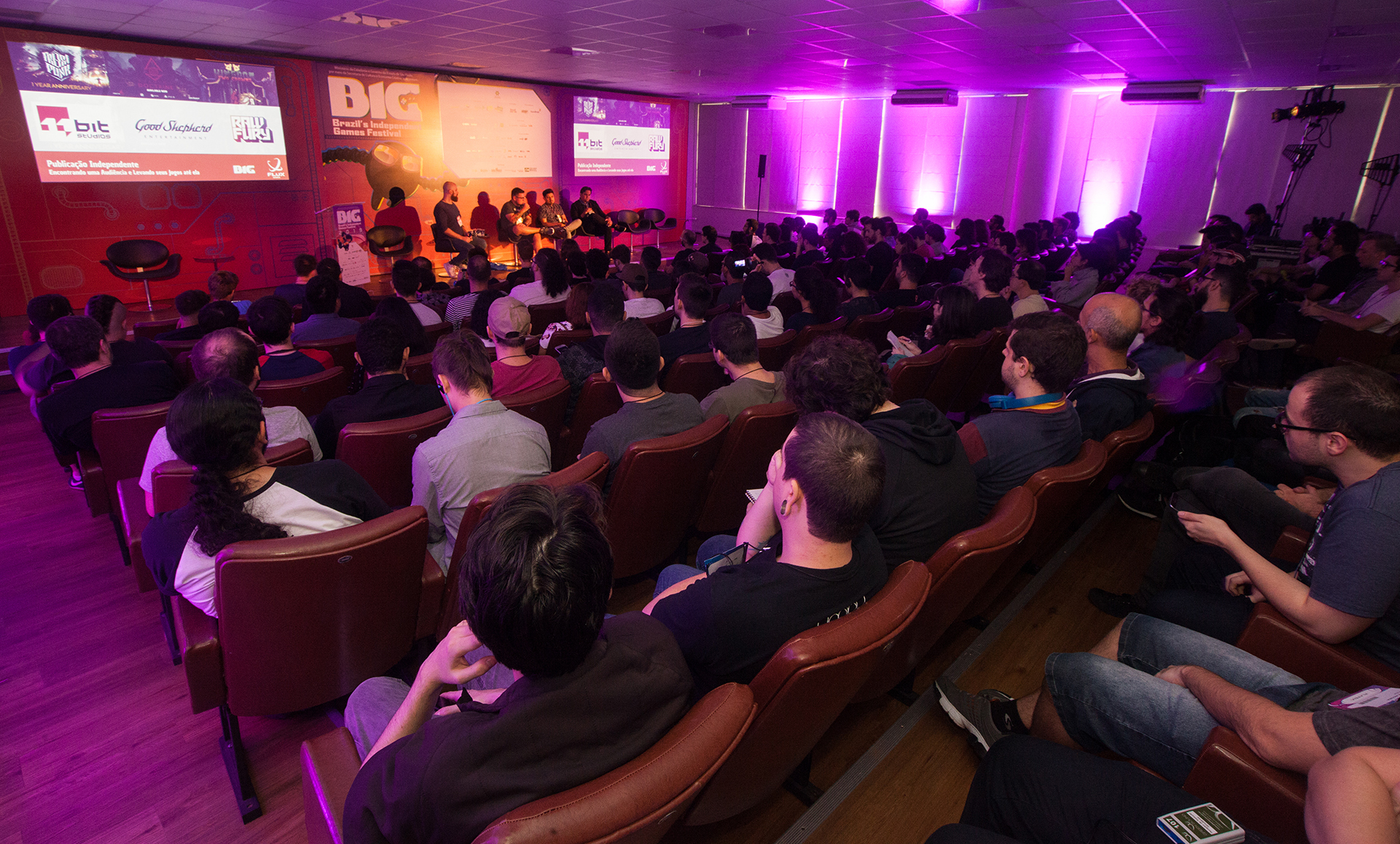 "If in 2020 we were taken by surprise by the pandemic, this year, we were prepared to deliver a very high-quality online experience," said Gustavo Steinberg, director of BIG Festival. "Precisely due to the online format, we were able to increase the number of panels and bring in international speakers, a more complicated task in a face-to-face event. In addition, we managed to reach people from all regions of the country and the world."

"BIG Festival has always been a special time to discover and talk about the local independent gaming scene," said Eliana Russi, executive manager of the Brazil Games Project. "In 2021 that moment was even more important for business, as our meeting platform registered more than 545 companies from 64 countries in search for business."

The panels at this year's event were viewed more than 790,000 times and included Capcom's presentation about Resident Evil that showcased the first game in the franchise to be dubbed in Brazilian Portuguese, as well as introducing the stellar voice actors for the first time. The site itself attracted more than 2 million viewers throughout the week, which for the first time ever allowed viewers to play the games and try the demos from the comfort of their own homes. 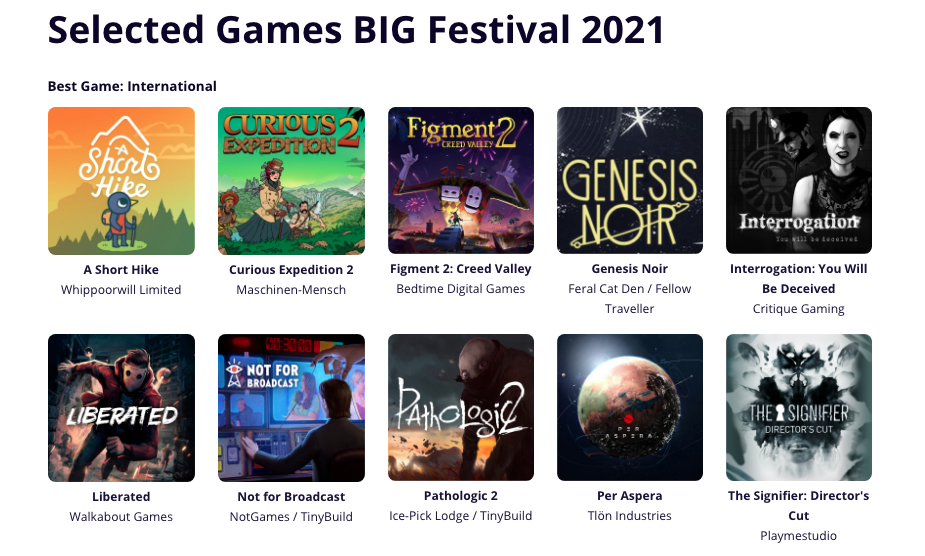 Of course, what BIG Festival is truly about is generating business and growing partnerships between developers and publishers, and this year's edition was an astounding success for the many studios, publishers, and investors in attendance. As the most important hub in the independent games market in Latin America, Brazil and BIG Festival serve as the nexus for business development and partnership in the gaming industry, and in 2021 saw a staggering 5,642 business meetings. The launch of a new Job Portal, where companies can seek qualified labor and aspiring industry workers can find opportunities for work, witnessed more than 1,000 registered professionals sign up.

With support from Brazil Games Export Program, a partnership between the Brazilian Game Companies Association, ABRAGAMES, and the Brazilian Trade and Investment Promotion Agency (Apex-Brasil), BIG Digital carries the traditions of its massively successful physical counterpart as a fundamental business hub for video game professionals across the globe through its lectures, networking events, and digital face-to-face meetings. It was a golden opportunity for developers, not just those in Brazil, but from a global audience, to meet with giants in the segment, such as Nintendo, Microsoft, Sony, Ubisoft, Google, HTC, Xbox Game Studios, Bioware, and Epic Games, who see BIG as an opportunity to see Brazil's video games industry up close.

A press kit can be found here: https://uberstrategist.link/BIG_Festival_Presskit.

BIG Festival, which received more than 20,000 visitors in 2019, is the largest and most important game festival in Latin America. Since 2012, the event has become a central meeting point for studios to attend lectures and workshops, network, and meet with industry peers to learn more about the business of gaming. BIG has helped hundreds of innovative games from all over the world connect with an international audience. Networking opportunities held at the event generated more than 4,000 meetings between 630 game industry professionals from 34 countries. In light of complications resulting from the global pandemic, BIG Festival transitioned to an online-only event, BIG Digital in 2020, and the Festival still managed to draw record numbers, with more than 22,000 viewers tuning in to the event online. The BIG Festival's digital version generated 3,876 business meetings between more than 333 publishers, developers, and investors from a stunning 38 countries. These vital interactions led to an estimated $7 million USD in business deals!

For more information about the upcoming event, visit the official website: https://www.bigfestival.com.br/.

Brazil Games is the export program created by the Brazilian Independent Game Companies Association, ABRAGAMES, in partnership with Apex-Brasil, the Brazilian Trade and Investment Promotion Agency. Our goal is to promote the Brazilian Indie Game industry internationally, developing new business opportunities for our companies. The Brazil Games Program also promotes Brazil as the hub for business in Latin America and invites buyers, investors, and publishers for BIG Festival, Brazil's Independent Games Festival, the most important international indie games festival, and the hub for international business in Latin America.

The Brazilian Trade and Investment Promotion Agency (Apex-Brasil) works to promote Brazilian products and services abroad and to attract foreign investment to strategic sectors of the Brazilian economy. The Agency's efforts comprise trade and prospective missions, business rounds, support for the participation of Brazilian companies in major international trade fairs, the arrangement of technical visits of foreign buyers and opinion makers to learn about the Brazilian productive structure, and other select activities designed to strengthen the country's branding abroad. Apex-Brasil also plays a leading role in attracting foreign direct investment (FDI) to Brazil, by working to identify business opportunities, promoting strategic events, and providing support to foreign investors interested in allocating resources in Brazil.