VANCOUVER, BC / ACCESSWIRE / May 4, 2021 / Sierra Madre Gold and Silver Ltd. ("Sierra Madre" or the "Company") (TSXV:SM) is pleased to provide an update on the field activities at its Tepic Silver Gold project located in the State of Nayarit, Mexico. Work for the last 6 months has focused on geologic mapping and reconnaissance sampling with approximately 50% of the project covered at a 1:5000 scale level of detail or better. This has resulted in the recognition of more than 10 kilometres of hydrothermally altered and mineralized structures compared to the 3.5 kilometres known at the time the Company optioned the project. The reconnaissance sampling has returned silver ("Ag") values ranging from <0.5 to 648 grams per ton ("g/t") and gold ("Au") values from <0.005 to 7.43 g/t. 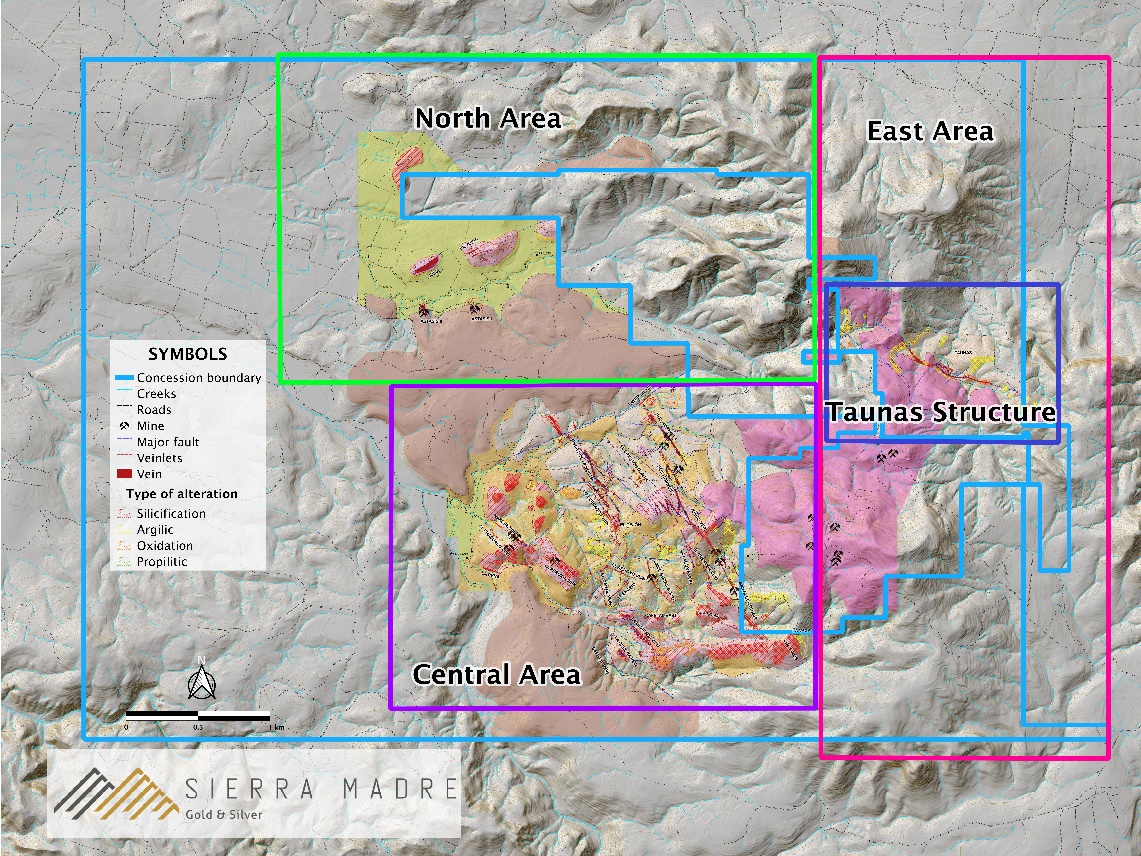 The major findings of this program thus far are:

The Company plans on continuing this reconnaissance mapping and sampling until the entire concession holding has been mapped. Based on the above the company has initiated a 2,700 metre trenching program.

When the Company optioned the Tepic project, the previous owner's efforts had centered on the Dos Hornos - Veta Thomas and Once Bocas areas. The following map shows the known mineralized structures at the time of acquisition. 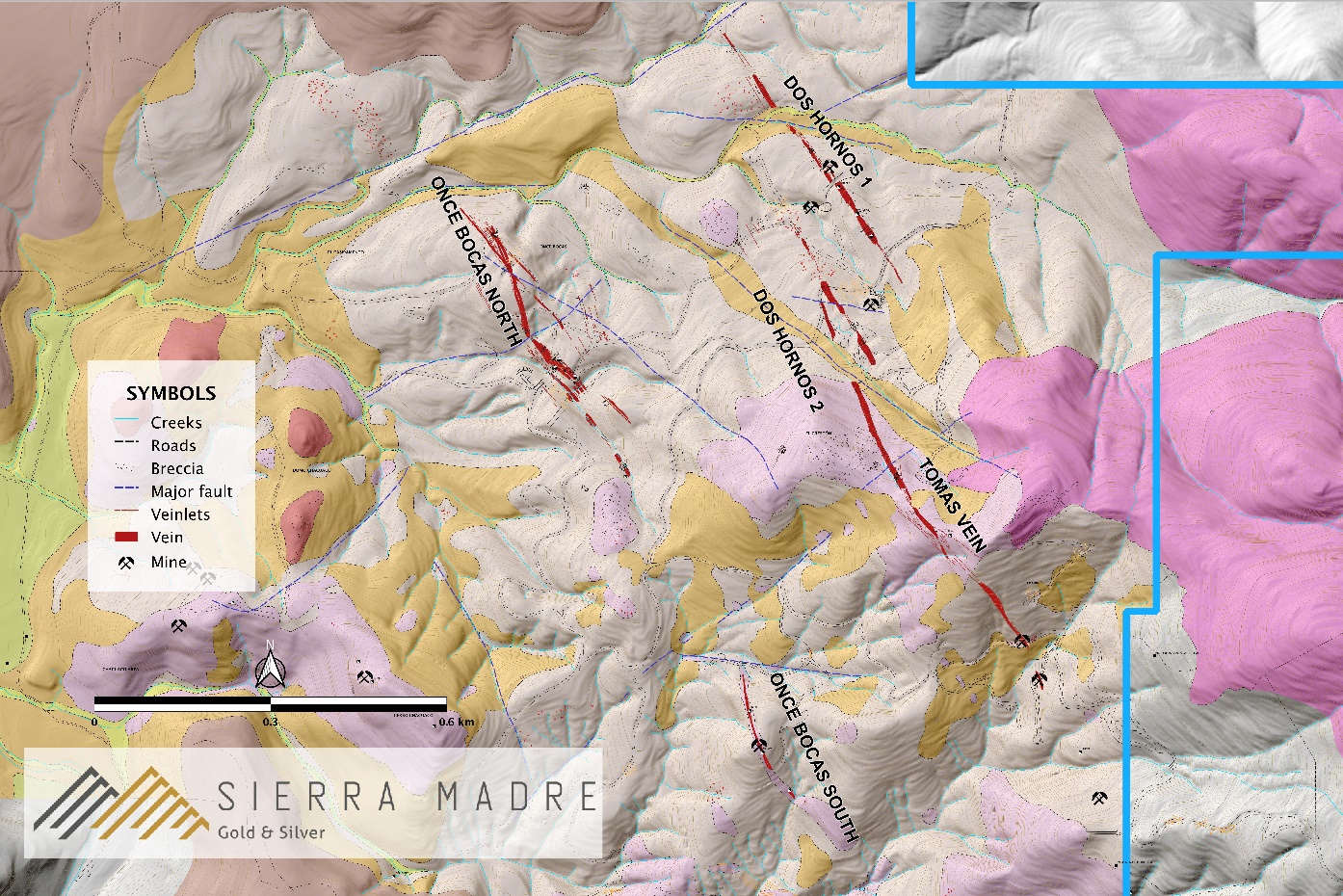 Mapping and field work by the Company's geologists has found the structural fabric of the area to be much more complex than previously portrayed. Numerous mineralized cross faults and several more northwest trending principal structures have been located. 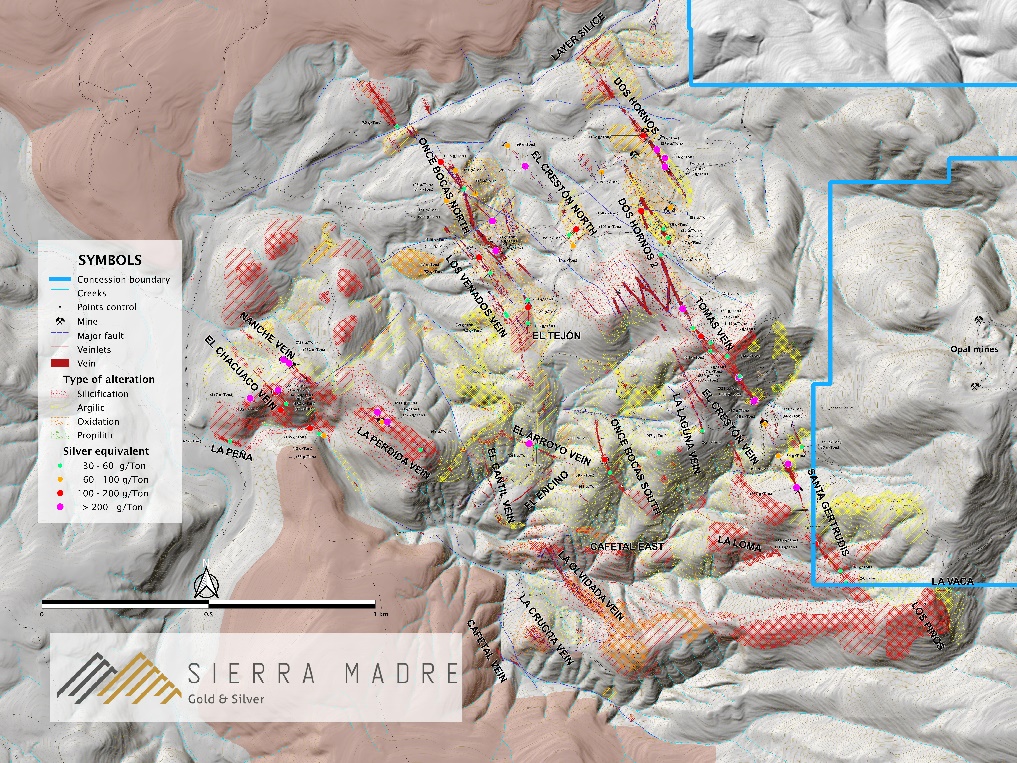 Highlights of reconnaissance sampling at the newly found El Creston structure include 788 g/t silver equivalent ("AgEq") on the Nanche vein, and 798 g/t AgEq on the Veta Tomas structure (silver equivalent values calculated using a 70:1 silver to Gold ratio reflective of precious metal prices of $25/ounce for silver and $1,750 for gold).

A 2,000 metre trenching program is being planned to establish the width and potential of the newly identified structures, areas containing structural intersections and potential dilation zones. Trenches will also be excavated on previously defined structures as no methodical surface trenching program has ever been conducted on the Tepic Project. Existing road cuts will also be sampled. Data from this work will be used in future geologic modelling and resource estimation.

There is no record of the previous operator having conducted work on the eastern side of the project and much of the area is covered by a thin layer of colluvium. First pass mapping and reconnaissance sampling by the Company's geologic team has resulted in the delineation of the Taunas structure.

Taunas has a strike length in excess of one kilometre and consists of a core quartz vein/breccia structure, with widths of up to 15 metres, surrounded by a silicified and stockwork zone with argillic alteration. Rock textures such as bladed quartz after calcite are present, indicating that this structure is in the upper portion of the boiling zone one of the key controls responsible for precious metal deposition. In addition, the structure lies between 1160 MSL and 1400 MSL, substantially higher in elevation than most mineralized structures outcropping in the central zone. 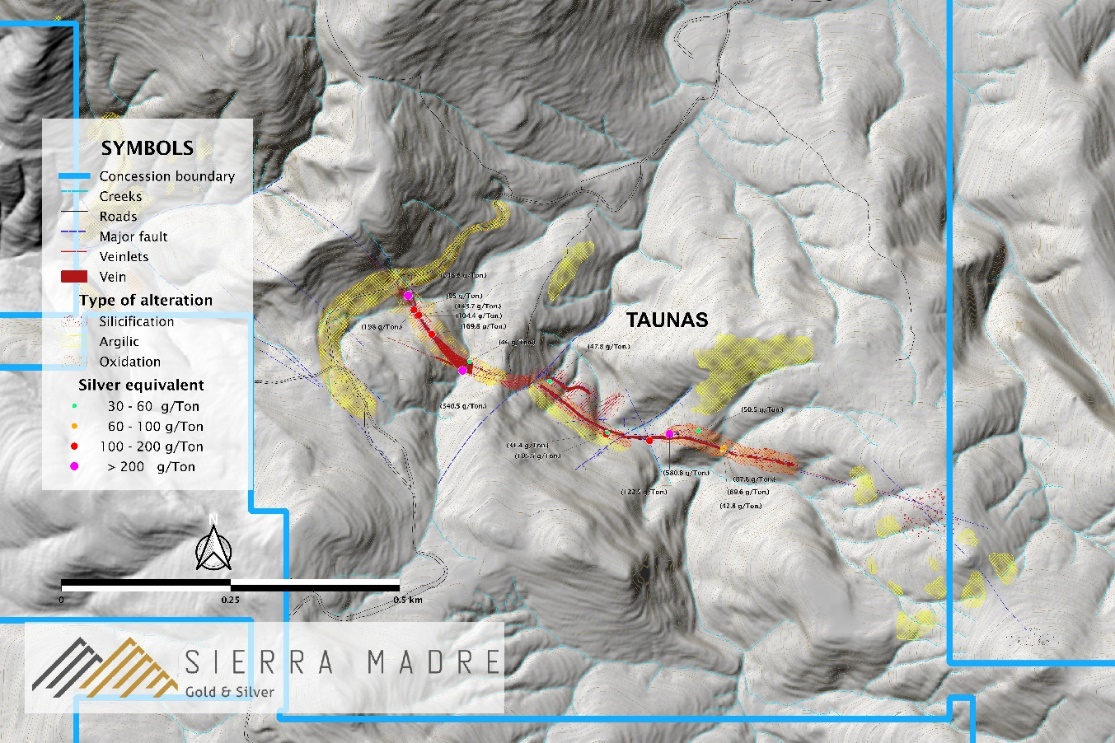 A trenching program is planned in order to assess the potential size and grade of the Taunas target. Further reconnaissance mapping and sampling is planned for the entire east side of the project area and a new senior geologist has been added to the team to oversee these activities.

North of the central area, multiple erosional windows occur in the recent basalt flows which expose hydrothermal veins and alteration in the underlying rhyolitic rocks. These occurrences had been noted by previous operators but little follow up work had been undertaken.

Mapping and reconnaissance sampling by the Company has produced results that indicate the area has greater potential than previously thought. Reconnaissance sampling returned silver values ranging from <0.5 to 600 g/t silver, and gold assays from<0.005 to 1.22 g/t with AqEq values including 686 g/t AgEq. The following map shows the location of samples which assayed greater than 30 g/t AgEq. 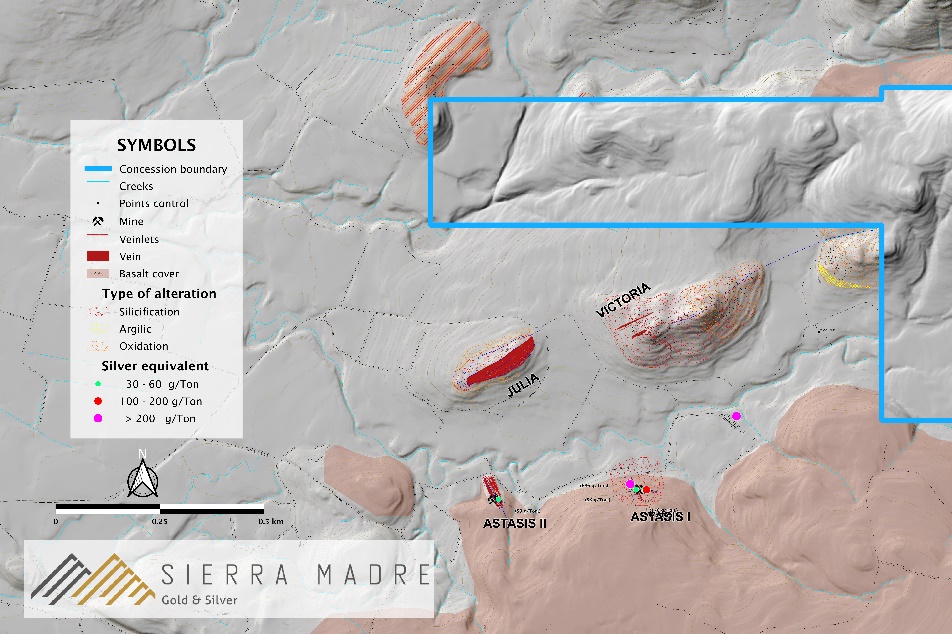 The results of reconnaissance sampling thus far indicate the Astasis area to be of greatest interest, with one sample from a vein exposed in a steep arroyo cut at Astasis I assaying 686 g/t AgEq. This area is densely vegetated and covered by colluvium containing abundant quartz breccia fragments. A trenching program is planned in order to sample bedrock below the colluvial cover.

A larger program to map and sample additional ridges rising above the basalts and valleys incised through the basalts is underway.

Sierra Madre is committed to best practice standards for all exploration and sampling activities. The Company's exploration programs have been conducted following CIM Exploration Best Practice Guidelines which are incorporated by reference in NI 43-101. Analytical quality assurance and quality control procedures include the systematic insertion of blanks, standards and duplicates into the sample strings. Samples are placed in sealed bags and shipped directly to Bureau Veritas Lab located in Durango, Mexico for 30 gram gold fire assay and multi-element analyses by acid digestion.

Mr. Gregory Smith, P. Geo, Vice President of Exploration of Sierra Madre, is a Qualified Person as defined by NI 43-101, and has reviewed and approved the technical data and information contained in this news release. Mr. Smith has verified the technical and scientific data disclosed herein and has conducted appropriate verification on the underlying data including confirmation of the assay data files against the original sample descriptions and assay certificates.

Sierra Madre Gold and Silver Ltd. is a mineral exploration company, currently focused on the acquisition, exploration and development of the Tepic Property in Nayarit, Mexico. The Company has an experienced management team with a proven track record of wealth creation in Mexico through project discovery, advancement and monetization. Sierra Madre's key objective is to advance exploration on the Tepic Property to determine whether it contains commercially exploitable deposits of precious or base metals.

On behalf of the board of directors of Sierra Madre Gold and Silver Ltd.,

This press release contains "forward-looking information" and "forward-looking statements" within the meaning of applicable securities legislation. The forward-looking statements herein are made as of the date of this press release only, and the Company does not assume any obligation to update or revise them to reflect new information, estimates or opinions, future events or results or otherwise, except as required by applicable law. Often, but not always, forward-looking statements can be identified by the use of words such as "plans", "expects", "is expected", "budgets", "scheduled", "estimates", "forecasts", "predicts", "projects", "intends", "targets", "aims", "anticipates" or "believes" or variations (including negative variations) of such words and phrases or may be identified by statements to the effect that certain actions "may", "could", "should", "would", "might" or "will" be taken, occur or be achieved. Forward-looking information in this press release includes, but is not limited to, statements with respect to future events or future performance of the Company, results of or benefits arising from the listing of the Common Shares on the Frankfurt Stock Exchange, the services to be provided pursuant to the Agreements, receipt of all required regulatory approvals including TSXV approval of the Agreements and the Company's plans with respect to the exploration and development of the Tepic Property. Forward-looking statements and information are subject to various known and unknown risks and uncertainties, many of which are beyond the ability of the Company to control or predict, that may cause the Company's actual results, performance or achievements to be materially different from those expressed or implied thereby, and are developed based on assumptions about such risks, uncertainties and other factors set out herein, including, but not limited to, the risk that the Agreements bay not be approved by the TSXV and the factors set out under the heading "Risk Factors" in the Company's final long form non-offering prospectus dated March 31, 2021 available for review on the Company's profile at www.sedar.com. Such forward-looking information represents management's best judgment based on information currently available. No forward-looking statement can be guaranteed and actual future results may vary materially. Accordingly, readers are advised not to place undue reliance on forward-looking statements or information.