KINGSTON, ON / ACCESSWIRE / April 21, 2021 / Delta Resources Limited ("Delta" or "the Company") (TSXV:DLTA)(OTC PINK:DTARF)(FRA:6G01) is pleased to announce results from its follow-up drill campaign on its Oli-Gold discovery at the Delta-2 Gold Property in Chibougamau, Quebec. Significant drill results include:

Seven drill holes were completed during this second phase of drilling for a total of 1,059 metres. Five of the seven drill holes have intersected the mineralized zone and high-grade, visible gold was observed in four drill holes (see attached photos below). 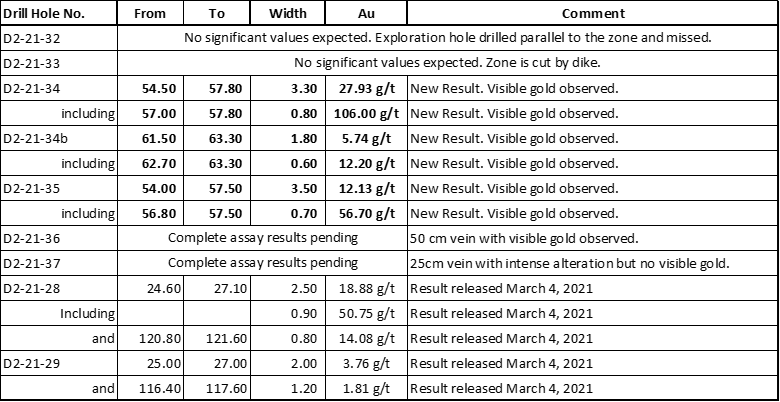 True intercepts are believed to be close to drill intercept lengths.

André Tessier, President and CEO of Delta Resources commented: "This is an amazing start at Delta-2. These are extremely exciting drill intercepts in wide open, underexplored terrain. We still have some work to do to better understand this mineralization and we will endeavour to pursue our drilling at some point during the summer to acquire this knowledge and test additional gold targets that are emerging."

A list of drill hole coordinates is provided in the table below and a summary of all the drill intercepts is shown below on the longitudinal section.

Table of all drill holes to date at the Oli Gold discovery.

The mineralized zones consist of quartz-carbonate-tourmaline-fuschite veins with up to 10% pyrite clusters, and disseminated pyrrhotite, chalcopyrite, sphalerite, and visible gold. Drilling now suggests that these veins are trending between 075 to 080 azimuth with a dip of approximately 70 degrees towards the south. The quartz veins are associated with felsic dikes and locally (such as in drill hole D2-21-33) the dikes crosscut the veins. The mineralization is located approximately one kilometre north-east of the R-14 Gold prospect where gold grades of up to 142.29 g/t Au over core length of 2.44 metres have been reported in the past (Brunelle, 1983 quoted by Faure, 2012). The area between R-14 and the new discovery has never been drill tested despite the presence of two surface gold occurrences (see press release dated March 4th, 2021). Additional mineralized zones are suspected between R-14 and the Oli-Zone.

Assays reported herein were analyzed by SGS Laboratories in Lakefield by metallic sieve method on a "rushed" basis. Remaining samples will be analyzed by fire assay with finish by atomic absorption and results will be released as soon as they become available. 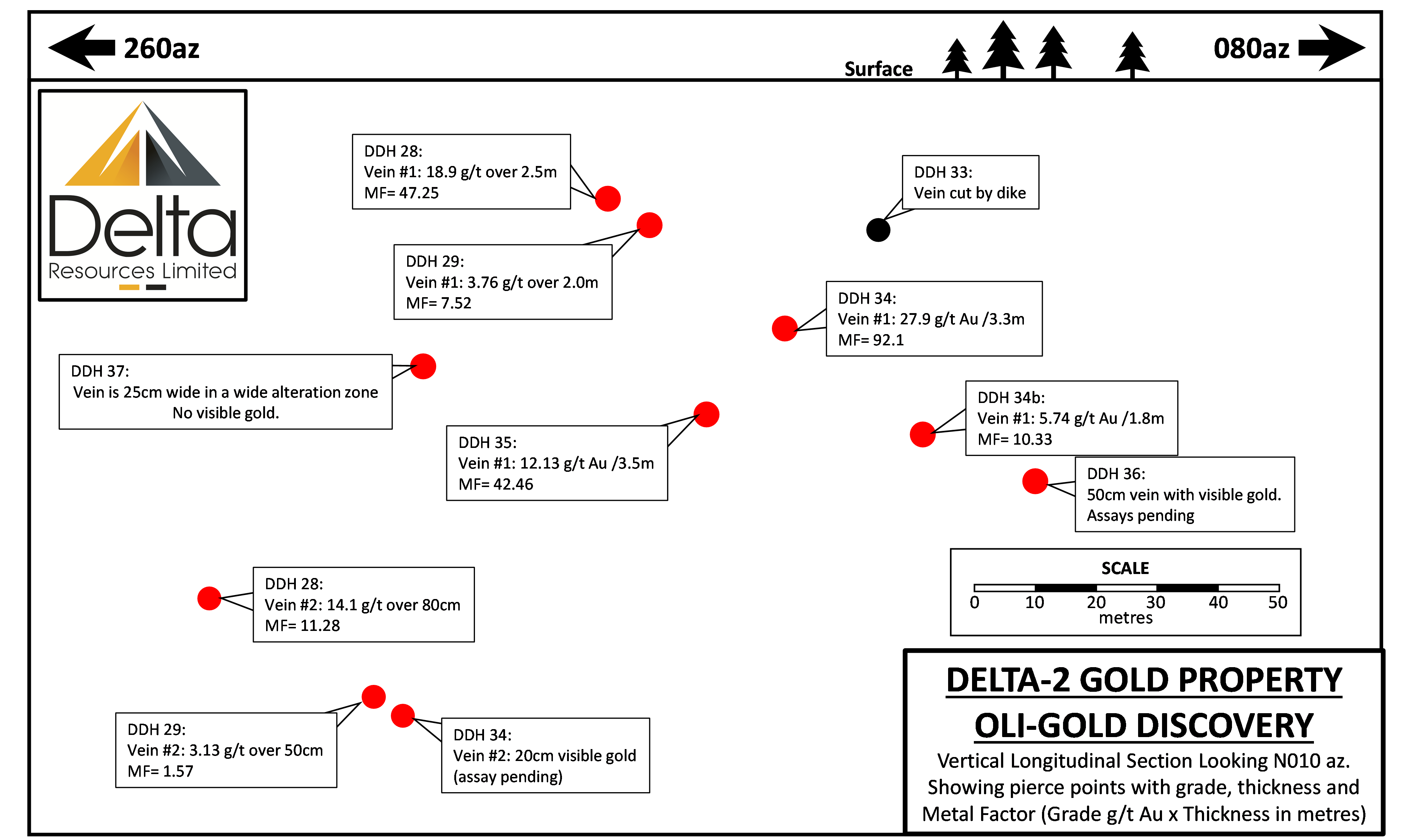 Longitudinal Section of the OLI Gold Discovery at Delta-2 Gold. True thicknesses are believed to be close to drill intercept lengths. Results from drill holes D2-21-28 and 29 were previously released in a March 4th press release.

Core logging and sampling were completed by Laurentia Exploration and Delta Geologists in Chibougamau, Quebec. Drill core is cut in half and one half of the core is sealed in clean plastic bags on site. Standards and blanks are inserted in the sequence of samples on site as quality assurance and quality control in addition to the regular insertion of blank, duplicate, and standard samples accredited by SGS Canada Minerals Laboratories during the analytical process.

Michel Chapdelaine, P.Geo. and Vice-President of Exploration at Delta Resources Limited is a Qualified Persons as defined by NI-43-101 and is responsible for the technical information presented in this press release.

Delta has 36M shares outstanding has a fully funded exploration for 2021 and in addition, is set to receive an additional $1M in scaled payments, from August to December 2021, through the sale of its Bellechasse-Timmins gold project in SE Quebec.

ON BEHALF OF THE BOARD OF DELTA RESOURCES LIMITED.

Some statements contained in this news release are " "forward looking information" within the meaning of Canadian securities laws. Forward looking information include, but are not limited to, statements regarding the use of proceeds of the non-brokered private placement and payment of the debt settlements. Generally, forward-looking information can be identified by the use of forward-looking terminology such as "plans", "expects", "is expected", "budget", "scheduled", "estimates", "forecasts", "intends", "anticipates", "believes" or variations of such words and phrases (including negative or grammatical variations) or statements that certain actions, events or results "may", "could", "would", "might" or "will be taken", "occur" or "be achieved" or the negative connotation thereof. Investors are cautioned that forward-looking information is inherently uncertain and involves risks, assumptions and uncertainties that could cause actual facts to differ materially. There can be no assurance that future developments affecting the Company will be those anticipated by management. The forward-looking information contained in this press release constitutes management's current estimates, as of the date of this press release, with respect to the matters covered thereby. We expect that these estimates will change as new information is received. While we may elect to update these estimates at any time, we do not undertake to update any estimate at any particular time or in response to any particular event.