"We are extremely motivated by the strong mineralization encountered in the first core holes from the 2020 program. These initial results show us that the mineralized zone identified in the 2018 drill program continues to the north and remains open," commented President and CEO, Jonathan Buick. "The second hole was also important because it tested the depth extent of a quartz vein system identified through surface mapping and sampling. We believe the gold encountered in hole 2 is indicative of a new trend that aligns with the orientation of many historical workings in the Orogrande Shear Zone."

Drill hole ICGB2020-1 was drilled directly north of the 2018 drilling to determine if the mineralization discovered in 2018 continues along strike (Figures 1 and 2). It was drilled along an azimuth of 276° with a plunge of -45° to a depth of 299.31 metres. In addition to the reported intervals, ICGB2020-1 intersected significant mineralization at >0.1 g/t gold but below a 5 gram-metres threshold. These intervals include 20 individual core lengths from 1m to 9m with assays ranging from 0.1 to 0.7 g/t gold and 5 individual core lengths from 0.7m to 1.0m ranging from 1.3 to 2.2 g/t gold.

Drill hole ICGB2020-2 was drilled east of the main trend in order to target the downdip extent of mineralized quartz veins mapped at surface (Figures 1 and 3). It was directed along an azimuth of 70° with a plunge of -45° to a depth of 223.24 metres. In addition to the reported intervals, ICGB2020-1 intersected significant mineralization at >0.1 g/t gold but below a 5 gram-metres threshold. These intervals include 12 individual core lengths from 1m to 6m with assays ranging from 0.1 to 0.8 g/t gold and 2 individual core lengths of 1.0m ranging from 1.6 to 3.5 g/t gold.

Results from holes ICGB2020-1 and -2 extend the mineralized signature of the 2018 drill program, intersecting shallow oxide-hosted gold as well as high grade quartz-sulfide vein hosted gold mineralization at depth. The drill program in 2020 has served to further define the geometry of the Orogrande Shear Zone (OSZ) within the Idaho Champion claim block. 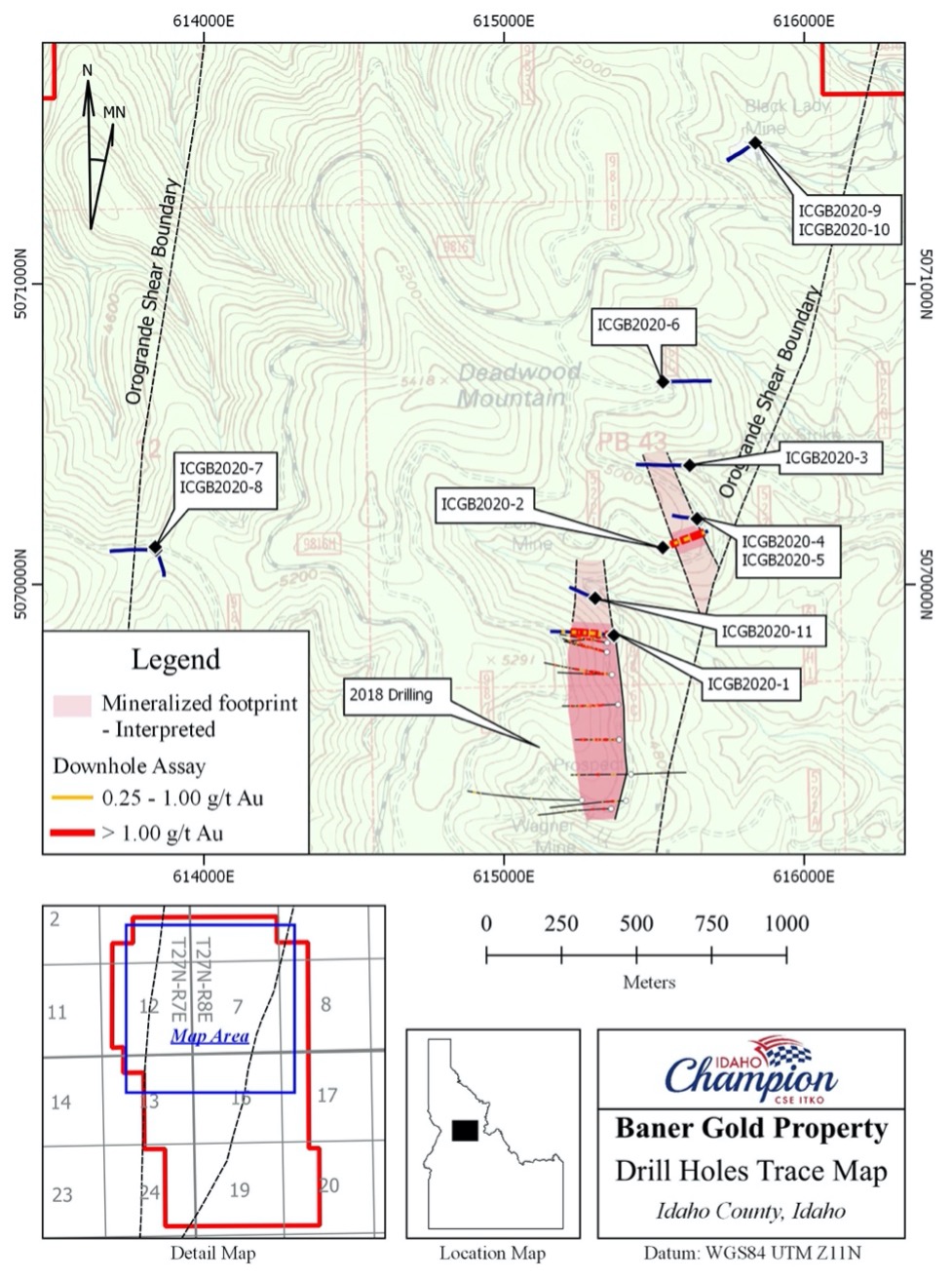 Figure 1. Locations of 2020 diamond drill holes (blue lines) in the context of the Orogrande Shear Zone and 2018 drilling (black lines). Significant Au assay intervals are shown by highlighting in the drill hole trace. 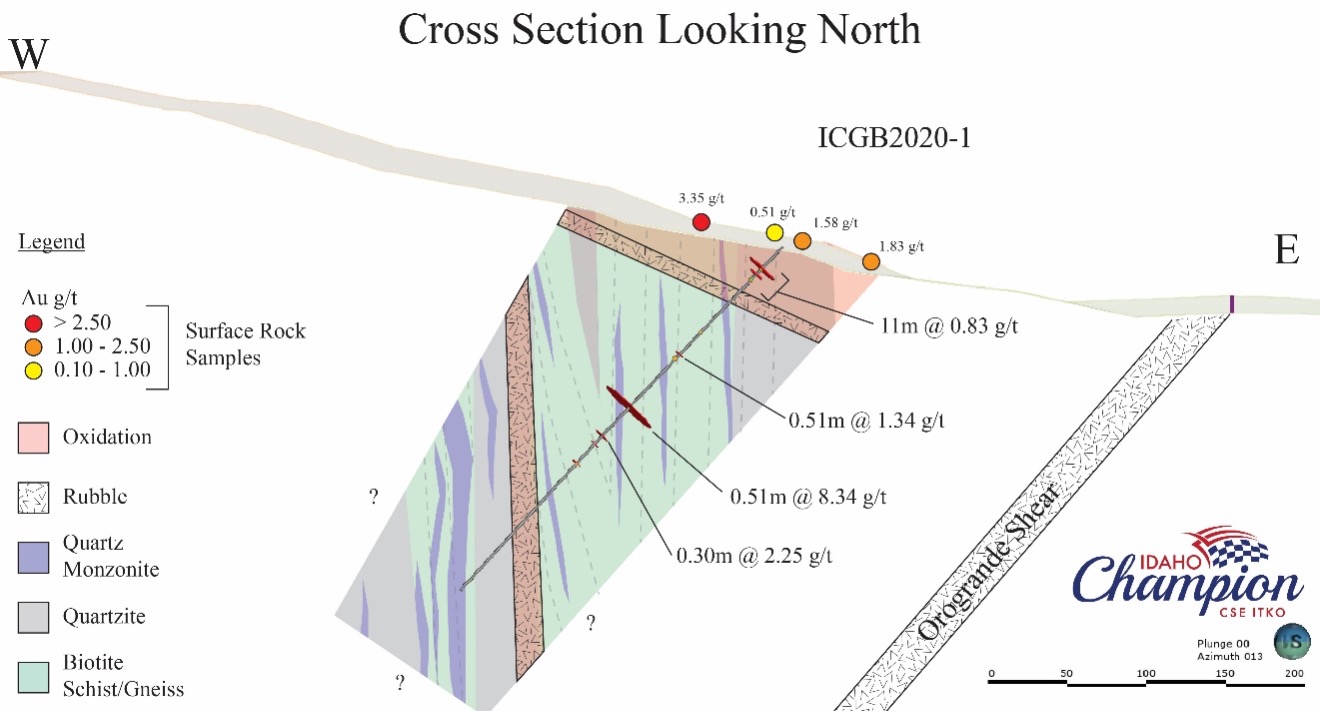 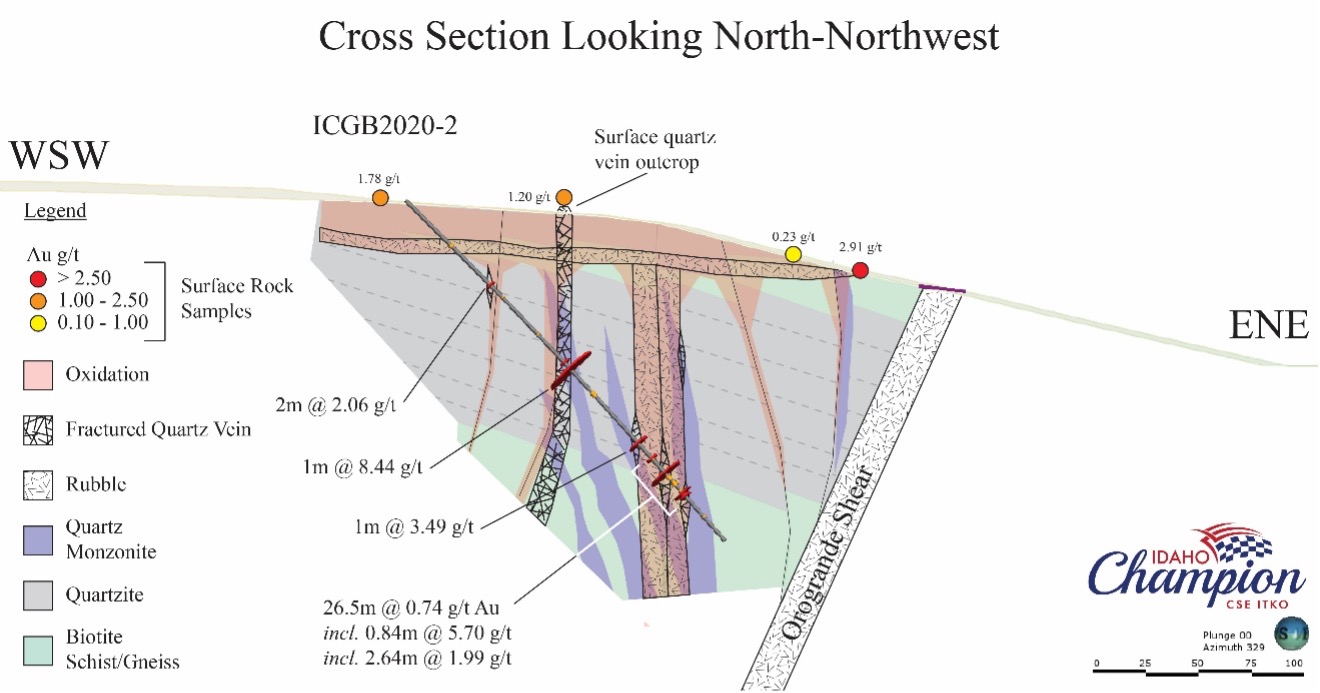 Idaho Champion Gold adheres to a regimented drill core handling and processing procedure. Core from the drill rig(s) is logged for lithology, mineralization, structure, alteration, and veining. During the logging process samples up to 1.5m core length are delineated by company geologists. Core is then photographed and sawn in half. Following sawing, individual samples are extracted from core boxes and inserted into individual sacks with a unique waterproof sample number tag and sealed. The remaining half-core is left in core boxes for storage. Sacks containing samples are kept securely indoors on site until they are transported to the assay lab.

Quality control (QC) samples are inserted into the sample stream such that there is one QC sample for every ten drill core samples. These QC samples consist of certified standards (known metallic content) and blanks (known barren of metals). Two styles of blank material were used: a coarse blank and a pulverized blank. QC sample insertions alternate between standard and blank. Additional core duplicates were inserted into the sample stream where necessitated by geology, i.e. core samples containing wide veins were sawn in half, then one half sawn into quarters and submitted as two separate samples.

This sample shipment was delivered to Bureau Veritas Minerals (BVM) in Sparks, NV. All subsequent sample shipments were delivered to American Assay Labs (AAL) in Sparks, NV, with a small number of samples being analyzed at American Analytical Services (AAS) in Osburn, Idaho. BVM, AAL, and AAS conform to ISO 17025 requirements. All drill samples and coarse blanks are crushed to 70% passing 2mm at the sample prep lab, and 1 kg material is split and pulverized to 85% passing 75 microns. All samples are processed by 30-gram fire assay- inductively coupled plasma - emission spectrometry (ICP-ES). Samples are additionally analyzed for 36 or 47 element analysis by ICP-ES and/or inductively coupled plasma - mass spectrometry (ICP-MS). Samples containing Au or Ag above maximum reporting limits by ICP-ES analysis are automatically re-analyzed by fire assay with a gravimetric finish.

All drill intervals reported in this release are calculated using a 0.10 g/t gold cut-off grade and a maximum of 1-metre consecutive waste and a minimum 5 gram-metres of gold.

About the Baner Project

The Baner Project is located within the Orogrande Shear Zone (OSZ), a 20-kilometre long and up to 1-kilometre wide regional shear zone located in Central Idaho. The OSZ is a transpressional shear zone composed of metamorphosed Proterozoic sedimentary rocks of the Belt Supergroup and granitic rocks of the Cretaceous Idaho Batholith, which is intruded by Tertiary rhyolites and dacitic dikes. Hydrothermal alteration is spatially associated with the OSZ consisting of: silicification, sericitization, and chloritization. Different types of mineral systems occur in the OSZ and along sympathetic structures in the area, most likely of Cretaceous or Tertiary ages. Mineralization may include disseminated bulk-mineable precious metal mineralization associated with sheeted or stockwork veins, hydraulic breccias and with extensive widespread alteration; but high-grade gold also occurs within discreet structurally controlled quartz veins and silicified zones.

The Baner Project is located 8 kilometers southwest of Elk City, Idaho, in the heart of the historical Orogrande-Elk City Mining District. Elk City is an historic gold mining region dating back to the 1860s that once supported more than 20 underground mines and extensive placer operations. During the 1930s there were three cyanide mills along the Crooked River processing open pit and underground sulfide ore. Exploration in the district was conducted by Cyprus Amax, Kinross Gold, and Bema during the 1980s and 1990s. Premium Exploration conducted extensive soil sampling, airborne and surface geophysics, and drilling during the period around 2010. In 2020, Endomines AB brought the Friday Gold Project into production based on a reported measured plus indicated resource of 462,000 tonnes grading 6.54 g/t gold and mined 6,600 tonnes of ore with a 3.52 g/t head grade (Endomines AB Annual Reports for 2019, 2020). The Friday Gold Project is located within the OSZ approximately 8 kilometres south of the Baner Project.

Idaho Champion is a discovery-focused gold exploration company that is committed to advancing its 100% owned highly prospective mineral properties located in Idaho, United States. The Company's shares trade on the CSE under the trading symbol "ITKO" and on the OTCQB under the trading symbol "GLDRF". Idaho Champion is vested in Idaho with the Baner Project in Idaho County, the Champagne Project located in Butte County near Arco, and four cobalt properties in Lemhi County in the Idaho Cobalt Belt. Idaho Champion strives to be a responsible environmental steward, stakeholder and a contributing citizen to the local communities where it operates. Idaho Champion takes its social license seriously, employing local community members and service providers at its operations whenever possible.