WHITE ROCK, BC / ACCESSWIRE / March 3, 2021 / TDG Gold Corp (TSXV:TDG) (the "Company" or "TDG") is pleased to present the results of its quantitative risk assessment of the exploration target at its Shasta Project in the Toodoggone region of northern British Columbia, Canada, using available historical data. Results range from 0.9 million ounces ("Moz") gold equivalent ("AuEq"*) contained in 18.717 million tonnes ("Mt") at 1.5 grams per tonne ("gpt") using a 0.3 gpt cut off grade ("cog") to 1.47 Moz AuEq contained in 50.7 Mt at 0.9 gpt using a 0.1 gpt cog.

The exploration target presented in this press release is conceptual in nature and supported only by historical geological data, since the Shasta Project requires further drilling and surface sampling. It is not a NI 43-101 compliant resource. There is no certainty that the future resource estimates for the project will achieve the exploration targets reported in Table 1.

The process of assessing the exploration target for the Shasta Project uses a quantitative approach that has integrated available historical drill hole, geological and geochemical data to produce a series of equally likely scenarios that establish distributions for tonnage, grade, and metal content. Tonnage has been determined by modelling available data from the Creek, Shasta, JM, Cayley, and Rainier Zones, creating grade shells at a 0.1 gpt (see Figure 1) and 0.3 gpt AuEq cog, and then using statistically averaged gold equivalent grades within those shells. Tonnage calculated does not include the O, North or Jock Zones for which historical drilling information exists but further work is required before these zones can be included. 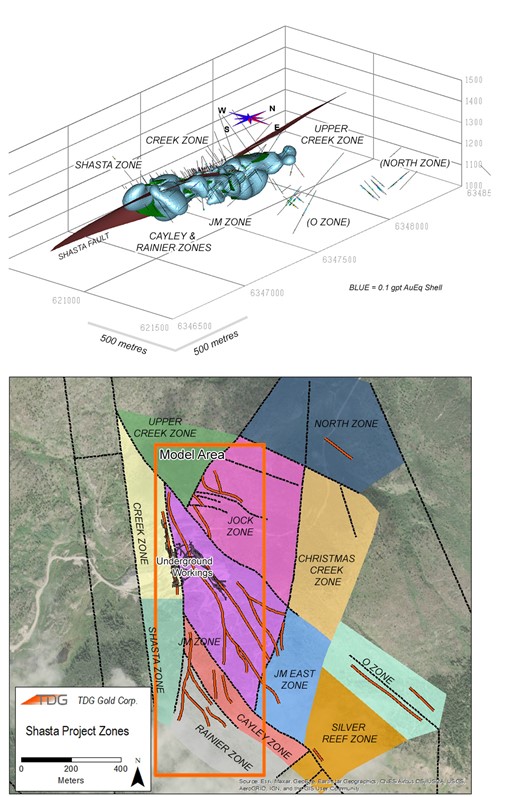 These ranges are conceptual in nature since the Shasta Project requires further drilling and surface sampling to validate the geological and statistical assumptions used. Although all the technical assumptions are supported by the available historical geological data, further drilling may challenge these assumptions. Therefore, there is no certainty that any future resource estimates for the project will achieve the exploration target reported in Table 1.

TDG believes that the exploration target is sufficient to justify undertaking additional exploration activities to confirm the assumptions used in the Exploration Target and advance the Shasta Project towards an NI 43-101 compliant inaugural resource calculation, which would be based on CIM definitions.

The gold mineralization at the Shasta Project is contained along two primary structures - the Shasta and JM Faults which hosts gold and silver bearing ore within stockwork, breccia and gouge zones. Current modelling shows this system to be 1.5 kilometres long by 800 metres wide at its southern end and open along strike and at depth. Recent grades from samples collected in situ from mineralized pillars in the Shasta mine assayed up to 10.40 gpt gold and 782 gpt silver (see news release 23rd February 2021). Historical mining efforts at the Shasta Project focused on the high-grade breccia zones only, leaving a halo of lower-grade mineralization in the ground.

Assessment of the exploration target uses two mineralized shells created using Leapfrog software and based off historical drill assays, the first being a 0.1 gpt cog and the second a 0.3 gpt cog, containing 50.700 and 18.717 Mt of rock respectively. The median and average grades were then calculated from historical drill holes within those shells to produce the final family of exploration target results. A density of 2.6 g/cm3 was used in the calculations and is based off average values from samples collected in 2020.

The technical content of this news release has been reviewed and approved Andy Randell, PGeo., a qualified person as defined by National Instrument 43-101.

TDG is a major mineral claim holder in the Toodoggone District of northern British Columbia, Canada, with over 23,000 hectares of brownfield and greenfield exploration opportunities under direct ownership or earn-in agreement. TDG's key projects are the former producing, high-grade gold and silver Shasta and Baker Mines which are both road accessible, produced intermittently between 1979-2012, and have over 50,000 meters of historical drilling. In 2021, TDG proposes to advance the projects through compilation of historical data, new geological mapping, geochemical and geophysical surveys, and drill testing of the known mineralization occurrences and their extensions. TDG currently has 57,335,335 common shares issued and outstanding.