The following table shows the results for the comparable periods: 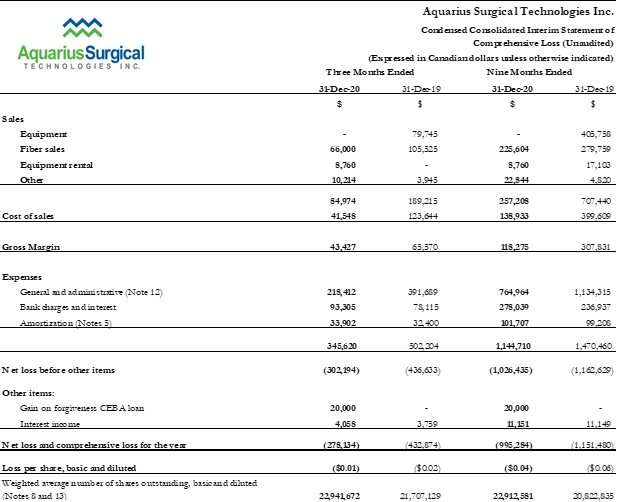 General and administrative expenses in the period ended December 31, 2020 were $764,964 compared to $1,134,315 in the prior period. Included in the current year's expenses is a provision of $100,000 for possible inventory shortages and costs associated with an internal audit as discussed in Note 19 - Subsequent Events in the Interim Financial Statements.

The Corporation also recorded a $20,000 Gain on forgiveness of the CEBA loan in the current year. There was no such amount in the prior year.

Subsequent to the end of the Period covered by the Financial Statements it was discovered that Gordon Willox, the (now former) President and Chief Technology Officer of Surgical Lasers Inc. ("SLI"), the principal operating subsidiary of the Corporation, together with a number of other (now former) employees and consultants/agents, had set up two new corporations, one in Canada and one in the USA, with the confusingly similar name of "Surgical Lasers Solutions Corp." ("SLSC") and have been operating in a competitive business to that of SLI, whilst using the facilities of and operating from SLI's office and at SLI's expense. Further, it was found that SLSC had taken two lasers from SLI's Inventory, sold them to a customer in the United States and collected US$73,000. While steps are being taken towards recovery of those funds, the third party customer is unwilling to pay SLI US$73,000 unless and until SLSC has repaid the US$73,000 that it received from the customer. Additionally, it is apparent that other inventory and/or equipment belonging to SLI has been misappropriated by Mr. Willox/SLSC and sold. A full investigation is under way with a view to recovery of all and any property misappropriated and amounts due.

When the foregoing facts came to light, Mr. Willox was removed as a director and officer of SLI effective February 22, 2021, and steps are in process for his removal as a director of Aquarius Surgical Technologies.

In the Unaudited Interim Financial Statements, Management has made a provision of $100,000 to cover expenses and possible inventory shortages. The Corporation has also recovered $49,482 in unpaid management and consulting fees reported in prior periods and reduced these fees by $52,983 in the current reporting period. In light of the foregoing, and until a full investigation and audit of the misappropriation by Mr. Willox and his associates has been completed, Management cannot be certain that it has yet discovered the full extent of or made sufficient provision for losses caused. Further, there can be no assurance that any property that has been taken can be located and recovered, or that any Judgment that may be obtained against Mr. Willox or SLSC will be recoverable.

The Canadian Securities Exchange has neither approved nor disapproved of the information contained in this release. This Media Release may contain forward-looking statements, which reflect the Corporation's current expectations regarding future events. The forward-looking statements involve risks and uncertainties. Actual events could differ from those projected herein and depend on a number of factors including the success of the Corporation's sales strategies.