TORONTO, ON / ACCESSWIRE / February 25, 2021 / Chilean Metals Inc. ("Chilean Metals," "CMX" or the "Company") (TSXV:CMX)(SSE:CMX)(MILA:CMX) s pleased to announce it has received TSXV conditional approval on its announced agreement to acquire 80% of the NISK property via a series of option payments and work commitments as further detailed below.

Critical Elements Lithium Corp. ("Critical Elements") (CRE)(CRECF)(F12) has granted to Chilean Metals, as the "Optionee", the exclusive right and option to acquire, on or before the date that is three (3) years from the TSX.V approval (the "Effective Date") (the "First Option Period"), an initial 50% Earned Interest in the Property (the "First Option"), free and clear of all Encumbrances other than the Permitted Encumbrances and the Royalty, subject to the terms and conditions in this Agreement.

Requirements to Exercise the First Option

In order to acquire the 50% Earned Interest under the First Option, the Optionee must:

Subject to the Optionee having exercised the First Option, Critical Elements also grants to the Optionee the exclusive right and option (the "Second Option") to increase its Earned Interest in and to the Property from 50% to 80% by incurring or funding additional Work Expenditures for an amount of $2,200,000, including the delivery of a Resource Estimate, for a period commencing on the delivery of the First Option Exercise Notice and ending on the date that is four (4) years from Effective Date (the "Second Option Period").

In the event, Chilean Metals exercises the First Option and subsequently elects not to exercise the Second Option, or in the event, the Second Option is terminated, whichever the case, Chilean Metal's right to act as Operator shall immediately terminate and Critical Elements shall become the Operator for the future conduct of Work Expenditures and Programs on the Property.

Following the exercise of the First Option by Chilean, and in addition to the obligations of Chilean under the First and Second Option, if applicable, Critical Elements shall receive, in the event of a Lithium discovery, a royalty equal to 2% net smelter returns (the "Royalty") resulting from the extraction and production of Lithium products, including Lithium ore, concentrate and chemical, resulting from the extraction and production activities on the Property, including transformation into chemical products. Chilean shall have the right at any time to purchase 50% of the Royalty and thereby reduce the Royalty to 1% by paying to Critical Elements a total cash amount of $2,000,000.

In the event of a Lithium discovery, Critical Elements will retain Lithium Marketing Rights meaning the exclusive right of Critical Elements to market and act as the selling agent for any and all Lithium products, including Lithium ore, concentrate, and chemical, resulting from the extraction and production activities on the Property, including transformation into chemical products.

A Finders Fee of 734,166 shares will be paid to Paradox Equity Partners Ltd with 668,377 shares issued on closing and a further 65,789 will be issued 6 months from the closing date. Both share issuances come with the usual securities law four-month and one-day hold period from the date of issuance.

"We are excited to close on NISK. The more we look at its potential the more excited we become. Getting a resource that could credibly lead to a mine is the single biggest challenge in junior mining. With NISK we believe we have such an opportunity and we look forward to getting to work on it ASAP. Fundamentally we will be developing a comprehensive 3D Deposit model and then design the initial exploration program that we would expect to launch early in Q2"

The deposit is open in all directions and there are several MAG anomalies similar to the ones drilled to create the initial resource that has been yet untested. We believe growing this resource to make it a viable mine project is well within reason. We look at the great work Talon Metals has done on its Tamarack project and believe we have a very similar project albeit with lower Nickel grades and higher PGE on the NISK," commented Terry Lynch Chilean CEO.

About the NISK Property

The NISK property lies approximately 284 km by road north of the mining town of Chibougamau and 45 km east of the Nemiscau airport, in the James Bay territory of Quebec. 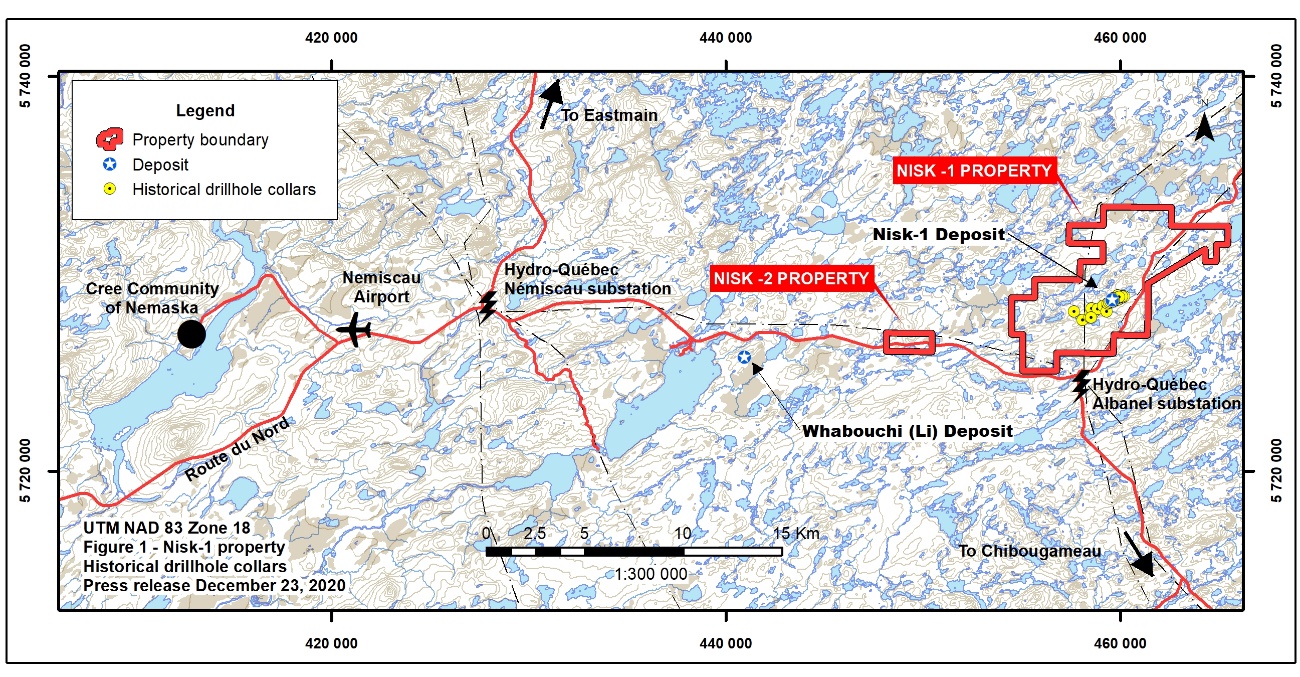 Figure 1 - NISK Property location, near the community of Nemaska, north of Chibougamau, Quebec.

As a result of the James Bay hydroelectric development work by Hydro-Quebec, the Nemiscau area now has excellent infrastructure.

The Property is dominantly covered with Boreal forest, with a gentle topography of rolling hills and numerous small lakes, swamps, and a local network of stream drainages. The property is accessible by variably maintained 4x4 trails and is amenable to both winter and summer exploration and drilling.

The NISK property is located within the late Archean-age Superior Province and is characterized by a belt of paragneisses interbedded with amphibolites, known as the Bande du Lac des Montagnes (BLM). The BLM is part of a NE-orientated overturned syncline with moderately to steeply dipping limbs, which features as a prominent regional magnetic conductor (see Figure 3). 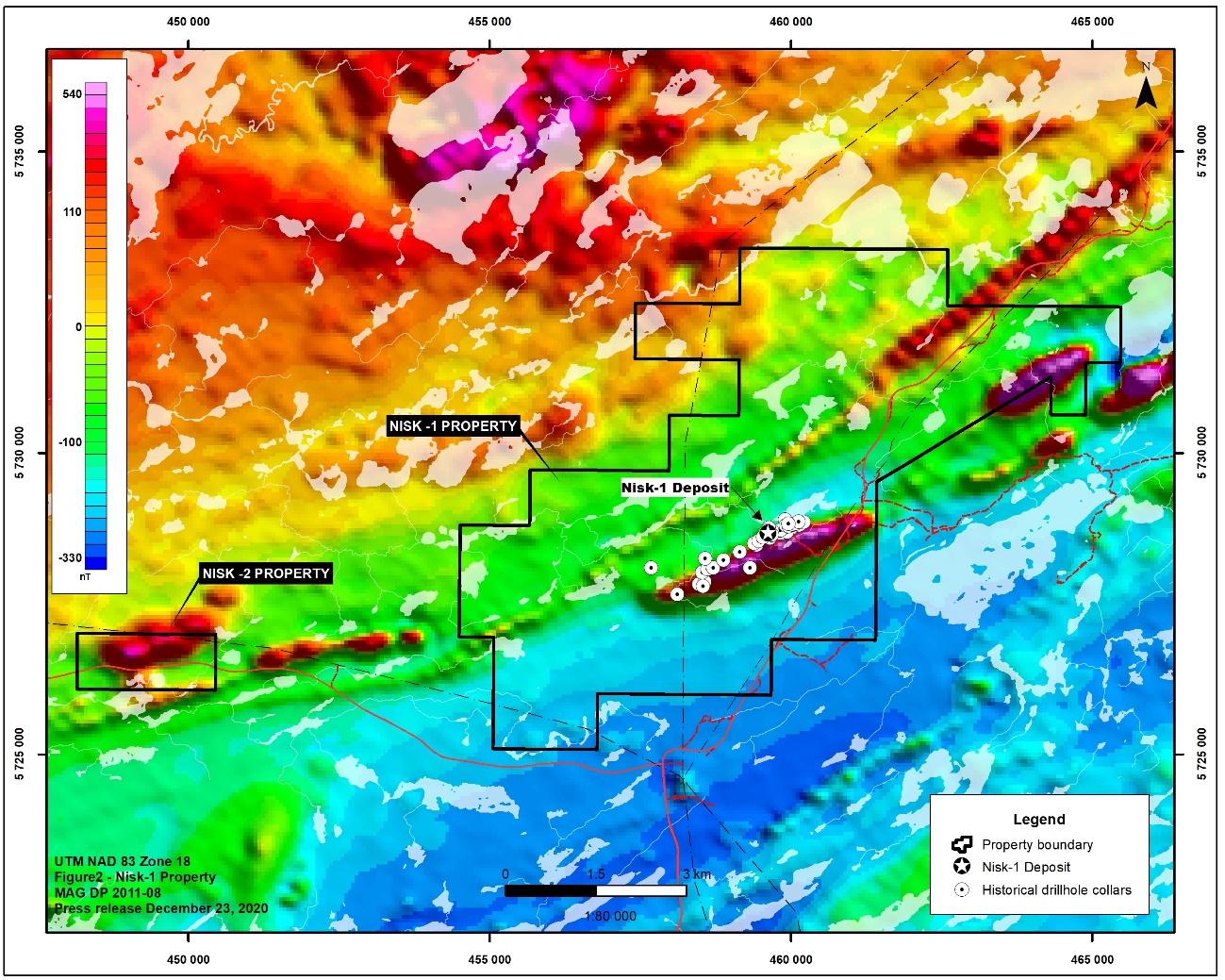 The NISK-1 property hosts a nickel showing discovered and evaluated by INCO and its subsidiary, Nemiscau Mines, in the period from 1962 to 1969. At the time, the Nemiscau area was very remote and INCO had large quantities of high-grade nickel ore in the Sudbury area, so the property was abandoned.

The 63 holes drilled by Golden Goose Resources were utilized to develop a NI 43-101 mineral resource. The resource estimation was completed by RSW INC. by Pierre Trudel Ph.D., P.Eng. and is detailed in their report entitled Resource Estimate for the NISK-1 Deposit, Lac Levac Property, Nemiscau, Québec. Dated "December 2009", the 2009 resource estimation is considered to be a "Historical Estimate" as defined by NATIONAL INSTRUMENT 43-101 STANDARDS OF DISCLOSURE FOR MINERAL PROJECTS.

The historical resource estimation culminated in the definition of Nickel, Copper, Cobalt, Palladium, Platinum resources, containing Measured, Indicated, and Inferred confidence categories as described in Table 1 below. The simplified sectional resource is developed along a single continuous drill hole intersections, developed with a cut-off grade of 0.4% Ni over a minimum width of 0.5 m, within estimation blocks measuring up to 75 m along respective sections to define the nickel-bearing zone.

The information regarding the NISK-1 deposit was derived from the technical report titled "Resource Estimate for the NISK-1 Deposit, Lac Levac Property, Nemiscau, Quebec" dated December 2009. The key assumptions, parameters and methods used to prepare the mineral resource estimates described above are set out in the technical report.

The Company plans to further advance the previously defined historic resources with confirmation drilling, additional infill, and resource definition drilling. An updated resource estimate will be prepared upon completion of the additional drilling. Surface exploration is also contemplated of other prospective targets on the property.

Finally, the board of CMX has granted to Directors, Officers, Employees and Consultants of the Company stock options for 5,250,000 options under the CMX option plan. The options are exercisable for five years and the exercise price set for the options was $0.31.

Chilean Metals Inc is 100% owner of five properties comprising over 50,000 acres strategically located in the prolific IOCG ("Iron oxide-copper-gold") belt of northern Chile. It also owns a 3% NSR royalty interest on any future production from the Copaquire Cu-Mo deposit, recently sold to a subsidiary of Teck Resources Inc. ("Teck"). Under the terms of the sale agreement, Teck has the right to acquire one third of the 3% NSR for $3 million dollars at any time. The Copaquire property borders Teck's producing Quebrada Blanca copper mine in Chile's First Region.

Chilean Metals has acquired the Golden Ivan project in the heart of the Golden Triangle. https://chileanmetals.com/press-releases/ The Golden Triangle has reported mineral resources (past production and current resources) in total of 67 million oz of gold, 569 million oz of silver and 27 billion pounds of copper. This property hosts two (2) known mineral showings (Gold Ore, and Magee), and a portion of the past producing Silverado Mine, which was reportedly exploited between 1921 and 1939. These mineral showings are described to be Polymetallic veins that contain quantities of Silver, Lead, Zinc +/- Gold +/- Copper.

ON BEHALF OF THE BOARD OF DIRECTORS OF