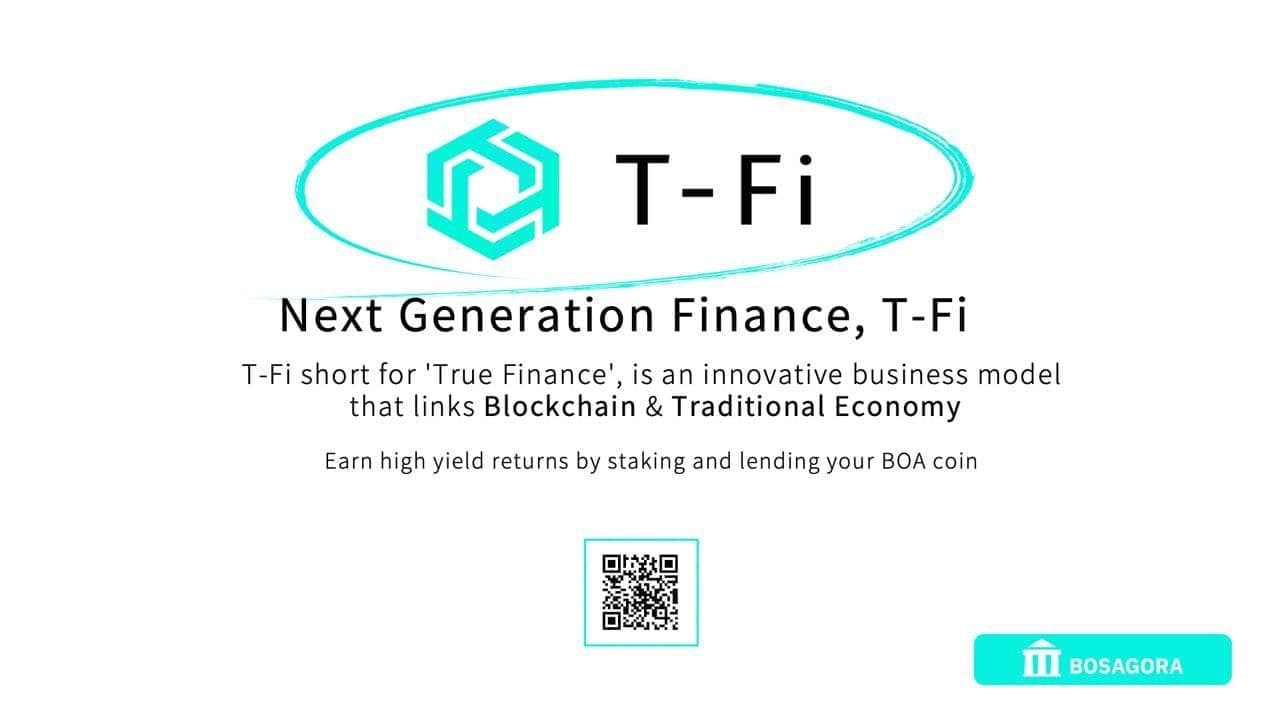 Implying the 'true finance', T-Fi will present a new financial experience by connecting real economies such as securities and real estate with BOA, a coin of BOSAGORA. It also announced the roadmap that it will initiate a pilot operation on small scale in March and complete the decentralized finance (DeFi) on an incremental basis within this year when a trust contract with the Mainnet is concluded.

According to BOSAGORA Foundation, T-Fi is an economic ecosystem that can create profits in a variety of ways. Profit creation means include the reward for block generation by operating nodes of BOA; fixed interest from the lending of staked BOA assets; and income dividend to be paid by taking part in security token offering (STO) projects that are exclusively partnered with BOSAGORA. T-Fi attracts attention from the market as it can generate profits by lending crypto assets already staked in the real economy, in addition to earnings gained through the operation of nodes and STOs that are well-known existing ways of creating value.

For the management of the T-Fi ecosystem, BOSAGORA plans to establish 'T-Fi Labs' as a separate corporation to operate nodes in its place by trusting BOA coins, while carrying out various businesses such as the lending of BOA assets, investment in the real economy, and payment of fixed interest. It will also operate an exchange where users can freely buy and sell 'lending-voucher tokens' among themselves when they are provided at lending.

The company said that T-Fi pursues more stabilized and higher profits by complementing vulnerabilities of existing DeFis. Whereas conventional DeFis are focused on lending and transaction of erc tokens, T-Fi can make investments in various real economies. Besides, due to its profit system based on the verified real economy, T-Fi has such a structure that is fundamentally impossible to manipulate by certain power by taking advantage of bugs, smart contracts and blind spots in profit mechanism. Another advantage of T-Fi over DeFis with complex structure is the fact that it can lure universal participation as it is based on the profit system of a real economy that is familiar to all.

Out of all the Traditional economy sector, T-Fi is centre-staging the stock industry. It plans to operate lent assets through FMway, which signed a business agreement with BOSAGORA in November last year. FMway is an investment company with a big data-based stock-picking algorithm and has recorded annual average earnings of 39.7% as a result of back data testing for the past 20 years on 12 countries' stock markets.

To decentralize T-Fi, a financial model that makes investment in the real economy including stocks, to record in blocks the various transaction details that occur outside blockchain of BOSAGORA through objective verification. To that end, BOSAGORA Foundation is known to have started the discussion with Chainlink, the world-class blockchain middleware company specialized in on-chainization of off-chain data, for integrating system through Oracle.

T-Fi Labs plans to launch lending products with 1-year maturity on a pilot basis during the first half of this year, and it will officially start service for operating nodes as an agency in the latter half when BOSAGORA nodes can be operated. In the first year of operating Coinnet, BOSAGORA is required to issue and provide BOA coins to node operator as a reward for block generation representing 37.84% of total issued coins. This is a much higher rate compared to other equivalent PoS-family projects.

"With the vision of building a better world, BOSAGORA is happy to provide safer and more convenient financial service via T-Fi," said Kim In-hwan, Chairman of BOSAGORA Foundation. "BOSAGORA will create a financial ecosystem that is transparent, fair and beneficial for all through T-Fi."

Meanwhile, T-Fi Labs will start on February 22 to receive participants in the initial pilot operation of T-Fi lending at its website and will pay fixed interest rate of approximately 27% for lending for one year.