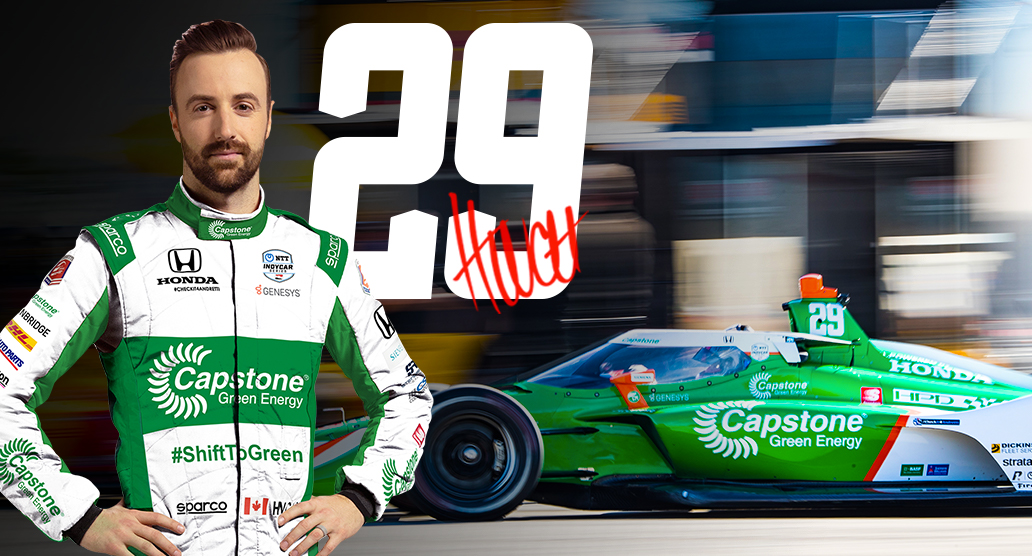 Capstone tapped one of the most popular INDYCAR drivers in Andretti Autosport's, James Hinchcliffe. The self-proclaimed Mayor of "Hinchtown" finished second on Season 23 of "Dancing with the Stars" along with partner Sharna Burgess. His eight-week run on the Emmy-award winning show landed him appearances on "Ellen," "Good Morning America," "Entertainment Tonight," "Access Hollywood" and "The View." James has a microbrew beer named for him: Hinchtown Hammer Down, brewed by Flat12 Bierwerks in Indianapolis. In addition, he worked as a broadcast analyst for the INDYCAR Radio Network, Champ Car and A1GP Network, and he hosts a podcast with friend and fellow Andretti Autosport driver Alexander Rossi called "Off Track with Hinch and Rossi."

The Capstone green and white livery first appeared on the sidepods of Colton Herta's No. 88 Honda in 2019 on the streets of Toronto and continued through to the season finale race where Herta scored a victory from pole position for the then Harding Steinbrenner Racing team. In 2020, the Herta sponsorship extended the relationship between Andretti Autosport and Capstone Turbine, which began at Texas Motor Speedway during the month of June in 2019 with driver Alexander Rossi who was the first INDYCAR driver to put a Capstone Turbine INDYCAR on a podium with a second-place finish.

"We are looking forward to continuing to expand the winning relationship with Capstone Turbine and helping them grow green energy brand awareness by assisting them with new B2B introductions and expanding current relationships with other sponsors that are Capstone end users," stated Michael Andretti, Chief Executive Officer and Chairman of Andretti Autosport.

"We are very happy to continue our partnership with Capstone," said George Steinbrenner, Team Principal for Andretti Steinbrenner Autosport. "It has been a great journey taking this partnership from a single race sponsorship in 2019 to a strong and sustainable pact. Working with Capstone has opened our team to a world of green energy initiatives that we continue to seek to bring to the INDYCAR paddock."

"The Mayor of Hinchtown will now add the Grand Marshal of Capstone World to his resume. When he is not driving at 240 miles per hour on an INDYCAR circuit, James will be helping Capstone educate fans on the types of alternative energy sources that are accelerating the global shift to green energy," stated Darren Jamison, Capstone's President and Chief Executive Officer. "The energy landscape is changing, and we are excited to have James both behind the wheel and as our brand ambassador," added Mr. Jamison.

"The valuable business relationships we have developed with the support of George Steinbrenner IV and Michael Andretti offers Capstone a platform to reach the racing community and help more companies save money and lower their carbon footprint," concluded Mr. Jamison.

For customers with limited capital or short-term needs, Capstone offers rental systems; for more information, contact: [email protected]. To date, Capstone has shipped nearly 10,000 units to 83 countries and in FY20, saved customers an estimated $219 million in annual energy costs and 368,000 tons of carbon.

Under the banners of Andretti Autosport and BMWi Andretti Motorsport, the Indianapolis-based team fields multiple entries across the IndyCar Series, Indy Lights, the FIA Formula E Championship and the IMSA Prototype LMP3 Division. The team also competes as Walkinshaw Andretti United in the Australian Supercars category through partnership with Walkinshaw Racing and United Autosports and additionally is set to field an entry in the new Extreme E championship via Andretti United Extreme E.

To share in the Andretti story, please visit online at AndrettiAutosport.com and follow on social media with #AllAndretti.

This release contains forward-looking statements as defined in the Private Securities Litigation Reform Act of 1995, including statements regarding expectations, beliefs, plans, intentions, and strategies of the Company. The Company has tried to identify these forward-looking statements by using words such as "expect," "anticipate," "believe," "could," "should," "estimate," "intend," "may," "will," "plan," "goal" and similar terms and phrases, but such words, terms and phrases are not the exclusive means of identifying such statements. Actual results, performance and achievements could differ materially from those expressed in, or implied by, these forward-looking statements due to a variety of risks, uncertainties and other factors, including, but not limited to, the following: the ongoing effects of the COVID-19 pandemic; the availability of credit and compliance with the agreements governing the Company's indebtedness; the Company's ability to develop new products and enhance existing products; intense competition; financial performance of the oil and natural gas industry and other general business, industry and economic conditions; the Company's ability to adequately protect its intellectual property rights; and the impact of pending or threatened litigation. For a detailed discussion of factors that could affect the Company's future operating results, please see the Company's filings with the Securities and Exchange Commission, including the disclosures under "Risk Factors" in those filings. Except as expressly required by the federal securities laws, the Company undertakes no obligation to update or revise any forward-looking statements, whether as a result of new information, changed circumstances or future events or for any other reason.

"Capstone" and "Capstone Microturbine" are registered trademarks of Capstone Turbine Corporation. All other trademarks mentioned are the property of their respective owners.