TORONTO, ON / ACCESSWIRE / February 16, 2021 / Galway Metals Inc. (TSXV:GWM) (the "Company" or "Galway") is pleased to report new drill results from holes in the western and northern extensions of the George Murphy Zone (GMZ) at the Clarence Stream Gold Project in SW New Brunswick (Figure 1, Figure 2, and Figure 3).

Veins to the north of the GMZ (first reported on February 13, 2020) are suddenly suggesting wide, high-grade content with the intersections of 20.2 g/t Au over 7.0m within a broader structure that assayed 4.8 g/t Au over 34.0m, plus 1.3 g/t Au over 9.5m in hole CL-50. Hole CL-84, drilled 35m to the east of hole CL-50, intersected significant visible gold (VG) (see Photos); assays are pending. The GMZ remains open for expansion in all directions; all zones at Clarence Stream remain open for expansion in all directions.

"Galway is really pleased with how all zones are expanding with nice widths and grades. The Company is following up on these and other results ahead of the release this summer of the Clarence Stream mineral resource update. With 6 rigs turning, and with a 7th on the way, Galway can complete in 6-months what took 3-years when we had just 1 rig at Clarence Stream. A similar situation exists at Estrades where Galway is drilling with 3 rigs vs just 1 in all previous programs. With 9 rigs currently turning, and a 10th on the way, Galway will be making a lot of news," cites Robert Hinchcliffe, President and CEO of Galway Metals.

The GMZ, Richard and Jubilee are Part of the Same 2.5 km Long System
Galway's George Murphy Zone discovery was initially reported in December 2017, but drilling stopped a year later following the discovery of the Richard Zone, which was first reported in January 2019. Drilling at the GMZ resumed a year later in mid-November 2019. The plunge of all zones to date in the Jubilee, Richard, and GMZ are thought to be to the west and are part of the same 2.5 km long system. The GMZ is 765m long to date, with multiple structures over 310m wide, and with all zones open in every direction.

The GMZ, Jubilee, Adrian, and Richard Zones have been discovered (or drilled) by Galway after the last resource estimate was released in September 2017. The discovery of these zones, and their subsequent expansions, demonstrate that Clarence Stream is an emerging new gold district in North America.

VG = visible gold. 0.42 g/t Au was used for the bottom cut-off; True widths are unknown if not noted; all VG samples are done with metallic screen assays

Geology and Mineralization
The discovery of the Richard Zone in hole 12 contains elevated levels of bismuth, arsenopyrite, and antimony, in multiple quartz veins, with tungsten in the vicinity. This is similar to other Clarence Stream deposits, which can be characterized as intrusion-related quartz-vein hosted gold deposits. Richard Zone contains multiple zones of quartz veining with sulfides and sericite alteration. In general, mineralization at Clarence Stream consists of 10-70% quartz stockworks and veins with 1-5% fine pyrite plus pyrrhotite plus arsenopyrite plus stibnite in sericite altered sediments. The Jubilee mineralization consists of 2%-5% disseminated pyrite, sphalerite, galena, arsenopyrite, chalcopyrite, and pyrrhotite in sediments with white to smoky grey quartz veining. Locally there is up to 10% sphalerite and semi-massive galena veinlets. The 2.5 km trend that hosts the GMZ, Richard and Jubilee Zones contains a mineralized mafic intrusive locally - similar to the South Zone, which currently hosts most of the property's last reported gold resources (September 2017). A more complete description of Clarence Stream's geology and mineralization can be found at www.galwaymetalsinc.com.

Review by Qualified Person, Quality Control and Reports
Michael Sutton, P.Geo., Director and VP of Exploration for Galway Metals, is the Qualified Person who supervised the preparation of the scientific and technical disclosure in this news release on behalf of Galway Metals Inc. All core, chip/boulder samples, and soil samples are assayed by Activation Laboratories, 41 Bittern Street, Ancaster, Ontario, Canada, who have ISO/IEC 17025 accreditation. All core is under watch from the drill site to the core processing facility. All samples are assayed for gold by Fire Assay, with gravimetric finish, and other elements assayed using ICP. The Company's QA/QC program includes the regular insertion of blanks and standards into the sample shipments, as well as instructions for duplication. Standards, blanks and duplicates are inserted at one per 20 samples. Approximately five percent (5%) of the pulps and rejects are sent for check assaying at a second lab with the results averaged and intersections updated when received. Core recovery in the mineralized zones has averaged 99%.

For results of all holes that Galway has drilled at Clarence Stream, go to Galway's website at www.galwaymetalsinc.com. 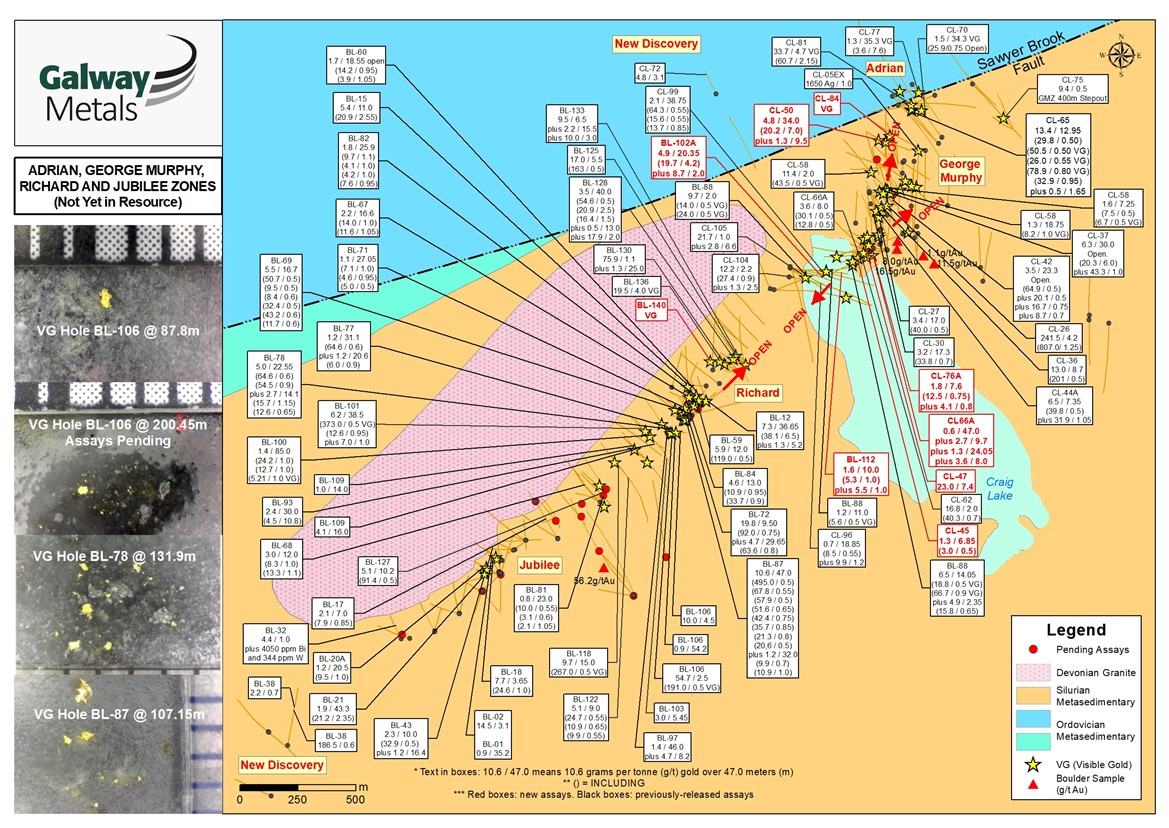 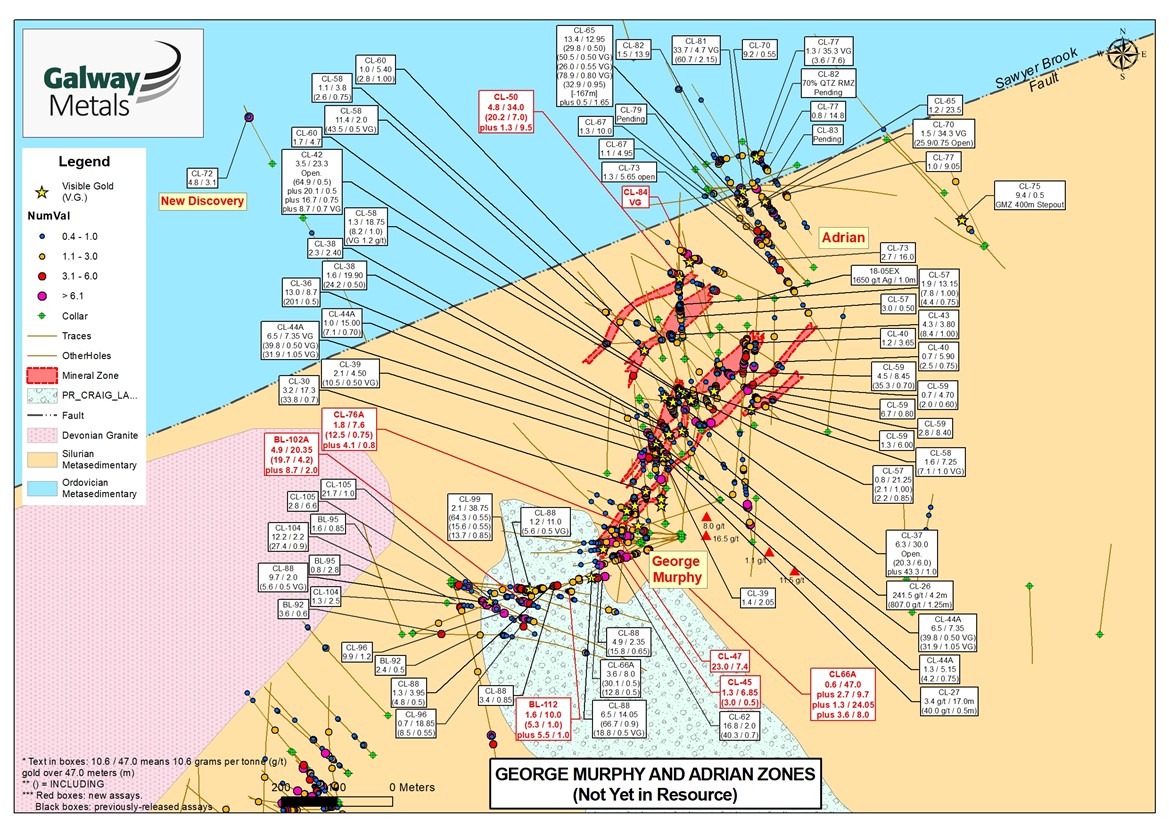 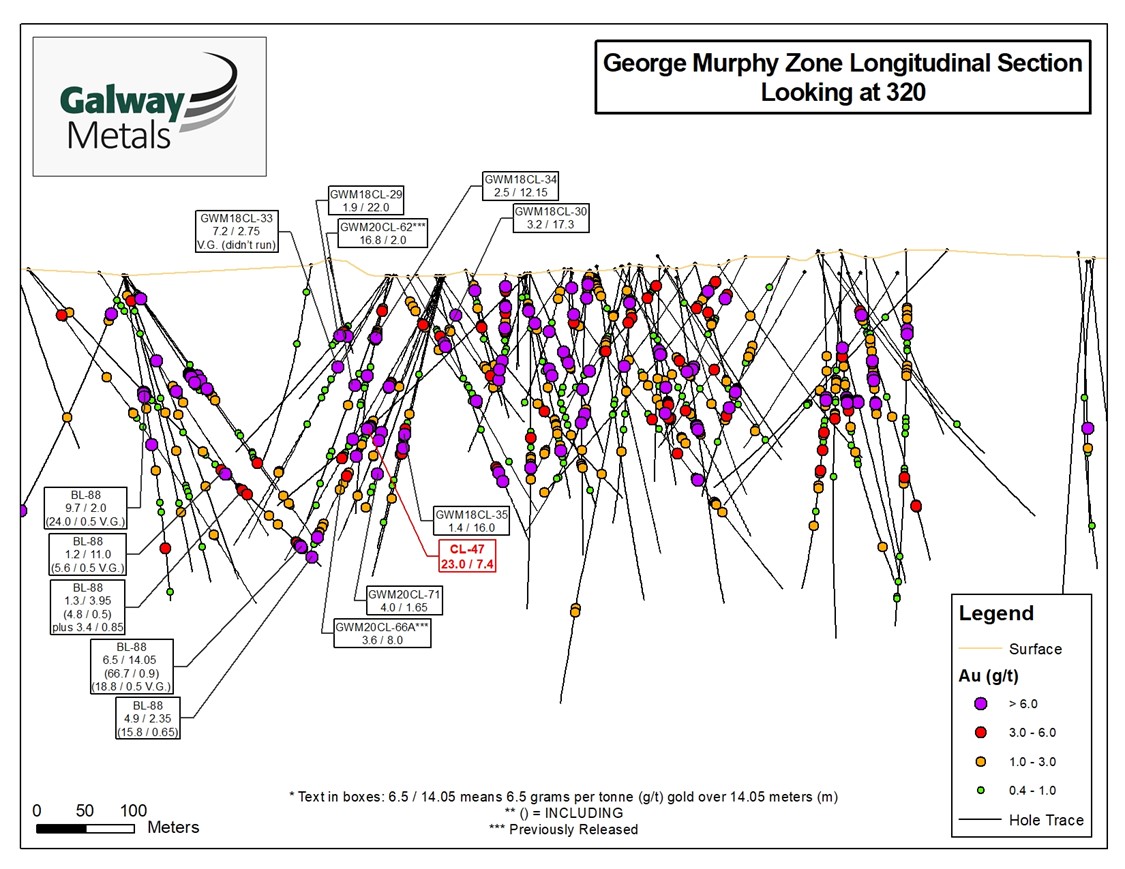 About the Company
Galway Metals is well capitalized with two gold projects in Canada, Clarence Stream, an emerging gold district in New Brunswick, and Estrades, the former producing, high-grade VMS mine in Quebec. The Company began trading on January 4, 2013, after the successful spinout to existing shareholders from Galway Resources following the completion of the US$340 million sale of that company. With substantially the same management team and Board of Directors, Galway Metals is keenly intent on creating similar value as it had with Galway Resources.

CAUTIONARY STATEMENT
Neither the TSX Venture Exchange nor its Regulation Services Provider (as that term is defined in the policies of the TSX Venture Exchange) accepts responsibility for the adequacy of this news release. No stock exchange, securities commission or other regulatory authority has approved or disapproved the information contained herein.