TORONTO, ON / ACCESSWIRE / February 17, 2021 / Fury Gold Mines Limited (TSX:FURY)(NYSE American:FURY) ("Fury" or the "Company") is pleased to outline its 2021 exploration plans for the Committee Bay gold project located in the Kitikmeot region of Nunavut. The Company plans to drill between 5,000 metres (m) and 10,000m this summer, subject to COVID limitations, with the goal of: 1) drilling the underexplored Raven high-grade vein target, which sits along an 8 kilometre (km) shear zone that has the potential to turn into a significant discovery; 2) expanding the Three Bluffs deposit through the drilling of a major conductor down dip from a high-grade portion of the resource; and 3) advancing the previous geological work on targets along the Aiviq - Kalulik corridor to advance them to drill stage.

"Shareholders are uniquely positioned in Nunavut with the Committee Bay project, which is considered to be one of the largest unexplored greenstone belts remaining in North America. We will be initiating Fury's first drill program at the project with a robust initial resource, several mature high grade exploration targets and an experienced team with the skill sets to deliver on our growth plans," commented Mike Timmins, President and CEO of Fury.

The Raven prospect is located in the southwest third of the Committee Bay Gold Belt, approximately 80km west of the Three Bluffs deposit (Figure 1). The prospect is situated along an 8km long shear zone where defined gold mineralization occurs in quartz-arsenopyrite veins in highly sheared gabbros and mafic volcanic rocks over a strike length of approximately 1.2km (Figures 2 and 3). There have been 207 rock samples historically taken over the defined area of mineralization, with 30 samples returning values greater than 5 g/t gold with a peak value of 143 g/t gold. Importantly, only 1.2km of the 8km shear zone has been systematically explored to date.

The prospect has a total of nine historical drill holes totaling 1,670m with intercepts including 5.49m of 12.6 g/t gold, 2.84m of 31.1 g/t gold and 5.38m of 2.99 g/t gold over a drilled strike length of 400m. Historical drilling at the prospect has defined a high-grade body of mineralization approximately 250m in length, with a 30-degree plunge to the east that is open along strike and down dip (Figure 4). Fury plans to drill the Raven prospect through aggressive step outs to demonstrate the scale of the system and to explore the entire length of the 8km shear zone to define new targets through systematic till sampling and geological mapping.

"Our technical team views the high-grade veins at the Raven prospect as the highest probability for a major discovery on the belt this year as the historical drilling positions us for the ability to rapidly expand the body through aggressive step outs. In addition, we will continue to advance our high-priority geophysical targets through the critical step of mapping to define geometry as we advance these targets to drill stage," commented Michael Henrichsen, SVP, Exploration of Fury. 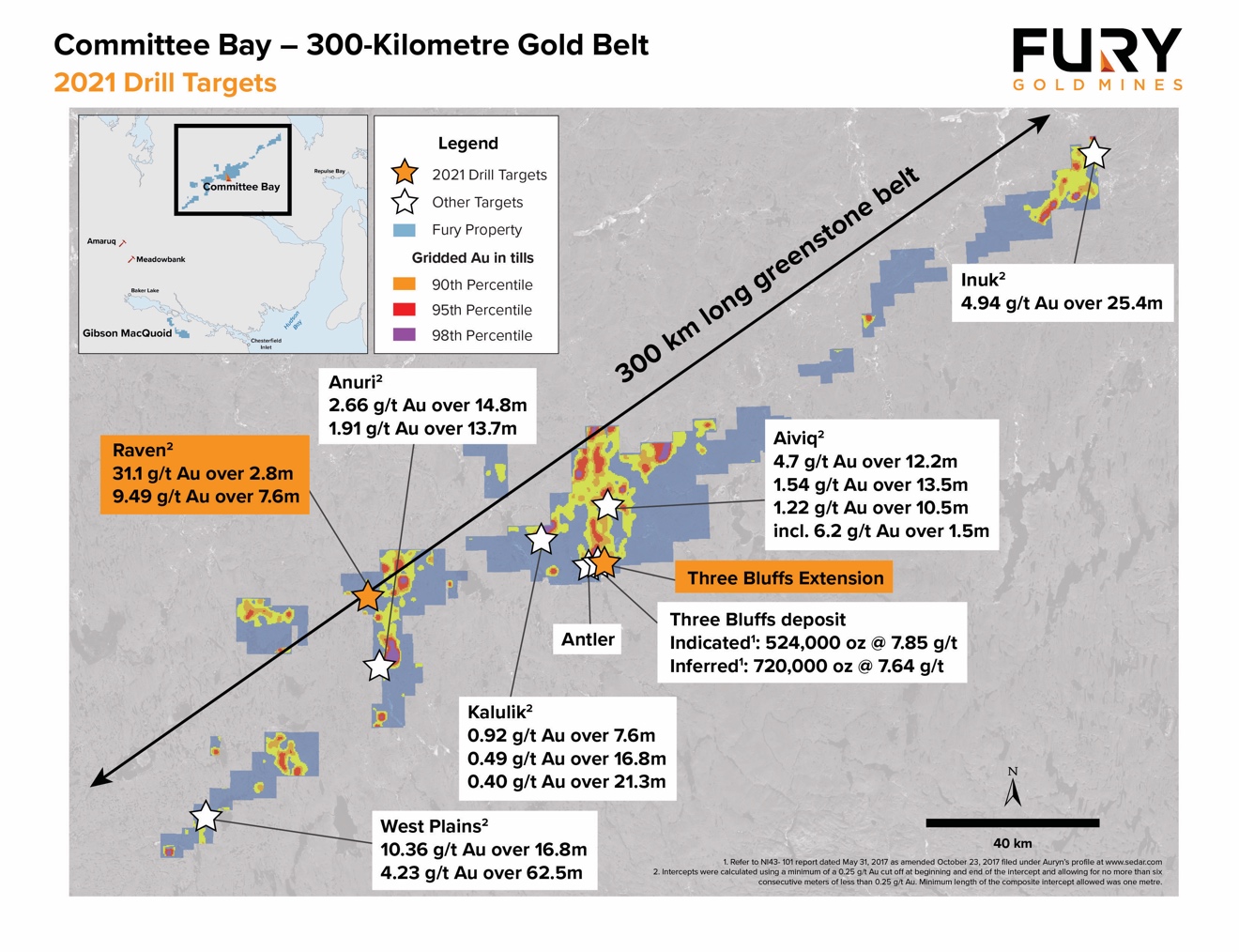 The Three Bluffs deposit contains a high-grade resource defined by 525,000 oz. at 7.85 g/t gold in the indicated category and 720,000 oz. at 7.64 g/t gold in the inferred[1] category. The deposit is characterized by gold mineralization hosted within a folded, silicified and sulphidized banded iron formation. The anticline that defines the deposit has a strike length of approximately 4km and has been drilled from 150m to 650m vertical depth and is open down dip (Figure 4). High-grade mineralization at the deposit is associated with high conductivity responses due to the intense sulphidation of the banded iron formation as evidenced in the hinge zone of the anticline (Figure 5). 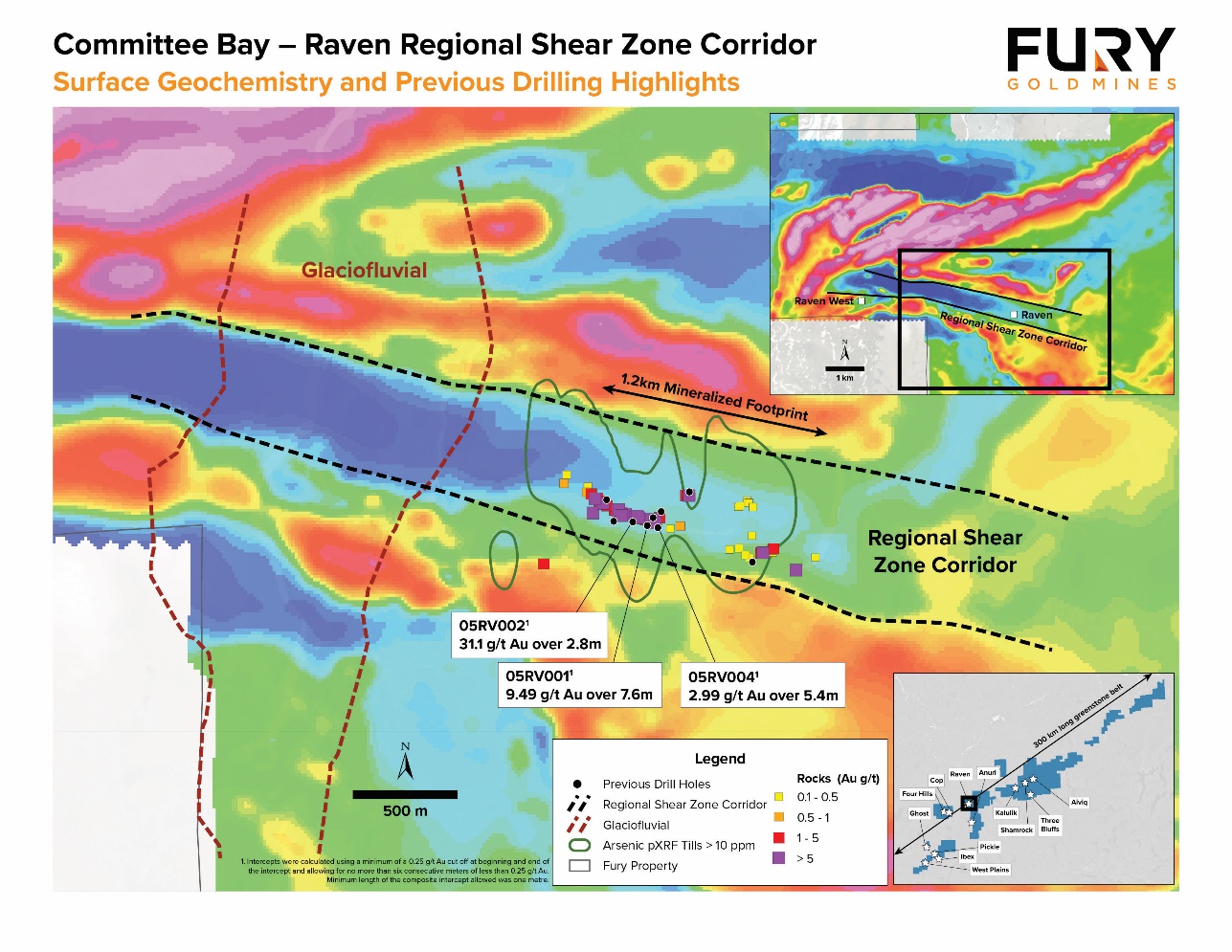 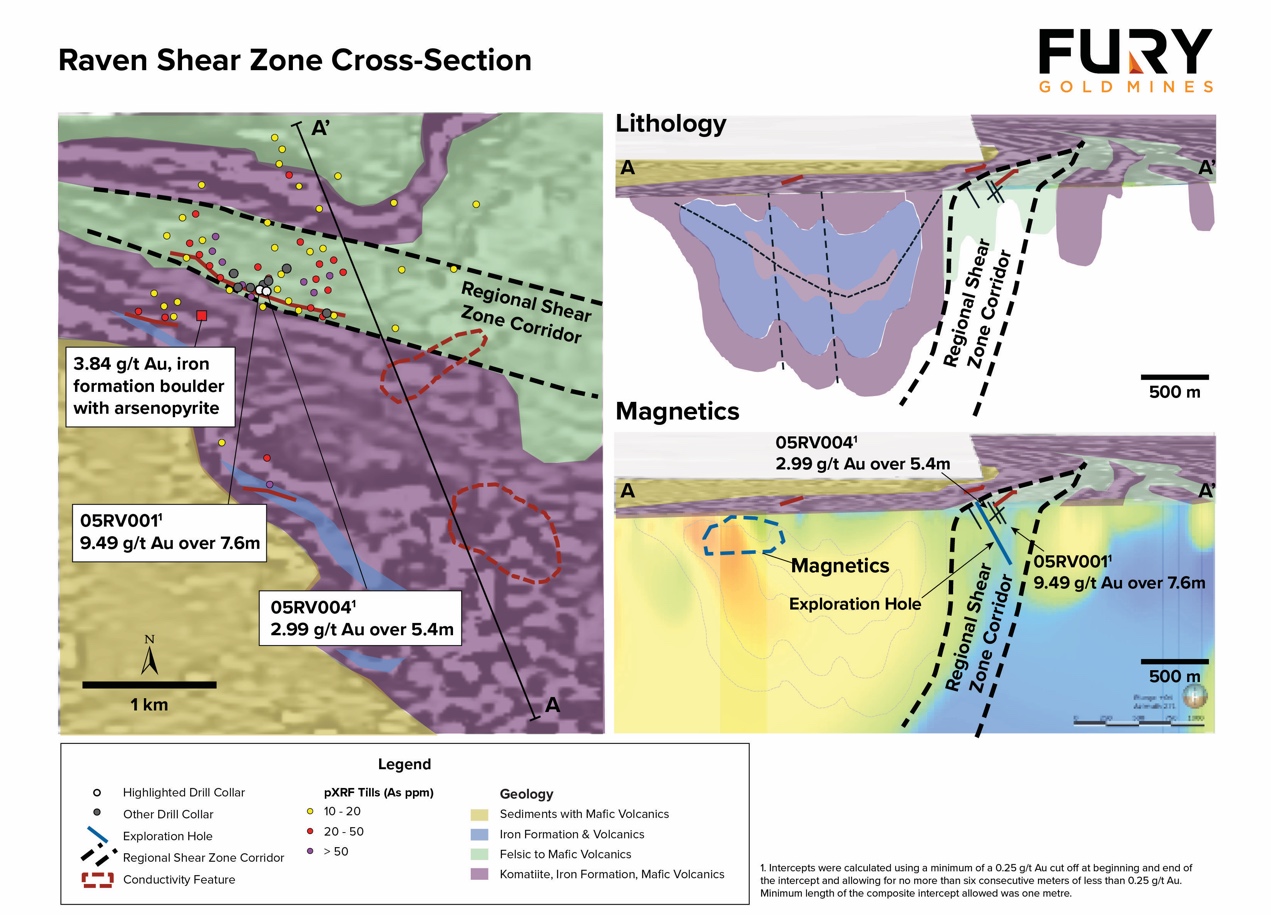 Figure 3: Illustrates the mineralized segment of the Raven shear zone in geologic and magnetic cross sections. 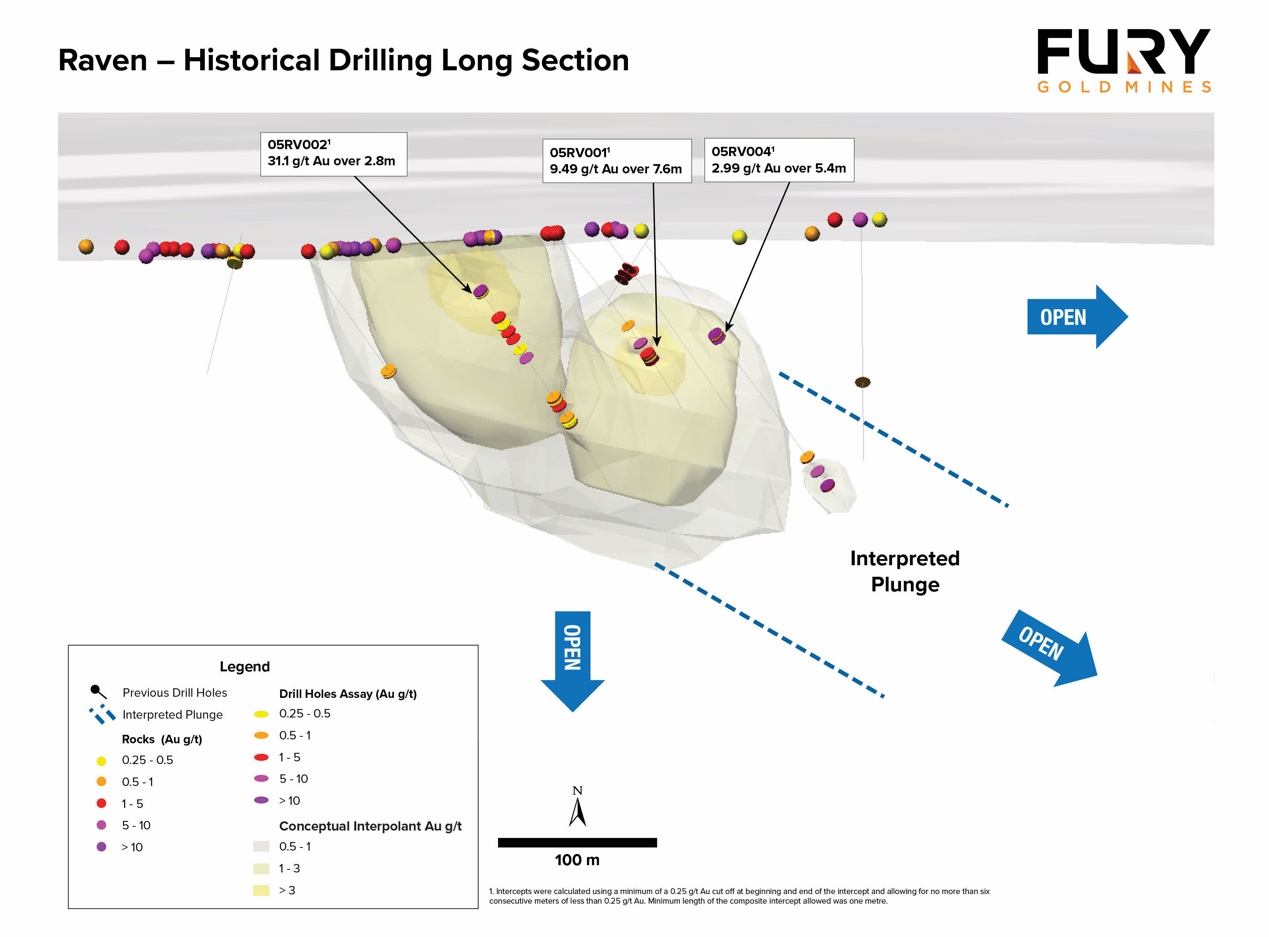 Figure 4: Illustrates a long section view of the high-grade drilling at Raven with an interpreted 30-degree plunge. 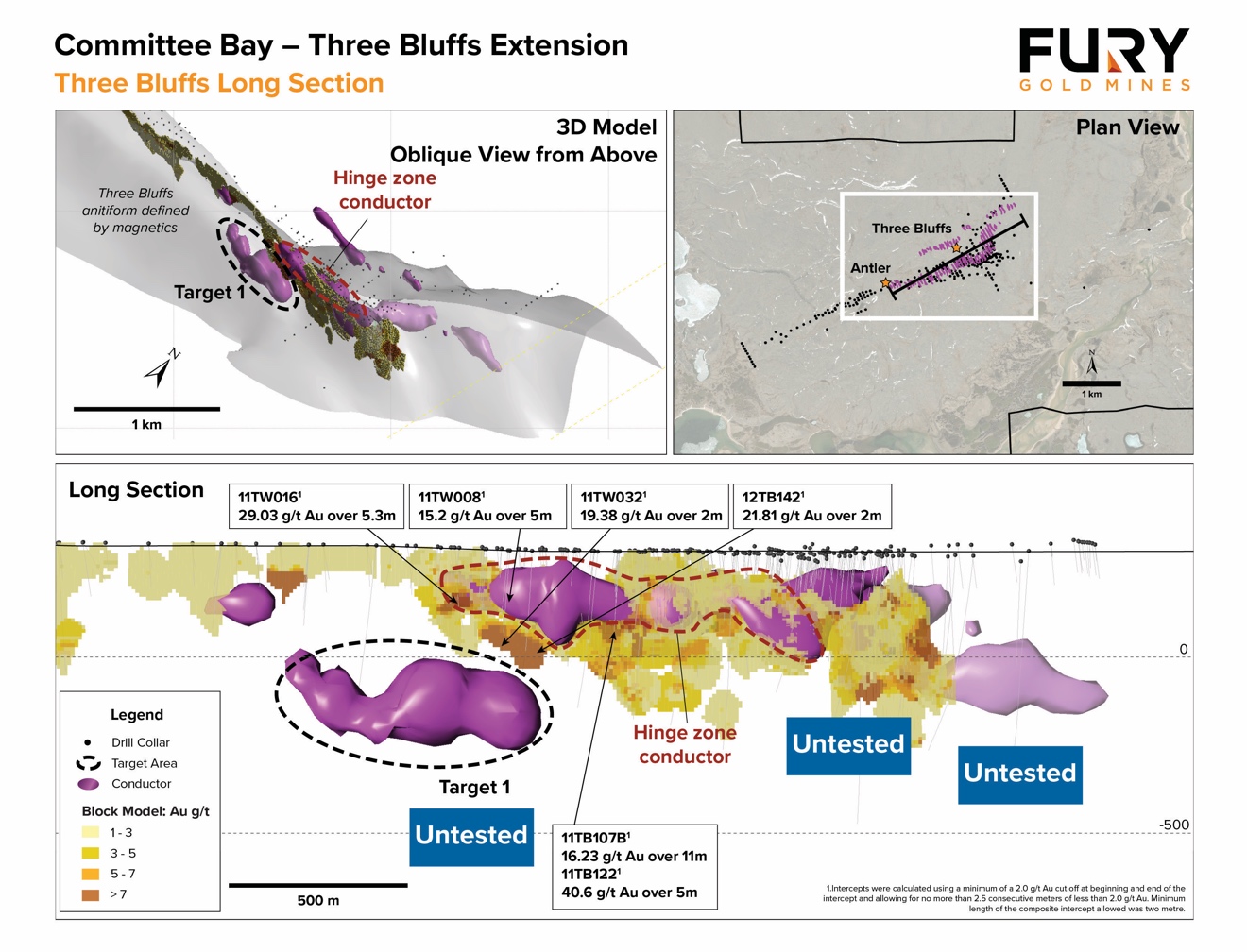 Figure 5: Illustrates the 600m by 200m conductor that Fury plans to drill test during the summer of 2021 with the aim of expanding the resource at the Three Bluffs deposit.

Michael Henrichsen, P.Geo, SVP, Exploration at Fury, is the "qualified person" within the meaning of National Instrument 43-101 - Standards for Disclosure of Mineral Projects and has reviewed technical disclosures in this press release.

Analytical samples were taken by sawing NQ diameter core into equal halves on site and sent one of the halves to ALS Lab in Vancouver, BC for preparation and analysis. All samples are assayed using 50g nominal weight fire assay with gravimetrical finish (Au-GRA22) in year 2016 and with atomic absorption finish (Au-AA26) in 2018 and multi-element four acid digest ICP-AES/ICP-MS method (ME-MS61). QA/QC programs using internal standard samples, field and lab duplicates and blanks indicate good accuracy and precision in a large majority of standards assayed.

Approximately 1-2kg of material was collected for analysis and sent to ALS Lab in Vancouver, BC for preparation and analysis. All samples are assayed using 50g nominal weight fire assay with atomic absorption finish (Au-AA26) and multi-element four acid digest ICP-AES/ICP-MS method (ME-MS61). QA/QC programs for rock grab samples using internal standard samples, lab duplicates, standards and blanks indicate good accuracy and precision in a large majority of standards assayed. Grab samples are selective in nature and cannot be consider as representative of the underlying mineralization.

Samples (~250g) of unweathered till were collected from 20-30cm depth in frost boils at 100m sample spacing. Pebbles (>1cm) were removed in the field. Samples were not collected in areas of glaciofluvial or fluvial reworking. Collected samples were returned to camp to be analyzed in the field. Samples were air-dried, then 50g of sediment was spread over a clean creased paper. Samples were gently shaken to separate and discard coarse sand/pebbles, leaving a fine sand/silt. ~10-20g of this material was transferred to a 2"x3" plastic zip bag, labelled, and analyzed with a benchtop mounted pXRF in Soil Mode for 90 seconds. QA/QC included regular standard samples and field duplicates.

Fury Gold Mines Limited is a Canadian-focused exploration and development company positioned in three prolific mining regions across the country. Led by a management team and board of directors with proven success in financing and developing mining assets, Fury will aggressively grow and advance its multi-million-ounce gold platform through project development and potential new discoveries. Fury is committed to upholding the highest industry standards for corporate governance, environmental stewardship, community engagement and sustainable mining. For more information on Fury Gold Mines, visit www.furygoldmines.com.

There can be no assurance that such statements will prove to be accurate, and actual results and future events could differ materially from those anticipated in such statements. Forward-looking information reflects the beliefs, opinions and projections on the date such statements are made and are based on a number of assumptions and estimates that, while considered reasonable at the time, are inherently subject to significant business, economic, competitive, political and social uncertainties and contingencies. Such assumptions, which may prove to be incorrect, include: general economic and industry growth rates; the Company's budget, including expected costs and the assumptions regarding market conditions; the Company's ability to raise additional capital to proceed with its exploration, development and operations plans; the Company's ability to obtain or renew the licenses and permits necessary for its current and future operations; and the Company's assumptions around the impact of the COVID-19 pandemic. Although the Company believes that the assumptions and expectations reflected in those forward-looking statements were reasonable at the time such statements were made, there can be no assurance that such assumptions and expectations will prove to be correct.

The mining and technical disclosure throughout this release is made in accordance with applicable Canadian law and the guidelines set out in the Canadian Institute of Mining, Metallurgy and Petroleum ("CIM") CIM Definition Standards on Mineral Resources and Mineral Reserves ("CIM Standards"). The Company's descriptions of its projects using applicable Canadian law and CIM Standards may not be comparable to similar information made public by U.S. companies subject to the reporting and disclosure requirements under the United States federal securities laws and the rules and regulations thereunder.

[1] Refer to the technical report entitled "Technical Report on the Committee Bay Project, Nunavut Territory, Canada" dated May 31, 2017 as amended October 23, 2017, which is available under the Company's SEDAR profile at www.sedar.com. Resources are estimated at cut-off grades of 3.0 g/t gold for open pit and 4.0 g/t gold for underground.