VANCOUVER, BC / ACCESSWIRE / February 16, 2021 / Endurance Gold Corporation (TSXV:EDG) (the "Company") is pleased to report results from the biogeochemical survey completed during the 2020 field season at its Reliance Gold Property (the "Property") in southern British Columbia. The Property is located 4 kilometres ("km") east of the village of Gold Bridge with year-round road access, and 10 km north of the historic Bralorne-Pioneer Gold Mining Camp which has produced about 4 million ounces of gold. The 240-hectare biogeochemical survey was designed to test for blind mineralization obscured by the thick volcanic pumice tephra-ash that blankets the Property.

Encouraging results from the biogeochemical survey include:

The attached figure displays the biogeochemical samples elevated in arsenic, along with outlines of the above-noted biogeochemical targets. This survey is an expansion of a previously reported biogeochemical/soil orientation survey that the Company completed over a 850 m long strike length of the Royal Shear encompassing several of the known gold targets (see News Release September 21, 2020). The results of that orientation survey indicated that elevated arsenic in Douglas Fir tree clippings identified a biogeochemical anomaly which is coincident with a greater than 100 parts per billion gold-in-soil anomaly.

The Royal Shear Anomaly (greater than 80th percentile) has been expanded to approximately 2,000 m of strike. At the Upper Eagle Target, the survey has recognized an important 400 m southeast extension to the more intense 90th percentile anomaly of the Eagle Zone. The 400 m extension is measured from the Eagle 3 outcrop, the furthest southeast surface exposure of the Eagle Zone where the Company's channel sampling returned 4.88 gpt gold over 23.5­ m, including two higher grade intervals of 8.60 gpt gold over 9.1 m and 10.87 gpt gold over 2.1 m (see News Release November 16, 2020). The Company recently completed two reverse circulation ("RC") drill holes below Eagle 3 and assay results are pending. Preliminary geological and geochemical modeling indicate that the Eagle Zone mineralization is interpreted to be hosted within a low-angle shear structure striking northwest and dipping southwest at approximately 35 degrees. The Eagle Zone remains open to expansion downdip to the southwest, and along strike to the southeast which coincides with the Upper Eagle biogeochemical anomaly.

The Treasure Shear Anomaly is coincident with a northwest-southeast trending lineament that is sub-parallel and approximately 300 m to the northeast of the Royal Shear. The Treasure Shear could be a footwall fault related to the Royal Shear mineralizing event but has not seen any recent exploration with the exception of the Company's property-scale mapping and airborne magnetics geophysics. The Carter Zone Anomaly area was previously tested with three drill holes in 2008 by a previous operator. The drill holes intersected narrow a quartz-arsenic-antimony shear and stockwork veins within wide areas of ankerite altered volcanics. The best gold assay intervals were 1.34 gpt gold over 1 m and 0.95 g/t gold over 2.1 m. The Company will re-evaluate these historic results incorporating the new geological and structural models being developed.

The biogeochemical survey included 1,207 samples of Douglas Fir tree clippings collected at approximately 25 m sample intervals along 100 m spaced contour lines. The survey was efficiently completed over a period of 16 days by a 4-man sampling crew and was oriented to test the interpreted 2.5 km strike length of the Royal Shear over an elevation which ranged from 660 m to 1,800 m above sea level. The Company expects to complete additional talus fine soil sampling in the areas of the stronger biogeochemical responses and to expand the biogeochemical survey to cover the remainder of the property. The Company has commenced planning for the 2021 exploration program to further evaluate these anomalies and add additional targets for 2021 drilling.

Endurance Gold Corporation is a company focused on the acquisition, exploration and development of highly prospective North American mineral properties with the potential to develop world-class deposits.

Douglas Fir clippings weighing approximately 350 grams per sample were submitted to ALS Global in North Vancouver, BC, an ISO/IEC 17025:2017 accredited laboratory, where the Douglas Fir clippings were prepped for analysis and then air dried. An average homogenized weight of 24 grams of the collected and dried sample was then ashed at 475 degrees centigrade for 24 hours (prep method code VEG-ASH01) for a resultant average weight of 0.6 grams. The ashed samples were then submitted for nitric/hydrochloric acid digestion and analyzed for trace elements and gold with an ICP-MS finish (method code AuME-VEG41a). Analytical results are reported to the Company based on the ashed weight.

RC samples were collected under the supervision of a geologist at the drilling rig. Drilling was completed using a 3.5 inch hammer bit and rock chip samples were collected using a cyclone. Sample size were reduced to 1/8th size with a riffle splitter at the drilling rig. A second duplicate split and coarse chips were collected for reference material and stored. All RC samples were submitted to ALS Global in North Vancouver, BC, an ISO/IEC 17025:2017 accredited laboratory, where they are crushed to 70% <2 mm then up to 250 gram pulverized to <75 microns. Samples are then submitted for four-acid digestion and analyzed for 48 element ICP-MS (ME-MS61) and gold 30g FA ICP-AES finish (AU-ICP21). Over limit samples returning greater than 10 ppm gold are re-analyzed by Au-GRA21 methodology and over limit antimony returning greater than 10,000 ppm Sb are re-analyzed by Sb-AA08 methodology. The pXRF analysis was conducted by a Company geotechnician at the project site on the RC coarse chips that were saved as reference material. An Olympus Vanta XRF Analyzer was used for the analysis which is capable of measuring elements from concentrations as low as single parts per million (ppm). The work program was supervised by Darren O'Brien, P.Geo., an independent consultant and qualified person as defined in National Instrument 43-101. Mr. O'Brien has reviewed and approved this news release.

Neither the TSX Venture Exchange nor its Regulation Services Provider (as that term is defined in the policies of the TSX Venture Exchange) accepts responsibility for the adequacy or accuracy of this news release. This news release may contain forward looking statements based on assumptions and judgments of management regarding future events or results that may prove to be inaccurate as a result of factors beyond its control, and actual results may differ materially from the expected results. 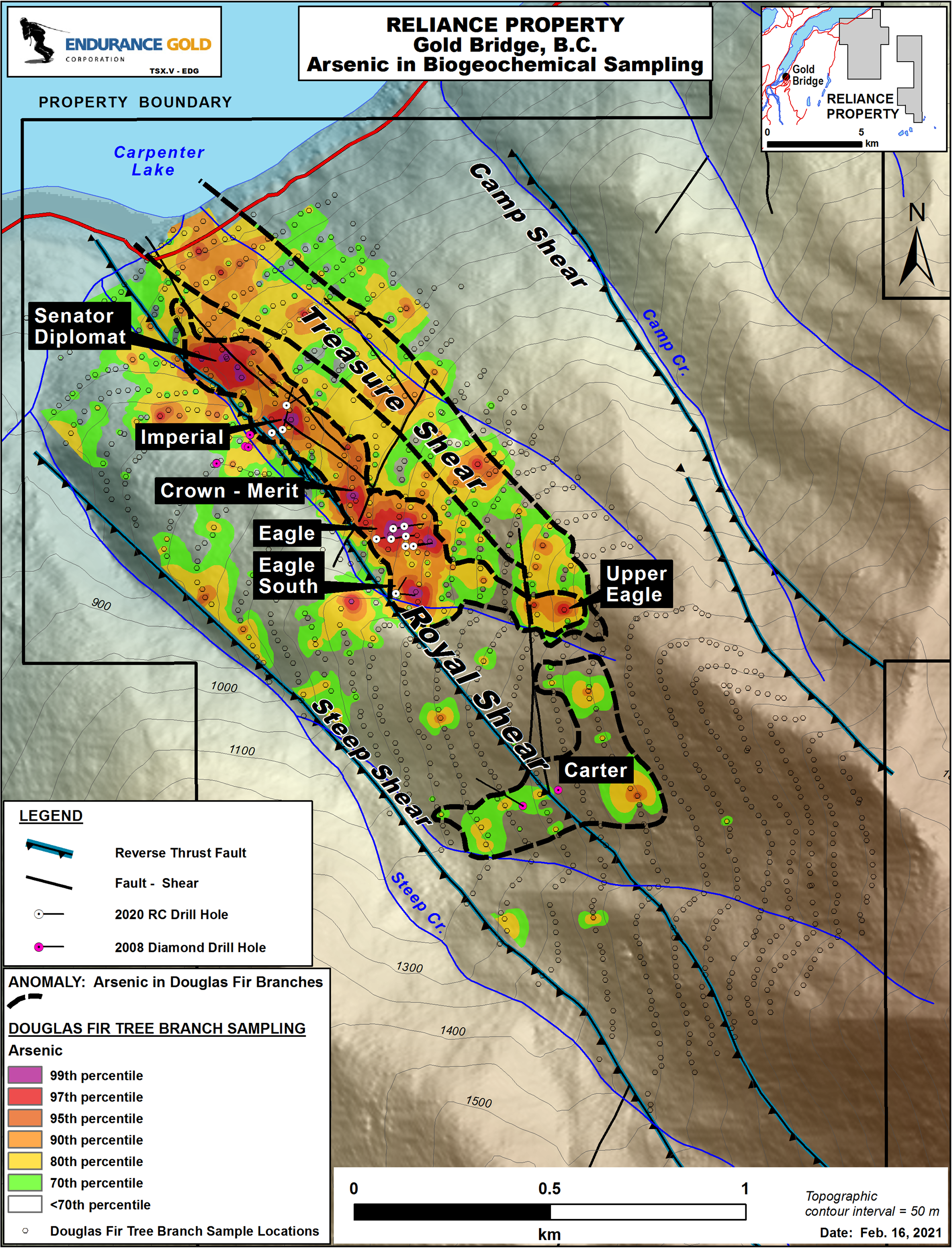