VANCOUVER, BC / ACCESSWIRE / February 16, 2021 / Black Tusk Resources Inc. ("Black Tusk" or the "Company) (CNSX:TUSK)(FSE:0NB)(OTC PINK:BTKRF) is pleased to announce that the first three drill holes have been completed on the McKenzie East gold property located north of Val d'Or, Quebec. The company has now completed 1,049 metres of drilling over the three completed holes. Thus far, drill hole MKE 21-03 has shown the greatest promise of mineralization, including a section of narrow quartz vein containing a grain of visible gold.

Dr Mathieu Piché, OGQ, is in charge of core processing on the McKenzie East Gold project. His preliminary observations of hole MKE 21-03 indicate an approximate 30 metre section of core that contains geologic characteristics conducive to gold mineralization. This includes the approximate 1mm by 2mm size gold grain, as well as veining, alterations and associated sulphide minerals. However, the reader is warned the presence of visible gold and other indicators in core does not assure high assay results when processed at the laboratory. Samples from hole MKE 21-03 have been received at ALS Laboratory in Val d'Or. Three samples taken across the zone containing the visible gold will be "rush" processed for gold analysis.

Photograph of gold grain identified at margin of a narrow quartz vein (white arrow).
Canadian dollar coin on left side for scale 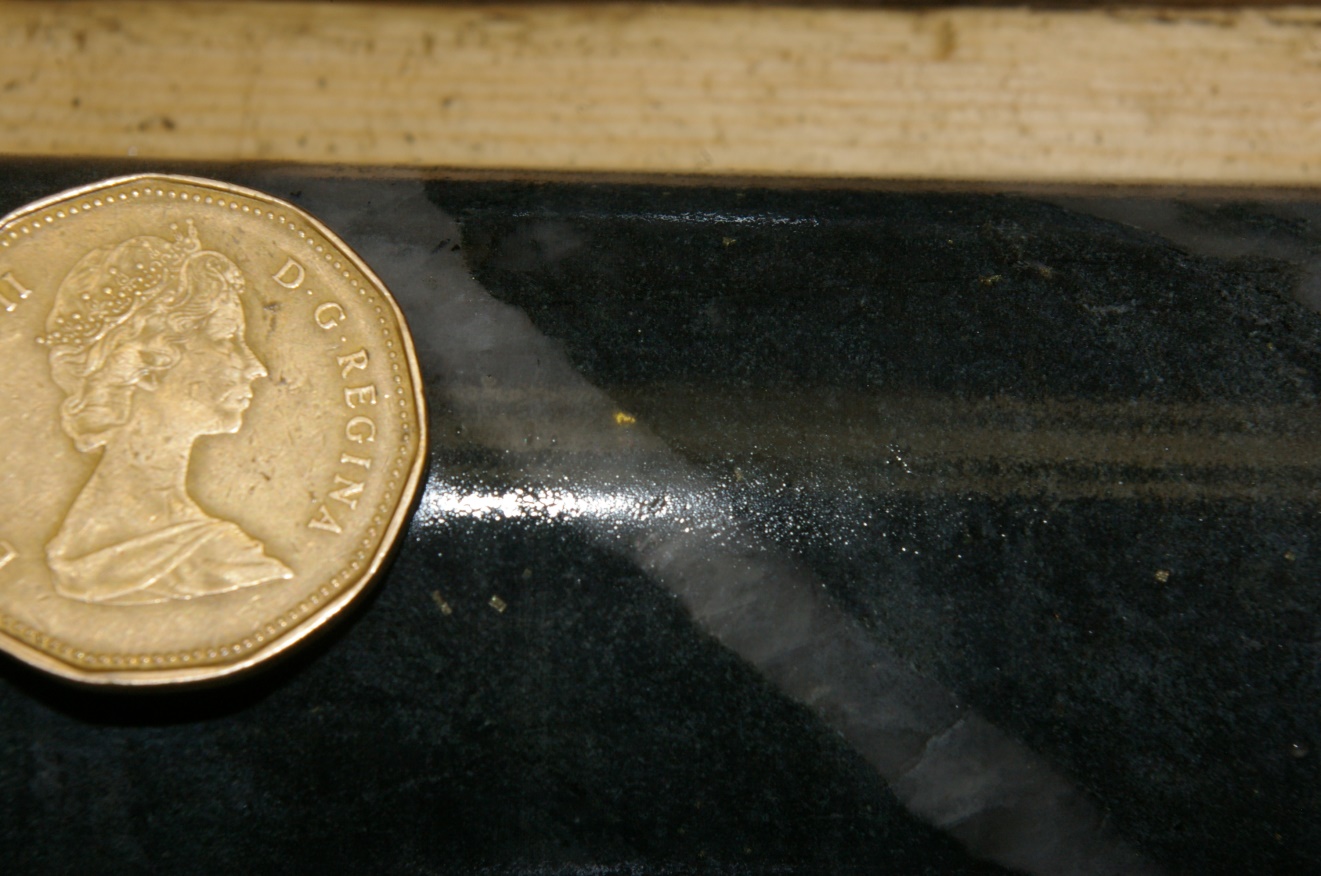 Drill core is currently being logged and sampled at the Black Tusk secure facility located near the property. Samples are being taken directly to ALS Laboratory located in Val d'Or. Samples are continuously under custody of the Black Tusk team members until delivered to the lab. Black Tusk undertakes QA/QC procedures including insertion of blanks and standards at regular intervals into the sample stream.

"The company is very encouraged by the positive results obtained within the first 3 holes of the 2021 winter drilling, and recognizes that the extent of gold mineralization is still to be determined from drill core laboratory results" says Richard Penn, CEO. Black Tusk plans to continue diamond drilling the predetermined targets identified by their geophysical and geochemical surveys. The drill holes are all within an area of approximately one kilometre by 700 metres along the previously untested geologic trend through the property. Drill pad and access construction is continuing as the drilling progresses.