VANCOUVER, BC / ACCESSWIRE / February 12, 2021 / With drill hole confirmation of a grassroots gold-silver discovery at its 100%-owned flagship Foremore Property in the Eskay Camp (refer to Feb. 5, 2021 NR), Sassy Resources Corporation ("Sassy" or the "Company") (CSE:SASY)(FSE:4E7)(OTCQB:SSYRF) is pleased to announce a revamped strategy around its second project in order to focus resources on Foremore and create dynamic new shareholder value creation opportunities.

Rather than push forward with a planned exploration drill program at Nicobat in Q1 2021, Sassy is in final negotiations to monetize the Nicobat asset by optioning it to a battery metals focused private Canadian exploration company in exchange for shares in that entity and a multi-year work commitment. The private company's intention is to seek a listing on the Canadian Stock Exchange (CSE). Sassy shareholders will be kept informed of developments. The Company can give no assurances at this time that a definitive agreement will be completed.

Sassy has formed a wholly-owned subsidiary, Gander Gold Corporation, to pursue discovery opportunities in Newfoundland, one of the most exciting exploration districts in Canada at a current stage that's similar to the early development of the Eskay Camp around the time of the Eskay Creek discovery. The creation of Gander Gold gives Sassy multiple strategic options to further build shareholder value through the balance of 2021 and beyond in ways that will be complementary, and non-dilutive, to the Company's flagship Foremore Property and the exciting new gold-silver discovery at the Westmore Discovery Zone.

Notably, Gander North features very high historic gold-in-till anomalies along its western and northern boundaries. The adjoining property is Jonathan's Pond, currently being explored by Exploits Discovery (CSE: NFLD), where some of the highest till anomalies in Newfoundland (up to 410,000 ppb or 410 g/t Au, refer to Exploits' Dec. 10, 2020, NR) trend onto parts of Gander North (see attached maps which also include proposed drill holes at Gander North).

Under-explored Gander South offers strong upside exploration potential given its favorable stratigraphy and structure (Dog Bay Line) and an historic gold and arsenic stream silt anomaly yet to be investigated. Claims are located on strike with the Beaver Brook antimony mine within as little as 5 kilometers northwest of NFG's Eastern Pond discovery defined by sub crop and till sample results over a minimum strike length of four kilometers.

Vulcan will retain a 3% royalty covering the 624 claims. Sassy has the right to repurchase one-half of that NSR (1.5%) for $2,000,000 in cash and 500,000 shares within one year following delivery to Vulcan of a Feasibility Report.

The technical information in this news release has been reviewed and approved by Mr. Ian Fraser, P. Geo., Vice President of Exploration for Sassy Resources. Mr. Fraser is the Qualified Person responsible for the scientific and technical information contained herein under National Instrument 43-101 standards. 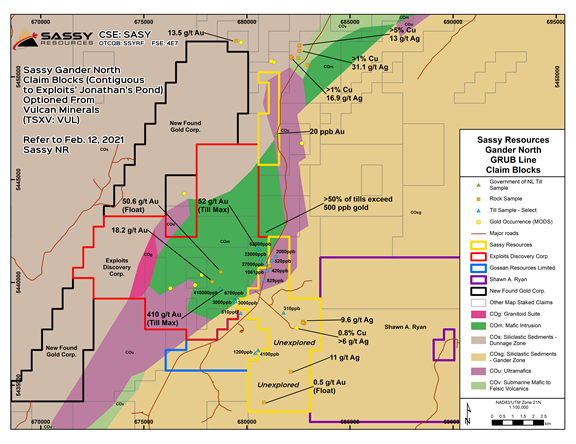 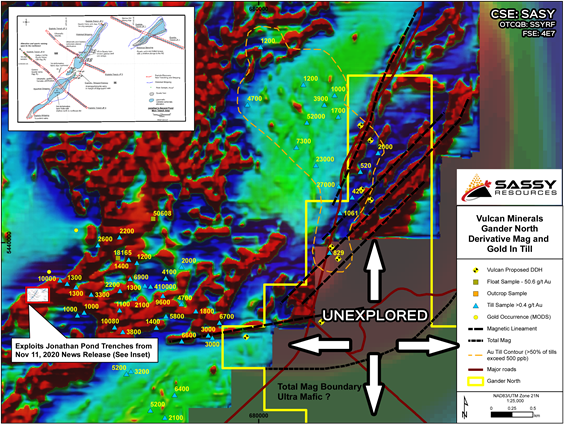 Sassy Resources is an exploration stage resource company currently engaged in the identification, acquisition and exploration of high-grade precious metal and base metal projects in North America. Its current focus is the Foremore Gold-Silver Project located in the Eskay Camp, Liard Mining Division, in the heart of Northwest B.C.'s prolific Golden Triangle.

Investors are cautioned that, except for statements of historical fact, certain information contained in this document includes "forward looking information", with respect to a performance expectation for Sassy Resources Corporation. Such forward looking statements are based on current expectations, estimates and projections formulated using assumptions believed to be reasonable and involving a number of risks and uncertainties which could cause actual results to differ materially from those anticipated. Such factors include, without limitation, fluctuations in foreign exchange markets, the price of commodities in both the cash market and futures market, changes in legislation, taxation, controls and regulation of national and local governments and political and economic developments in Canada and other countries where Sassy carries out or may carry out business in the future, the availability of future business opportunities and the ability to successfully integrate acquisitions or operational difficulties related to technical activities of mining and reclamation, the speculative nature of exploration and development of mineral deposits, including risks obtaining necessary licenses and permits, reducing the quantity or grade of reserves, adverse changes in credit ratings, and the challenge of title. The Company does not undertake an obligation to update publicly or revise forward looking statements or information, whether as a result of new information, future events or otherwise, unless so required by applicable securities laws. Some of the results reported are historical and may not have been verified by the Company.

The CSE has neither approved nor disapproved the contents of this news release. Neither the CSE nor its Regulation Services Provider (as that term is defined in the policies of the CSE) accepts responsibility for the adequacy or accuracy of this release.