Anaconda Mining Intersects 6.50 g/t Over 16.0 Metres and 2.84 g/t Gold Over 8.0 Metres at Stog'er Tight and Discovers New Zone of Mineralization

Anaconda Mining Intersects 6.50 g/t Over 16.0 Metres and 2.84 g/t Gold Over 8.0 Metres at Stog'er Tight and Discovers New Zone of Mineralization

TORONTO, ON / ACCESSWIRE / February 4, 2021 / Anaconda Mining Inc. ("Anaconda" or the "Company") (TSX:ANX)(OTCQX:ANXGF) is pleased to announce initial results from its on going 2,500 metre infill drill program at Stog'er Tight (the "Infill Drill Program") as well as the final results from the original exploration drill program, which commenced in August of 2020. Both programs took place near, or along strike from, the Stog'er Tight Mine and Deposit, located approximately three (3) kilometres east of the Company's operating Pine Cove Mill and Tailings Facility in Newfoundland (Exhibit A).

The exploration drill results comprise a remaining 660 metres of drilling (BN-20-362 to 367) near Camp Pond at Stog'er Tight (Exhibit A). Exploration drill results included a 12.8 metre intersection of gold mineralization of 0.93 g/t just ten metres below surface. This is significant as it was discovered 50 metres south of mineralization that was previously thought to terminate towards the south (Exhibit A). Importantly, the drilling indicates that this new mineralized zone is very shallow and continues southward by up to 250 metres at a shallow dip, immediately below surface.

The results to date from the Infill Drill Program comprise 1,794.6 metres (BR-20-368 to 392), which continue to intersect mineralization with similar characteristics and tenor to those previously drilled in the area. The results are being used to support an updated in-house resource model and pit shells and are indicating the strong potential to extend the mine life of the Point Rousse operation.

Highlights of the Drill Program include:

Selected intersections from the Drill Program at Stog'er Tight are shown in Table 1 below.

"We are very pleased with the results from our earlier exploration drilling at Stog'er Tight and the initial results from a related infill drill program, which continue to demonstrate the potential to extend the life of mine of the Point Rousse operation. Infill drilling continues to outline and confirm a continuous gold system near Camp Pond and exploration drilling has identified a new zone of near-surface mineralization at Stog'er Tight. This most recent discovery has resulted in a new geological interpretation that the mineralized host rocks are near horizontal in this area and that the potential for gold mineralization extends southward by at least 250 metres, just below surface. To test this concept and the continuity of near surface mineralization, we have initiated a further 1,000 metres drill program in this new area of interest. The results of the infill and exploration programs, as well as ongoing drilling, will be incorporated into our in-house mineral resource as we begin to plan for a potential development scenario at Stog'er Tight.

The results of the Infill Drill Program indicate that a zone of gold mineralization extends at least 720 metres west and south the Stog'er Tight Mine and represents the strike extension of the original Stog'er Tight Deposit. Mineralization now extends over a total strike length of approximately 1,250 metres. Gold mineralization is hosted within a shallowly northwest dipping to locally sub-horizontal gabbro sill and has been tested to a vertical depth of 115 metres. The Company will continue to update in-house, non-National Instrument 43-101 ("NI43-101") compliant, resource estimate combining recent results with the previously announced NI43-101 compliant Mineral Resource Estimate for Stog'er Tight* announced on August 4th, 2020 and available on the Company's SEDAR profile.

To facilitate the potential development of the deposit west of the Stog'er Tight Mine, preliminary environmental studies have been initiated at Camp Pond, which would likely be impacted by development activity. Fox Pond, located east of Camp Pond, was similarly underlain by the Stog'er Tight Deposit which was successfully mined in 2018 and 2019 by partial dewatering of the pond under appropriate Provincial and Federal Government authorizations.

1 - Diamond drill holes BN-20-362 to -392 were drilled consecutively. Any drill hole numbers not shown in the table above have no significant assays.
2 - Interval expressed as core length only; true thickness is estimated to be 50-100% of interval length due to local drilling conditions that does not always allow for drilling orthogonally to the apparent dip of mineralization.

The Stog'er Tight Deposit, located three (3) kilometres east of the Pine Cove Mill adjacent to existing road networks, has been defined over a strike length of 1,250 metres to date. Anaconda produced a total of 17,102 ounces of gold from 349,942 tonnes of ore from the Stog'er Tight Mine between June 2018 and January 2020. Gold from Stog'er Tight was recovered through the Pine Cove Mill with an average head grade of 1.75 g/t gold at an overall recovery of approximately 87%. Anaconda is currently assessing the potential for expanding the Stog'er Tight Deposit and developing additional resources, and ultimately reserves, along strike.

All samples and the resultant composites referred to in this release were collected using QA/QC protocols including the regular insertion of certified standards and blanks within each sample batch sent for analysis and completion of check assays of select samples. Diamond drill core and percussion samples were analyzed for Au at Eastern Analytical Ltd. in Springdale, NL ("Eastern"), using standard fire assay (30 g) pre-concentration and Atomic Absorption finish methods. Eastern is a fully accredited firm within the meaning of NI 43-101 for provision of this service.

Anaconda is a TSX and OTCQX-listed gold mining, development, and exploration company, focused in Atlantic Canada. The company operates mining and milling operations in the prolific Baie Verte Mining District of Newfoundland which includes the fully-permitted Pine Cove Mill, tailings facility and deep-water port, as well as ~15,000 hectares of highly prospective mineral lands including those adjacent to the past producing, high-grade Nugget Pond Mine at its Tilt Cove Gold Project. Anaconda is also developing the Goldboro Gold Project in Nova Scotia, a high-grade resource and the subject of an on-going feasibility study. 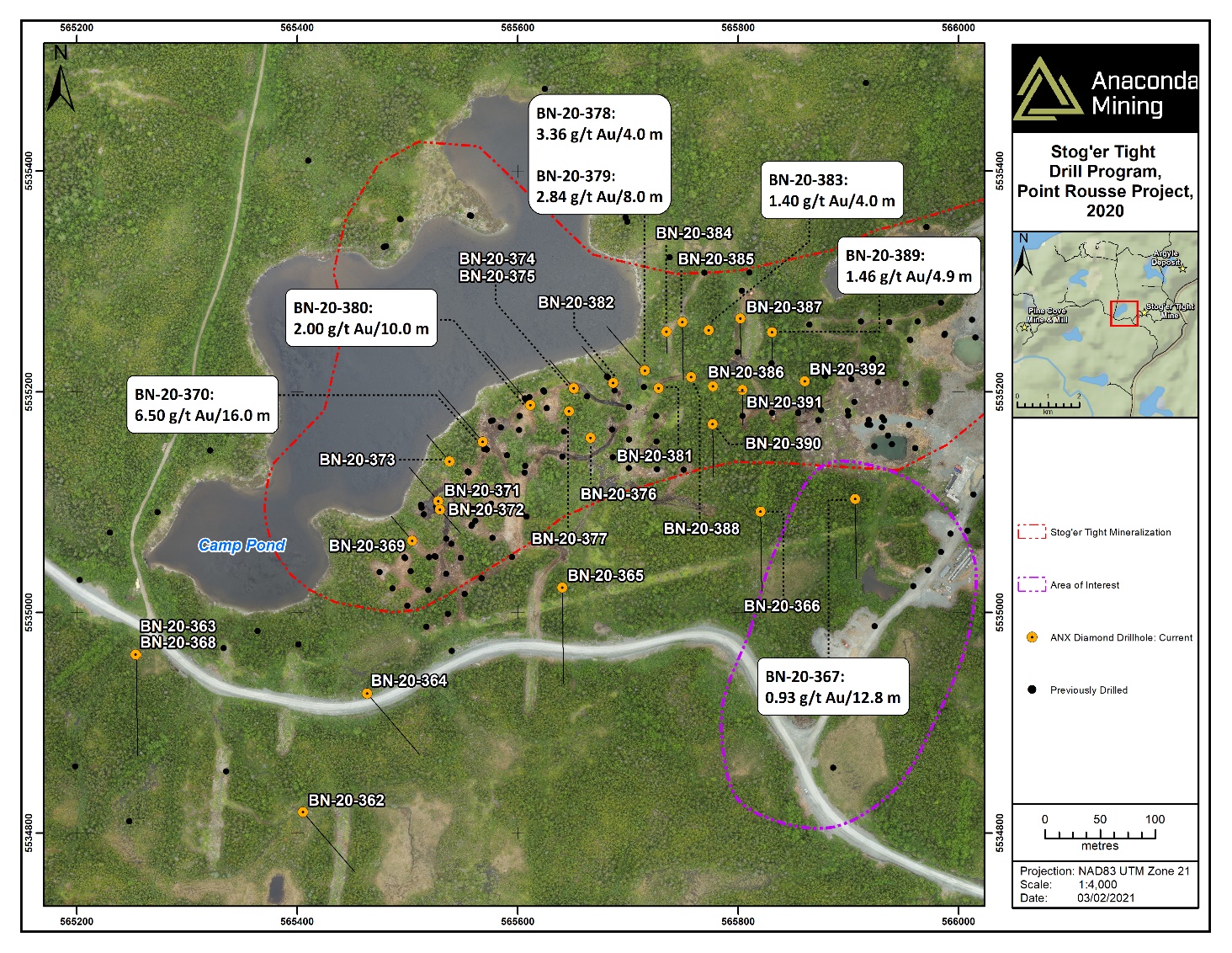 Exhibit A. A map showing the location of the initial results from the Infill Drill Program (BN-20-368 to -392) as well as the final results of the Exploration Drill Program (BN-20-362 to -367). Hole BN-20-367 intersected mineralization in an area previously untested and resulted in a new geological interpretation that mineralized host rocks may extend up to 250 metres to the south. This new area of interest will be drill tested with an additional 1,000 metres of diamond drilling.