TORONTO, ON / ACCESSWIRE / February 3, 2021 / E2Gold Inc. begins its first drill program on its Hawkins Gold Project in north-central Ontario. The program aims to enlarge the McKinnon Zone, a shallow Inferred Mineral Resource of 328,800 ounces of gold (6.2 million tonnes grading 1.65 g/t),1 located in the center of the 60 km long Hawkins Project.

Falconbridge Ltd. drilled the project in the 1980's, identifying significant gold mineralization over a 3.5 km long trend (the McKinnon Zone) open along strike and below 150 m depth. A decade later, Don McKinnon Sr., co-discoverer of Hemlo, staked claims based on geologic similarities to Hemlo, but as Canadian explorers turned their attention to overseas saprolite deposits, this Ontario project saw little subsequent work. Renewed interest in lode gold deposits brought explorers back home, leading to new discoveries and production in the region such as the Borden, Sugar Zone, and Island Gold mines, as well as the Cote Lake Gold Project.

Eric Owens, President and CEO, said, "The time is right for E2Gold to shed new geologic light onto this promising deposit, which begins with this inaugural drill program. Stay tuned for results." 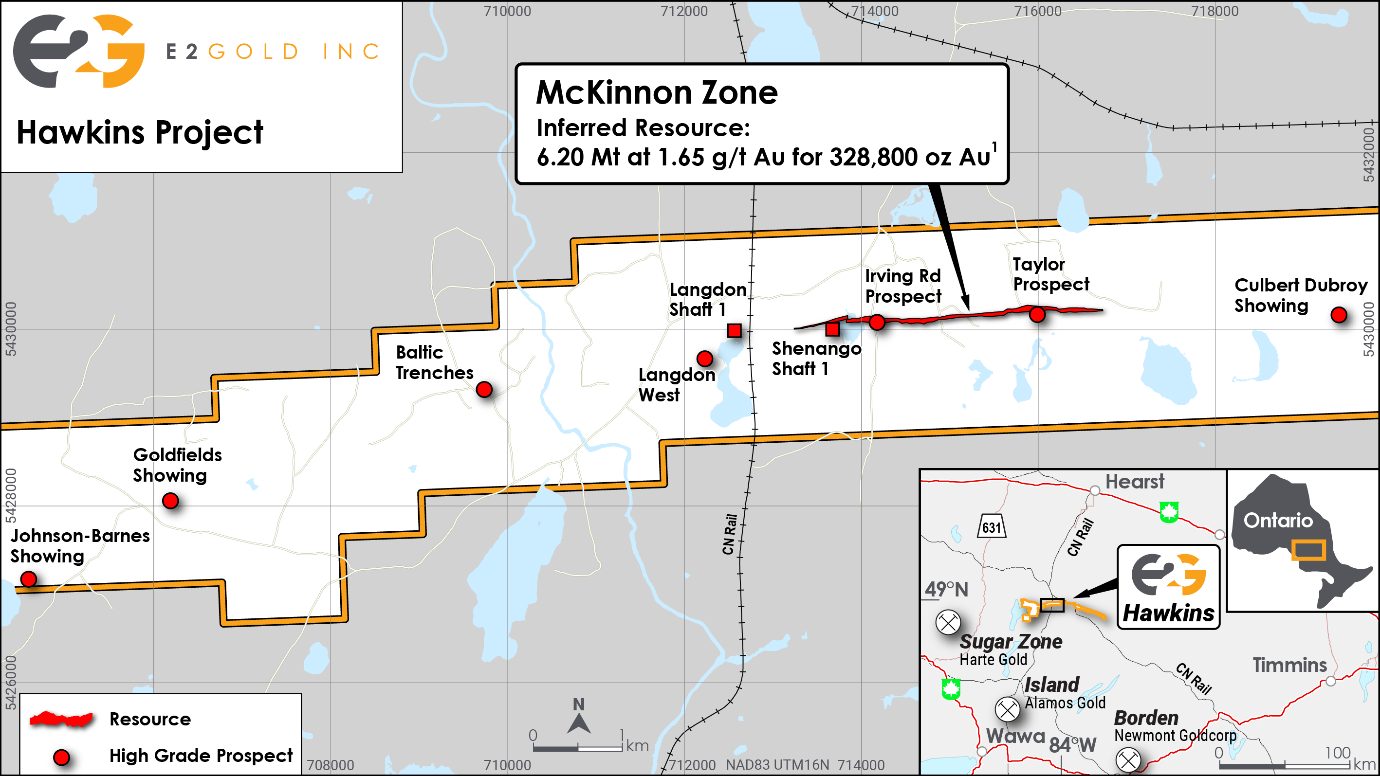 The 8,000 m drill program will occur in two phases: a winter phase and a summer phase. The winter program will test a number of targets in and around the McKinnon Zone, including in, below, and along strike with, the Inferred Mineral Resource, which is open in these directions. In addition, E2Gold plans to drill below some of the as yet untested high grade prospects.

1980's Falconbridge Drilling. The Inferred Mineral Resource of the McKinnon Zone is largely based on 79 holes completed by Falconbridge Ltd. in the mid 1980's, which were selectively re-sampled by P&E Mining Consultants Inc. to provide modern sampling correlation with the historical assays. Selected Falconbridge assay results are presented below:

Historical Prospects: In addition, certain prospects such as Shenangno (6.84 g/t over 5m) and Taylor (4.8 g/t over 3.0 m) will also be tested by drilling.

Claims comprising the remaining portion of the 60 km-long Hawkins Gold Project lying outside the15 km core area are mostly virgin territory, having had little work conducted on them over the past 100 years. E2Gold aims to conduct reconnaissance style geology and geophysics in these areas in the coming year in order to aid in target identification.

Optioned Shares: In other news, E2Gold announces that it has agreed to issue an aggregate of 543,478 common shares (the "Option Shares") at a deemed price of $0.184 per share, in satisfaction of the share payment valued at $100,000 which is due pursuant to the option agreement between the Company and Pavey Ark Minerals Inc. dated January 28, 2020 (the "Option Agreement"). This issuance is being effected in partial exercise of the option granted to the Company pursuant to the Option Agreement to acquire a 100% interest in 400 contiguous single cell mining claims plus 19 boundary cell claims (together, the "Optioned Claims"), subject to certain net smelter return royalties, comprising, in part, the property known as the Hawkins Gold Project.

The issuance of the Option Shares remains subject to the approval of the TSX Venture Exchange (the "TSXV").

E2Gold Inc. is a Canadian gold exploration company which recently completed an overbought Initial Public Offering, listing on the TSX Venture Exchange. Its large flagship property, the Hawkins Gold Project, covers 7 townships in north-central Ontario, about 140 km east of Hemlo. The McKinnon Zone is at surface with a NI43-101 Inferred Mineral Resource of 6.2 million tonnes grading 1.65 g/t for 328,800 ounces of gold.1 The Company has all relevant permits in place to complete its planned program.

E2Gold has an option agreement with Pavey Ark Minerals Inc. to acquire a 100% interest in the Hawkins Gold Property in the Sault Ste Marie and Porcupine Mining Divisions, Ontario. Pavey Ark, a private Ontario company, is a mineral exploration project generator in eastern and central Canada with several advanced base and precious metal exploration properties. Information on Pavey Ark is available at www.paveyarkminerals.com.