TORONTO, ON / ACCESSWIRE / January 27, 2021 / Avidian Gold Corp. ("Avidian" or the "Company") (TSXV:AVG) & (OTCQB:AVGDF) is pleased to announce that it has initiated the permitting process for the 2021 drill program at its 100% owned Amanita Project located in the Fairbanks Mining District. The prime objective of the 2021 drill program will be delineation drilling of the NE-SW striking mineralized trend intersected in hole AM20-02 (Avidian Press Release dated December 17, 2020). A secondary objective is to test the sub parallel mineralized zone to the immediate south of AM20-02 and continue testing additional exploration targets identified at Amanita. The Amanita property is located 5 kilometres southwest and contiguous to Kinross Gold's (TSX: K) Fort Knox mine.

On December 17 2020, the Company released the results of the first two drill holes from the 2020 drill campaign at Amanita. Gold mineralization was encountered in both holes, with the highlight being 22.72 m of 3.11 g/t Au in Hole AM20-02; this intersection occurs approximately 60 metres below Trench D-West, which returned 27.0 m of 4.22 g/t Au (see Figure 1) (Avidian Press Release dated January 7, 2020). The NE-SW striking mineralized trend intersected by AM20-02 has now been tested in four different places over a strike length of approximately 200 m. This includes historical RC hole AH-14 which intersected 16.76 m @ 1.03 g/t Au at a depth of 75 m located approximately 80 m northeast of hole AM20-02. This mineralized zone remains open on strike in both directions and down dip. Drilling in 2021 will focus on expanding the on strike and down dip extent of this mineralized trend.

The mineralized trend tested by AM20-02 is one of several mineralized trends identified on the Amanita property. A second mineralized trend sub parallel and to the immediate south was tested by Kinross's historic hole AH-5. Avidian's hole AM20-03 was designed to test this zone. Assays are still pending but it is anticipated additional drilling will be done on this zone as well in 2021.

Avidian President Steve Roebuck states: "We are preparing for a break-out exploration season at Amanita in 2021. Plans include step-out drilling along strike and down dip of AM20-02 with the goal of outlining at-surface oxide gold mineralization along the trend and the down dip extent of the zone. A similar exercise will be completed on the sub paralleling mineralized trend to the immediate south. Despite the unprecedented delays in receiving assays from the lab we are very confident in proceeding with a drill program, at a minimum, to begin expanding the mineralization in the area of AM20-02".

Qualified Person
The technical information contained in this news release has been approved by Steve Roebuck, P.Geo., President of Avidian, who is a Qualified Person as defined in "National Instrument 43-101, Standards of Disclosure for Mineral Projects."

About Avidian Gold Corp.
Avidian brings a disciplined and veteran team of project managers together with a focus on advanced stage gold exploration projects in Alaska. Avidian's Golden Zone project hosts a NI 43- 101 Indicated gold resource of 267,400 ounces (4,187,000 tonnes at 1.99 g/t Au) plus an Inferred gold resource of 35,900 ounces (1,353,000 tonnes at 0.83 g/t Au)*. Additional projects include the Amanita and the Amanita NE gold properties which are both adjacent to Kinross Gold's Fort Knox gold mine in Alaska, and the Jungo gold/copper property in Nevada. *Technical Report on the Golden Zone Property, August 17, 2017, L. McGarry P.Geo & I. Trinder P.Geo, A.C.A Howe International Ltd.

Avidian is the majority owner of High Tide Resources, a private company with an option on the Labrador West iron ore property located in Newfoundland and Labrador, Canada. Avidian is focused on and committed to the development of advanced stage mineral projects throughout first world mining friendly jurisdictions using industry best practices combined with a strong social license from local communities. Further details on the Corporation and the individual projects, including the NI 43-101 Technical report on the Golden Zone property, can be found on the Corporation's website at www.avidiangold.com.

Figure 1: Cross-section Through Hole AM20-02 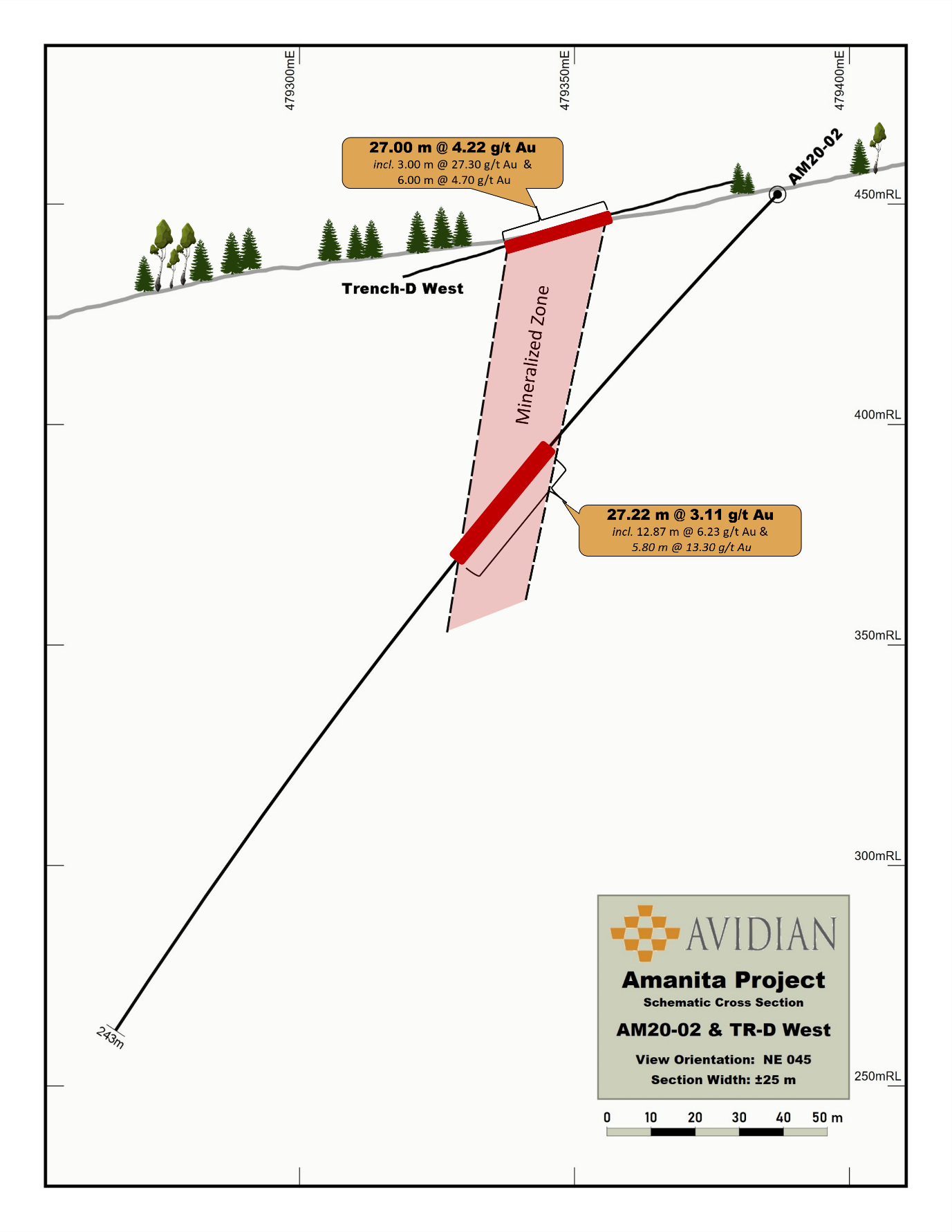 To see enhanced view of image, click the link: https://storage.googleapis.com/accesswire/media/626139/AVIDIAN-IMAGE012721.jpg