CANEX Signs Letter of Intent to Add the Excelsior Mine Property to the Gold Range Project, Including 3 Past Producing Gold Mines

CANEX Signs Letter of Intent to Add the Excelsior Mine Property to the Gold Range Project, Including 3 Past Producing Gold Mines

CALGARY, AB / ACCESSWIRE / January 13, 2021 / CANEX Metals Inc. ("CANEX" or the "Company") is pleased to announce that, through its 100% owned Arizona subsidiary CANEXCO Inc., it has signed a binding letter of intent (the "LOI") to option the Excelsior Mine Property comprised of 11 lode mining claims and 2 patented mining claims covering 3 past producing historic gold mines. The Excelsior Mine Property sits within the boundaries of the Company's Gold Range Project in Arizona.

The Excelsior Mine Property

The Excelsior Mine has seen near surface historic production on multiple levels and more recent exploitation from small open pits centered along a high-grade flat dipping quartz vein and gouge zone 0.5 to 2 metres wide. There are currently small scale gold extraction facilities set up on the patented claim covering the main workings. The flat dipping Excelsior Vein is surrounded by a halo of sheeted quartz and quartz carbonate veins hosted within metamorphic rocks and forming a 20 to 50 metre wide zone that has bulk tonnage potential. Due diligence sampling by CANEX from various locations along the main Excelsior Vein has returned gold values up to 45.4 g/t over 0.5 metres, 13.3 g/t over 0.4 metres, 6.6 g/t over 1 metre, and 3.8 g/t over 1 metre. Chip samples from the halo surrounding the main vein have returned strong gold mineralization including 1.9 g/t over 1 metre, 1.7 g/t over 1 metre, 0.7 g/t over 1 metre, and 0.5 g/t over 1.5 metres. A 0.3 metre chip sample across an 8 metre wide strongly altered and quartz veined post-metamorphic granite dike located in the hangingwall of the Excelsior Vein returned 20.9 g/t gold.

Mineralization at the Excelsior Mine is exposed for 200 metres and is then obscured under cover to the northeast and southwest. The Excelsior Mine has similar characteristics and structural setting as the recent bulk tonnage target identified by drilling at CANEX's Eldorado Zone located 2 kilometres to the west, and the two targets are interpreted to be part of the same large mineralizing system.

Dr. Shane Ebert President of the Company stated, "The historic Excelsior Mine shows excellent potential for a sizable near surface bulk tonnage target surrounding a high grade gold vein. The zone has seen sufficient historic underground and recent surface work, combined with due diligence sampling and mapping by CANEX, to be ready for drill testing without delay. The Excelsior Mine and our new Eldorado bulk tonnage discovery share similar geologic characteristics, both occur along or near the same district scale structure and contain the same style of mineralization. The zones are 2 kilometres apart with good exploration potential and known mineralized zones occurring between the targets." 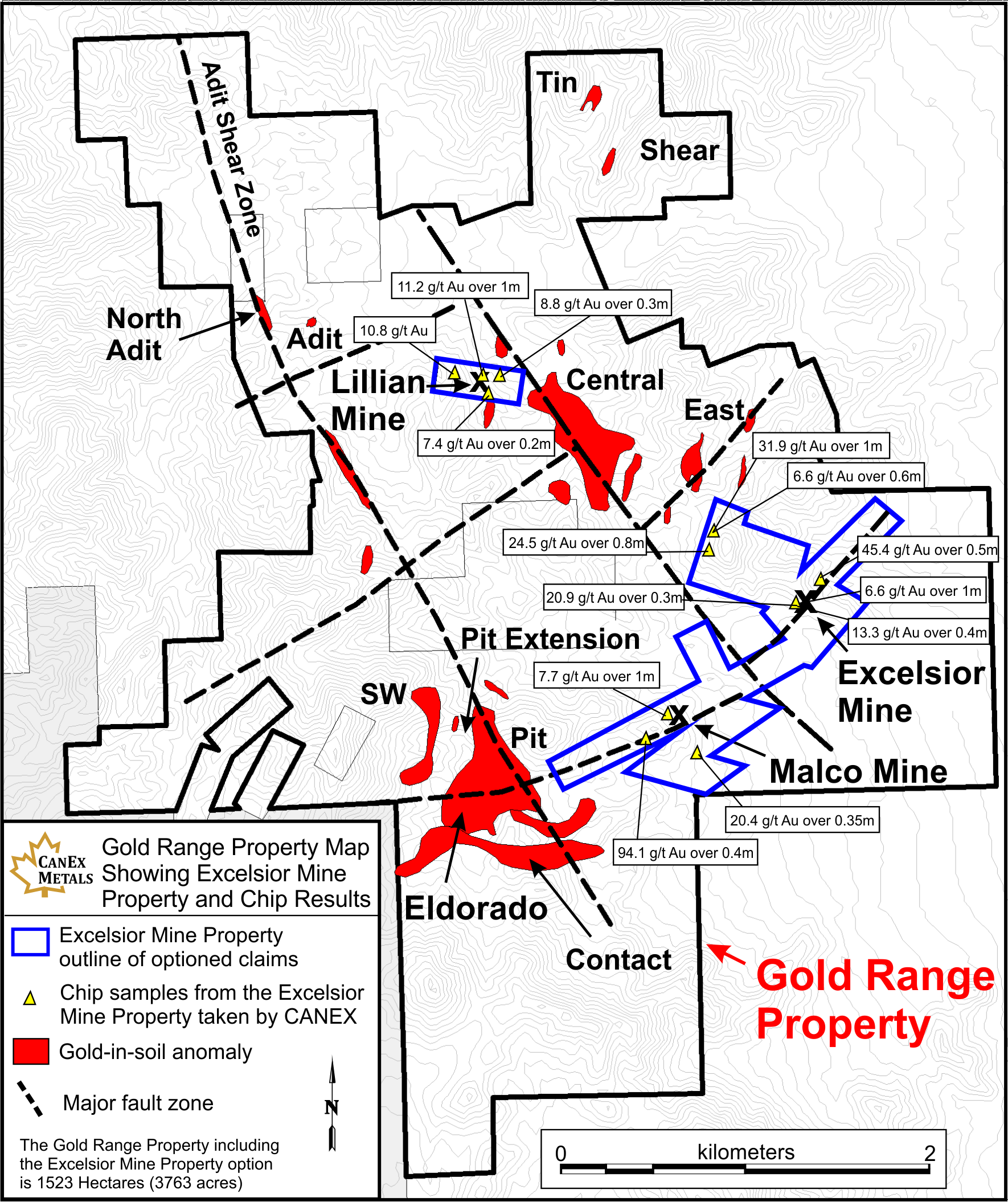 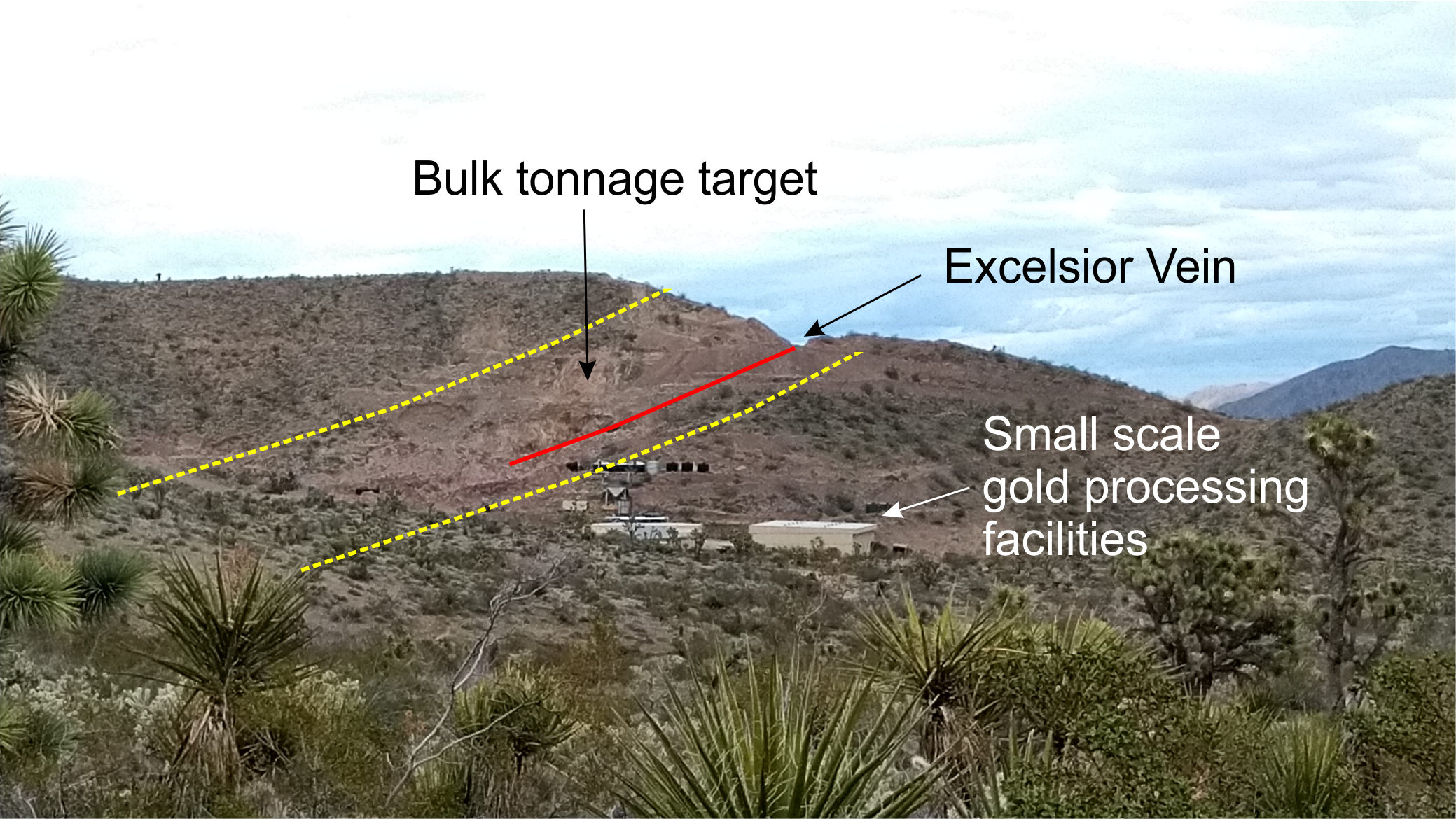 Figure 2. Photograph of the Excelsior Mine looking north showing the bulk tonnage target (between the yellow dashed lines) and Excelsior Vein.

The LOI agreement allows CANEX to earn into the Excelsior Mine Property ("the Property") from the private Vendors over 3 stages. During stage 1 CANEX can earn a 25% interest in the Property by issuing 750,000 of CANEX and spending US$500,000 on exploration. During stage 2 CANEX can earn 51% interest in the Property by issuing 1 million shares of CANEX, spending US$2,000,000 on exploration including a resource estimate, and paying a bonus payment equivalent to 1% of the gold price on recoverable gold equivalent ounces defined in the measured and indicated resource categories. Stages 1 and 2 must be completed over 2.5 years.

During stage 3 CANEX can earn a 90% interest in the Property by issuing 1,000,000 shares and spending US$2,000,000 million on exploration and development including an economic study. To complete the stage 3 earn in CANEX must make another bonus payment to the Vendors equivalent to 1.5% of the gold price on recoverable gold equivalent ounces defined in the proven and probable reserve categories. CANEX has 2 years to complete the stage 3 earn in once Stage 2 is complete. Once CANEX has earned a 90% interest in the Property the Vendors can elect to maintain their 10% ownership by contributing their 10% share to exploration and development or give up 100% ownership to CANEX and revert to a 1.5% NSR. CANEX and the Vendors have committed to completing a definitive option agreement within 30 days. The transaction is subject to TXS-V approval.

Rock samples reported here were taken by CANEX personnel and all chip samples were taken perpendicular to mineralized structure where possible. Samples were analyzed by ALS USA Inc. in Reno (which is ISO/IEC 17025 accredited). Rock samples were crushed with a 1kg pulp prepared and a 50g fire assay performed with an ACP-AES finish (code Au-ICP22). All samples with gold greater than 10 g/t were re-analyzed using a 50 g fire assay and a gravimetric finish (code Au-GRA22). Thirty-three elements were analyzed using a four-acid digestion and ICP-AES (code ME-ICP61).

About the Gold Range Property

The Gold Range Property is located in Northern Arizona within an underexplored belt containing historic load and placer gold production. CANEX has identified widespread gold mineralization within a 3 kilometre by 5 kilometre area including two gold-in-soil anomalies that are up to a kilometre in scale.

Drilling in August and September of this year identified near surface bulk tonnage gold potential at the Eldorado Zone with Hole GR20-9 returning 0.9 g/t gold over 27.3 metres including 5.9 g/t gold over 1.5 metres. Hole GR20-8 drilled from the same pad as GR20-9 returned 0.5 g/t gold over 24.4 metres starting from surface. The new discovery correlates with a strong gold in soil anomaly and sheeted quartz veinlets and stockworks within metamorphic rocks.

The Company remains focused on confirming and expanding the new discovery through continued exploration and drilling. Please visit our website at www.canexmetals.ca for additionnel information.

Dr. Shane Ebert P.Geo., is the Qualified Person for CANEX Metals and has approved the technical disclosure contained in this news release.

Except for the historical and present factual information contained herein, the matters set forth in this news release, including words such as "expects", "projects", "plans", "anticipates" and similar expressions, are forward-looking information that represents management of CANEX Metals Inc. internal projections, expectations or beliefs concerning, among other things, future operating results and various components thereof or the economic performance of CANEX. The projections, estimates and beliefs contained in such forward-looking statements necessarily involve known and unknown risks and uncertainties, which may cause CANEX's actual performance and financial results in future periods to differ materially from any projections of future performance or results expressed or implied by such forward-looking statements. These risks and uncertainties include, among other things, those described in CANEX's filings with the Canadian securities authorities. Accordingly, holders of CANEX shares and potential investors are cautioned that events or circumstances could cause results to differ materially from those predicted. CANEX disclaims any responsibility to update these forward-looking statements.