"The initial focus of the 2020 exploration was to drill test the depth extension of gold mineralization exploited in the North and South Pits at Mine Hill," states Jonathan Buick, President and CEO. "By focusing our attention on drilling within the patented claims first, we were able to launch the program quickly and assess the targets associated with the historic Bema Gold operation. Some of these holes were directed at historic high-grade sulfide veins and breccias reported from the historic Moran Tunnel beneath the South Pit. Our 2020 program of mapping, sampling and geophysics has improved our understanding of the bigger picture for Champagne - new targets are beginning to emerge all over the property."

Idaho Champion's drill program at Champagne was initiated in late August (See Press Release dated August 19, 2020). The 2020 drill holes are shown on a map relative to the patented claims and historic mines in Figure 1. The program began with RC drilling of five holes - two vertical holes (CC-01 and 02) were collared southeast of the North Pit and three angled holes (CC-03, 04, 05) were collared in the bottom of the pit. Drill hole CC-05 is of particular interest as it was drilled at a -450 angle westward to a depth of 317 metres and toward the northward projected continuation of the Last Chance Zone and breccia veins intersected in the historic Moran Tunnel.

The technical team made the decision to switch to core drilling (See press release dated September 30, 2020). The first five core holes were collared in and around the North and South Pits. The last two holes are positioned well north of the North Pit in the vicinity of the Ella breccia vein. The drill program was completed with a total of approximately 3,735 metres drilled. 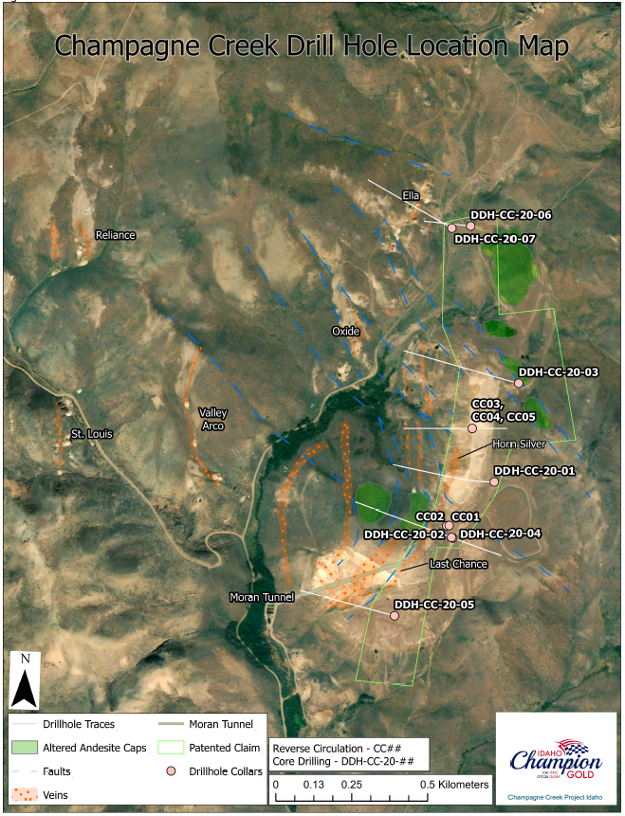 While Idaho Champion's technical team identified sulfide mineralization and extensive alteration in the core, the assay results are still pending from the lab. The Company now estimates that the first announcement of drill results will be in January 2021.

Idaho Champion's sampling crews collected a total of 594 soil samples, including three orientation survey lines and five geophysical IP Lines (see Figure 2). The orientation sampling demonstrated that soil sampling can be an effective tool for mapping gold, silver, and base metals associated with the widespread alteration and structure across the property. More soil sampling is planned for 2021. Geologists also collected 189 rock samples from outcrops, historical mines, and mine dumps. The soil and rock samples have been sent for analysis and results are expected early in Q1 2021. 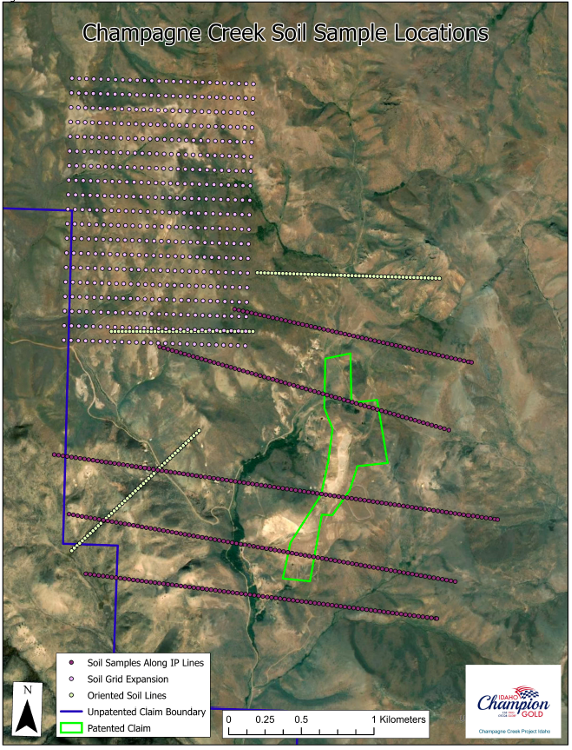 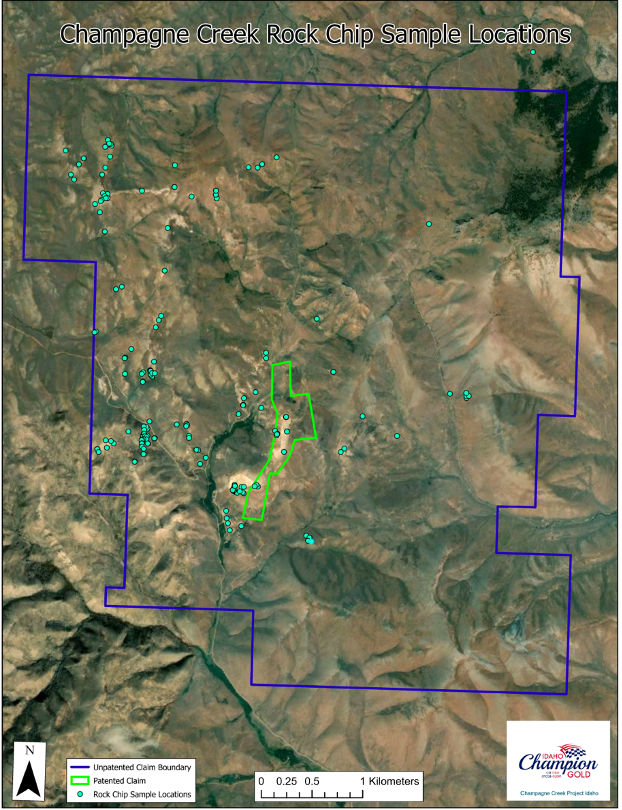 The Company acquired additional ground by staking new federal mining claims beyond the original property package controlled by Idaho Champion. The property outline is shown in Figure 3, including the patented claims that encompass the North Pit of the historic Champagne Mine. The property package now spans more than 26.98 km2 (10 mi2) and includes 329 claims. 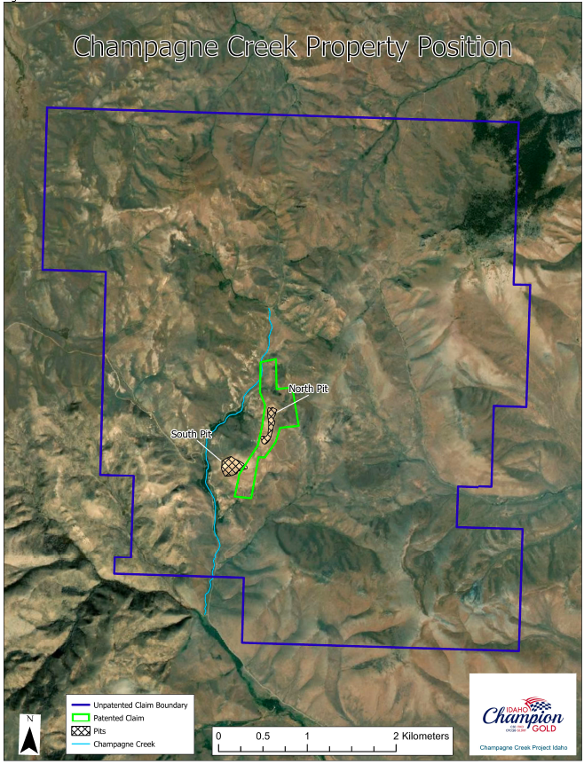 The IP survey was designed to assess the large area of surface alteration that blankets much of the property package for indications of sulfide mineralization at depth (See press release dated October 15, 2020). The survey consisted of six lines totaling 21.4 line kilometres and 200-metre dipole spacing. The results of the IP survey are being compiled and interpreted by the geophysicists. The Company intends to announce its findings when completed.

Geological mapping at a scale of 1:2,000 has been conducted over approximately 40% of the Champagne land position. The initial focus has been around the historic mining areas and other areas of evident hydrothermal alteration at surface. The technical team has concluded based on the geology and a preliminary interpretation of the geochemistry that the rocks of the Champagne Project have been subjected to several generations of mineralization related to multiple episodes of explosive volatile release from deep-seated igneous activity. Elements of the mineralizing system are clearly epithermal in nature, but there is also mineralization with a connection to higher temperature magmatic fluids.

All of the larger historic vein mines on the property, as well as the deposits exploited by open pit mining in the 1990's, were found to include hydrothermal breccias with in-filling sulfide and sulfosalt mineralization of silver-rich polymetallic character (lead-zinc). Previous workers have documented a distinct copper signature in this mineralization characterized by an abundance of unusual accessory sulfosalt minerals with antimony and bismuth, such as famotine (Cu3SbS4), aikinite (PbCuBiS3), tetrahedrite [(Cu,Fe)12Sb4S13], and stannite (Cu2FeSnS4).

The historic Moran Tunnel was documented to include polymetallic vein mineralization. There were small shipments of copper ore reported from several veins in the Moran Tunnel, but silver, lead, and zinc mineralization were noted as enveloping the central copper-rich lodes. The distribution of the polymetallic veins in the Moran Tunnel and in other prospects around the project suggests large-scale metal zoning, consistent with that seen in large scale porphyry copper systems.

Idaho Champion's geologists carefully mapped the South Pit, where mineralized structures were found to be pyritiferous vuggy silica breccia veins with anomalous gold (up to 2.67 grams per tonne) and silver (up to 5.76 grams per tonne) and weakly anomalous copper (up to 164 ppm). However, the South Pit mineralization was consistently low in lead and zinc. A few similar vuggy silica breccia outcrops are left exposed in the reclaimed North Pit. Here there is strong associated clay-pyrite alteration with alunite present as vug infillings. The principle gangue minerals are pyrite and marcasite, which occur in sub-equal proportions.

The mapping around these historic mines supports a preliminary conclusion that the Champagne mineral system included an early silver-rich polymetallic mineralizing event followed by a gold-silver high-sulfidation event. The characteristics of both the polymetallic and gold-silver veins and breccia are typical of an epithermal mineralizing system. The geochemical zoning, alteration, and overlapping styles of mineralization are indicators of a possible deep-seated porphyry copper (molybdenum) intrusion as the source of the mineralizing fluids.

The geological setting of the Champagne Project is presented in the geologic map in Figure 4. The mapping indicates that the gold, silver, and polymetallic deposits at Champagne are part of a resurgent collapsed volcanic caldera in the Challis Volcanics.

Due to backlogs at the major assay laboratories, results remain pending, including gold and multi-element analyses on soils, rocks, and drill samples. However, the preliminary interpretations of the geological mapping, sampling, and geophysics have provided a much more complete picture of the project's potential for both shallow gold/silver targets and deeper porphyry copper style mineralization. Idaho Champion will be reporting on the balance of the drill program and geophysical results once final results are in hand. 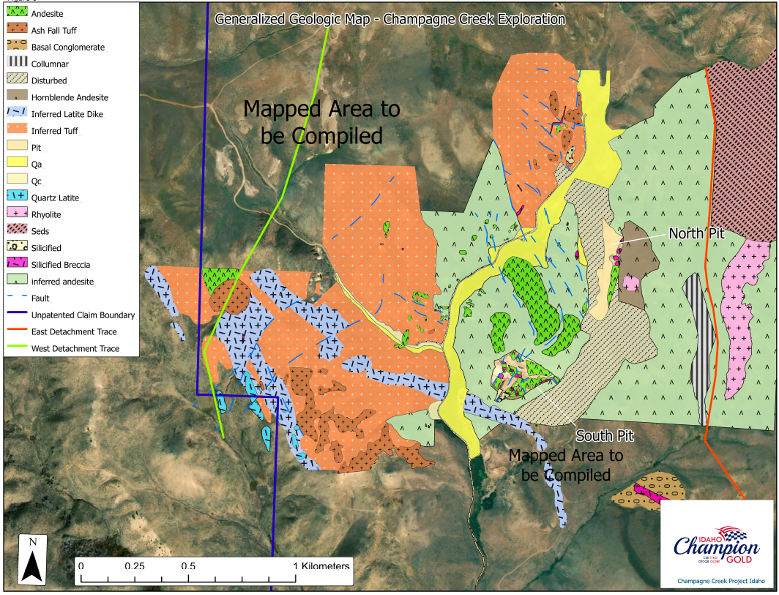 About the Champagne Project

The Champagne Mine* was operated by Bema Gold as a heap leach operation on a high sulfidation gold system that occurs in volcanic rocks. Bema Gold drilled 72 shallow reverse circulation holes on the project, which compliment drilling and trenching from other previous operators. The property has had no deep drilling or significant modern exploration since the mine closure in early 1992.

The Champagne Deposit contains epigenetic style gold and silver mineralization that occurs in strongly altered Tertiary volcanic tuffs and flows of acid to intermediate composition. Champagne has a near surface cap of gold-silver mineralization emplaced by deep-seated structures that acted as conduits for precious metal rich hydrothermal fluids. Higher grade zones in the Champagne Deposit appear to be related to such feeder zones.

* The Company cautions that the information about the past-producing mine may not be indicative of mineralization on Champion's property, and if mineralization does occur, that it will occur in sufficient quantity or grade that would result in an economic extraction scenario. The historic data were simply used to evaluate the prospective nature of the property. The Company has not yet conducted sufficient exploration to ascertain if a mineral resource is present on the property.

Idaho Champion is a discovery-focused gold exploration company that is committed to advancing its 100%-owned highly prospective mineral properties located in Idaho, United States. The Company's shares trade on the CSE under the trading symbol "ITKO", on the OTCQB under the trading symbol "GLDRF", and on the Frankfurt Stock Exchange under the symbol "1QB1". Idaho Champion is vested in Idaho with the Baner Project in Idaho County, the Champagne Project located in Butte County near Arco, and four cobalt properties in Lemhi County in the Idaho Cobalt Belt. Idaho Champion strives to be a responsible environmental steward, stakeholder and a contributing citizen to the local communities where it operates. Idaho Champion takes its social license seriously, employing local community members and service providers at its operations whenever possible.