TORONTO, ON / ACCESSWIRE / September 16, 2020 / Monterey Minerals Inc. (the "Company" or "Monterey") (CSE: MREY and FSE :2DK) is pleased provide a corporate and exploration update on activities at its wholly-owned Alicia high-grade gold and base metals project in Alicia Municipality, Philippines ("Alicia Project").

The Company mobilized its Technical Team to the project after the closing of the oversubscribed private placement (See press release dated July 28, 2020). 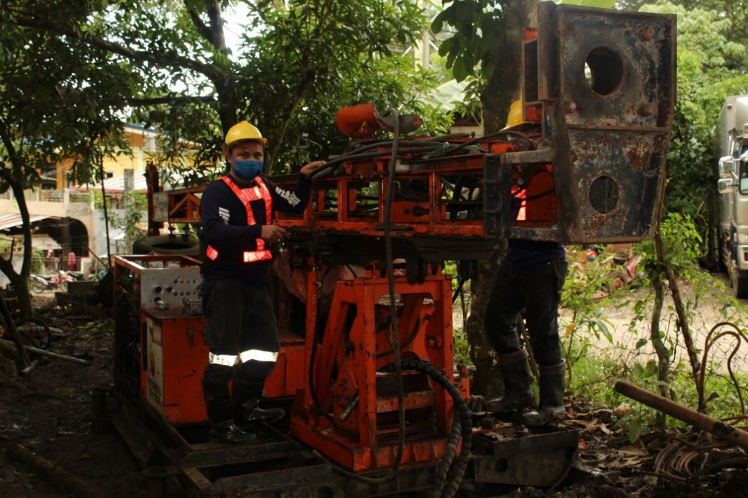 IndoDrill, a Philippines based drilling company, has been awarded the initial 3,000 metre drilling contract. Personnel have been mobilized on site and the drill rig is currently being assembled, see Figure 1. It is anticipated that drilling will commence before the end of September.

Strong Addition to our Technical Team

Mr. Tuesley will oversee exploration activities at the Alicia Project. Max is a highly experienced project manager and has spent over 25 years in grassroots, advanced mineral exploration and mine production, predominantly in gold, copper and base metals. He has been working in the Philippines for nine years, including senior management positions at the Masbate Gold Project for B2Gold Corp. and the Runruno Gold Mine for Metals Exploration Plc.

Max has also managed start up gold projects in Central Asia and porphyry copper exploration in both Mongolia and Sudan. Mr. Tuesley holds an Honour's degree in Economic Geology from James Cook University in Australia and is a member of the Australian Institute of Mining and Metallurgy.

Trenching activity has continued, with a focus on the Pamaraw, Baloy, Sandi, and Quintilla veins. Priority samples are now being prepared for dispatch to the Intertek laboratory in Manila. Results are expected before the end of October. Further fieldwork, including sampling, will be ongoing in advance of the initiation of drilling.

The Company is also pleased to announce that Emma Jadoc is remaining as Exploration Manager at Alicia.

"With the addition of Max, we are able to explore the potential of how large the area of mineralization is at the Alicia Project. We would also like to thank our team members Emma Jadoc and Liza Neido for working tirelessly for the Alicia Project despite the COVID-related restrictions that are in place", stated James Macintosh, President and CEO.

The technical information in this press release has been reviewed and approved by Martin Dormer, a consultant to the Company, who is a Qualified Person as defined by NI 43-101. Martin is a member of the Australian Institute of Mining and Metallurgy (AusIMM), the Australian Institute of Geoscientists (AIG). He is a West Australian geologist with over 22 years' experience and sufficient experience of relevance to the styles of mineralization and types of deposits under consideration to qualify as a Competent Person as defined by the 2012 Edition of the Joint Ore Reserves Committee (JORC) Australian Code for Reporting of Exploration Results, Mineral Resources, and Ore Reserves.

The Company owns 100% of the Alicia Project in the Alicia Municipality of the Philippines. The Alicia Project is a system of multiple, high-grade gold and silver veins with base metals over a strike length of greater than ten kilometres. The Company also owns the Cobalt Mountain Property (the "Property") in the Omineca Mining Division of British Columbia near the town of Smithers. The Company's NI 43-101 technical report, available on SEDAR, notes historic sampling on the Property that returned mineralized showings of gold, silver, copper, zinc and cobalt. The Company also owns 877 sq. km. of prospective Pilbara Basin tenements on the eastern flank of the Pilbara Basin in Western Australia, including a property that abuts Pacton Gold's tenement where gold-bearing conglomerates were identified.