TORONTO, ON / ACCESSWIRE / September 3, 2020 / Anaconda Mining Inc. ("Anaconda" or the "Company") (TSX:ANX)(OTCQX:ANXGF) is pleased to announce initial drill results from the 5,500-metre drill program ("Drill Program") announced on June 10, 2020, at its 100%-owned Goldboro Gold Project ("Goldboro" or the "Project") in Nova Scotia, Canada. The Drill Program was designed to convert priority Inferred Mineral Resources, considered proximal to planned development in the ongoing feasibility study, into Indicated Mineral Resources. To date, the Drill Program has included 4,860 metres of diamond drilling in 20 holes with assays returned for 10 holes, including holes BR-20-105 to BR-20-114 (Exhibit A). The Drill Program has intersected 13 mineralized zones including 11 with visible gold occurrences. Critically, the mineralized zones were consistently intersected near the area projected by the geological model.

Selected composited highlights from the Drill Program include:

A table of selected composited intersections from the Drill Program are shown in Table 1 below.

Selected composited highlights from historic* drilling in the immediate areas of the Drill Program include:

"This drill program was initiated as we recognized a significant opportunity to optimize the value of the Goldboro Gold Project and directly impact and potentially increase the overall value of the Project and other key economic metrics. The drill results indicate the presence of mineralization and grade where predicted by the geological model, providing the confidence to upgrade these portions of the deposit. Based on the success of the drill results to date, and in response to other near-term opportunities identified by the on-going feasibility study, we have initiated a further 9,500 metres of drilling to bring the drill program to 15,000 metres. The goal of the expanded drill program remains the same - to capitalize on identified opportunities to upgrade significant resources proximal to planned development, but with emphasis on near surface, open pit resources. These drill results and those anticipated in the next couple of months will be incorporated into an updated mineral resource and used for the final mine design for the feasibility study to be released in Q4 of 2020."

The Drill Program, including the expanded drilling, is funded using existing flow through funds, but has also benefited from a grant received from the Government of Nova Scotia through a Mineral Resources Development Fund, shared funding exploration grant MRDF-2020-SF-035.

The Company has critically considered logistical matters given the ongoing COVID-19 pandemic, to ensure that this Drill Program and any other programs are executed in a way that ensures the absolute health and safety of our personnel, contractors, and the communities where we operate.

All samples and the resultant composites referred to in this release are collected using QA/QC protocols including the regular insertion of standards and blanks within the sample batch for analysis and check assays of select samples. All samples quoted in this release were analyzed at Eastern Analytical Ltd. in Springdale, NL, for Au by fire assay (30 g) with an AA finish.

Samples analyzing greater than 0.5 g/t Au via 30 g fire assay were re-analyzed at Eastern via total pulp metallic. For the total pulp metallic analysis, the entire sample is crushed to -10mesh and pulverized to 95% -150mesh. The total sample is then weighed and screened to 150mesh. The +150-mesh fraction is fire assayed for Au, and a 30 g subsample of the -150mesh fraction analyzed via fire assay. A weighted average gold grade is calculated for the final reportable gold grade. Anaconda considers total pulp metallic analysis to be more representative than 30 g fire assay in coarse gold systems such as the Goldboro Deposit.

Reported mineralized intervals are measured from core lengths. Intervals are estimated to be approximately 80-100% of true widths.

* Historic drill core and assay certificates have been reviewed and validated by the qualified person and are appropriate for use in this press release.

A version of this press release will be available in French on Anaconda's website (www.anacondamining.com) in two to three business days. 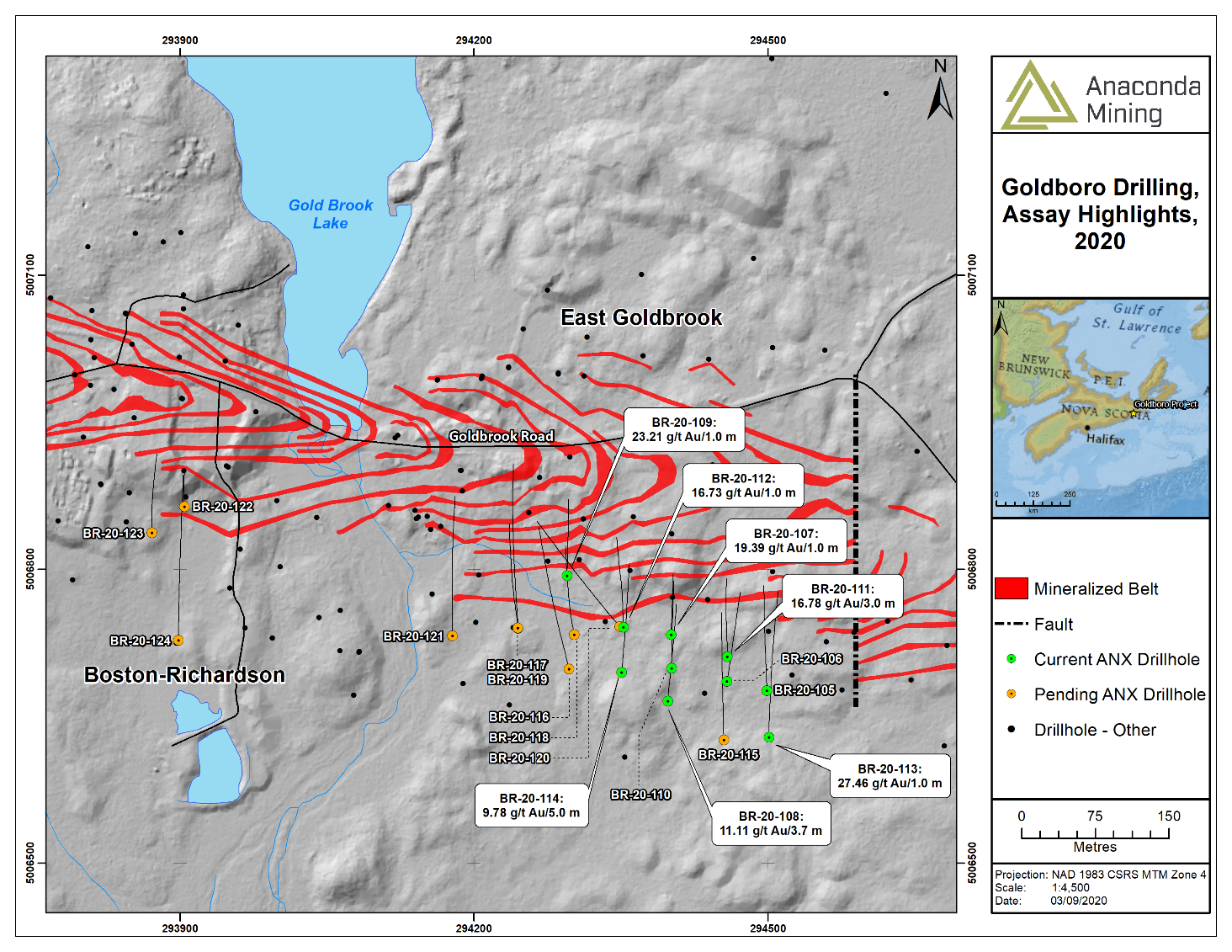 Exhibit A: A map showing the location of drill holes and selected composited highlights.