NEW YORK, NY / ACCESSWIRE / August 24, 2020 / Exploring The Block will be broadcasting on Fox Business Network 1030 pm PST tonight featuring fetch.ai with CEO Humayun Sheikh on their second interview in 6 Part series. We also have BlockQuake with CEO Antonio Brasse, giving us an update. Fetch.ai will be filming their next interview within the next few weeks, dates and times TBA. 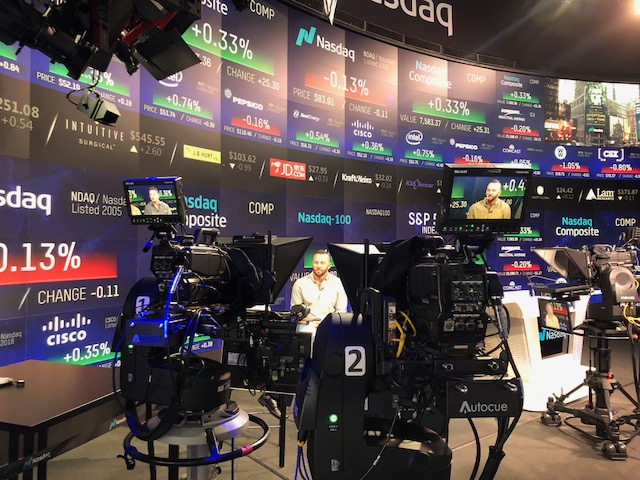 We have a special interview with Chris Bolet Senior Developer and Herman Schoenfeld, CEO of Pascal, on their special tech.

New to the Street, "Exploring The Block " will be broadcasting on Bloomberg Saturday, August 29th at  6 pm EST. Check us out and the companies appearing in  Bloombergs T.V. Guide.

We are doing monthly  " New To The Street"  segments and welcome companies with new products and services to inquire. The company has to be special and be T.V. ready regarding infrastructure and the ability to service massive orders and attention. Companies who are ready for this challenge, please contact our CEO Vince Caruso direct via email  [email protected]

FMW Media Corp. operates one of the longest-running U.S and International sponsored programming T.V. brands "NewToTheStreet," and its blockchain show "Exploring The Block." Since 2009, these brands run shows across three major U.S. Television networks.  These TV platforms reach over 540 million homes both in the US and international markets.

"Fetch.ai is at the forefront of accelerating research and deployment of emerging technologies, including blockchain and AI. Its solutions are designed for people, organizations, and IoT. The project has created an Open Economic Framework (OEF) that serves as a decentralized search and a value exchange platform for various autonomous economic agents. Supported by a scalable smart ledger, Fetch.ai has digital intelligence at its heart, enabling it to deliver actionable predictions and instant trust information to billions of smart devices."

Using the power of blockchain to unlock the global digital economy for millions of people in the developing world.

The WaykiChain is focused on developing its own technology, bottom public chain layer and as well corresponding to that an ecosystem that will foster technology research and development, as well as project operation.

The independent research and development of the third generation of blockchain business reached the leading level in the industry, with high-performance transaction processing capabilities (TPS 3300), efficient mechanism of consensus (DPoS + pBFT), robust and smart engine (Lua + WASM) contract, plus the blockchain decentralized control ability. WaykiChain will provide expertise in critical areas of vertical industry with infrastructure services and industry solutions.

At present, with the team's continuous investment in research and development and the active participation of the community of developers and users, the base of WaykiChain has been continuously upgraded and optimized. One of the critical financial roots of blockchain developed by WaykiChain, stable coin WUSD (built on the bottom layer of the public chain), is also enhancing the potential synergy of decentralized business.

Pascal (PASC)  Pascal is a next-generation cryptocurrency that solves many of the limitations of existing cryptocurrencies. Its primary focus is on solving the “scalability issue.” Stress-test results of the testnet 4.1 codebase show the mainnet capacity can achieve 1,600 transactions per second.

Secondly, Pascal solves the long-term blockchain “storage issue” by introducing deletable blockchain technology. This technology allows Pascal nodes to securely delete the blockchain beyond the last 100 blocks. By storing the flow of transactions rather than the infinite history, the Pascal network is the first (and only known) cryptocurrency that can theoretically run for infinite time at maximum throughput while requiring only constant storage. In this manner, Pascal achieves “infinite scalability”.

The company was formed in early 2018 to address the need for trust and transparency in the blockchain and cryptocurrency communities through the development of a centralized cryptocurrency trading exchange platform.

Through his experience in cryptocurrency trading, Antonio Brasse found there was a void within the existing landscape of cryptocurrency trading platforms. This void is relative to performance, security, transparency, and trust – as compared to operations within traditional financial markets. In talking with two of his friends and fellow crypto traders, Antonio discovered they had similar observations. Drawing upon their collective years of experience in financial services, the team believed they could change this landscape for the better through significant and rapid disruption, “creating seismic shifts.” That was the genesis of BlockQuake™.

The company was formed in early 2018 to address the need for trust and transparency in the blockchain and cryptocurrency communities through the development of a centralized cryptocurrency trading exchange platform.