SUDBURY, ON / ACCESSWIRE / August 18, 2020 / Northern Superior Resources ("Northern Superior" or the "Company")(TSXV:SUP)(OCTQB:NSUPF) is pleased to announce that the Company has planned and is preparing to begin a core drill program on its 100% owned Lac Surprise gold property, located in west central Québec. This property is large, consisting of 274 claims or 15,178.5 hectares.

The purpose of this drill program is to test three possible extensions of the Nelligan gold deposit (see IAMGOLD/Vanstar press releases, October 22, 2019) onto the Lac Surprise property. This program will consist of two phases of core drilling. Phase I, approximately 20 drill holes, or 6,000 meters ("m") of core drilling; and Phase II, which will be based on results from Phase I. Both phases of drilling are fully funded through the $2 million of Québec charitable flow raised in June (see Northern Superior press release, June 3, 2020).

In the fall of 2019, Northern Superior confirmed the first extension of the Renard Gold trend of the Nelligan gold deposit onto the northeastern part of the Lac Surprise property (see Northern Superior press release, October 23, 2019). This discovery was based on the intersection of the related gold-bearing hydrothermal system highlighted by an intersection of 1.54 g/t gold over 15.15m. The 2019 program defined a 750m extension of this system onto the Lac Surprise property, following the southern axis of an F4 fold (originally called the Ѐpervier Zone, see Figure 1). This extension was originally targeted based on the projection of the Renard gold zone, through the most westerly IAMGOLD/Vanstar collar associated with this gold zone at the time, drill collar NE-17-61.

Reports from the 2020 IAMGOLD/Vanstar core drill program on the Nelligan property provide further confirmation for the westward extension of mineralization and associated alteration from the Nelligan gold deposit, now defined only 1.2 kilometers ("km") away from the Lac Surprise property boundary. Confirmation of IAMGOLD's assertion that the gold-bearing Nelligan system remains open along strike to the west outside of the current modeled resource (seeIAMGOLD press release, August 11, 2020 - IAMGOLD Reports Remaining Assay Results and Extends the Renard System to the West at the Nelligan Gold Project, Quebec; Summer Drilling Program Underway) is clearly supported from Northern Superior's 2019 core drill program.

At the conclusion of the 2019 program, it was hypothesized that the system identified with Extension I wrapped around and along the northern limb of the F4 fold. Credibility for this hypothesis was recently provided through press release from IAMGOLD (see IAMGOLD press release June 18, 2020 - IAMGOLD Extends Mineralization at the Nelligan Gold Project, Quebec with Initial Assay Results from Its 2020 Winter Drilling) and publication of the Nelligan gold deposit NI 43-101 report (NI 43-101 Technical Report and Initial Mineral Resource Estimate for the Nelligan Project, Québec, Canada, Alain Carrier et al., December 4, 2019). From the press release, hole NE-17-61 intersected mineralization 200-300m farther north than the drill collar location, indicating that the alignment of the Renard Gold Zone appears to connect directly with the northern limb of the F4 fold (see Figure 1).

Geophysically, the Renard Gold trend occurs within a "magnetic low" buttressed to the north and south by distinct west to east striking magnetic high "ridges." This signature clearly extends west onto the Lac Surprise property by at least 3km (see Figure 2). This geophysical signature on the Lac Surprise property has never been drill tested. At the western terminus of this signature there exists a number of gold showings highlighted by the Black Phoenix showing: a quartz-tourmaline sample that assayed 19.9g/t gold (see Figure 3). Geophysics suggests several northeast- southwest faults.

Dr. T.F. Morris, President and CEO states: "We are very encouraged by the opportunity presented at Lac Surprise and the progress made just west of our project at IAMGOLD /Vanstar's Nelligan Joint Venture. The subsequent analysis of data derived from the last exploration program at Lac Surprise not only further supports and re-enforces the discovery of the gold-bearing hydrothermal system extension associated with Nelligan onto Lac Surprise, but the recognition for potentially two additional extensions with significant cumulative strike. This emphasizes the urgency and importance of commencing this core drill program now. We look forward to sharing the progress and results of this core drill program going forward."

Thomas F. Morris (PhD., FGAC, P.Geo., ICD.D.) is a Qualified Person ("QP") within the meaning of National Instrument 43-101. Dr. Morris has reviewed, and approved information disclosed in this press release.

Northern Superior is a reporting issuer in British Columbia, Alberta, Ontario and Québec, and trades on the TSX Venture Exchange under the symbol SUP, and the OTCQB Venture Market under the symbol NSUPF. 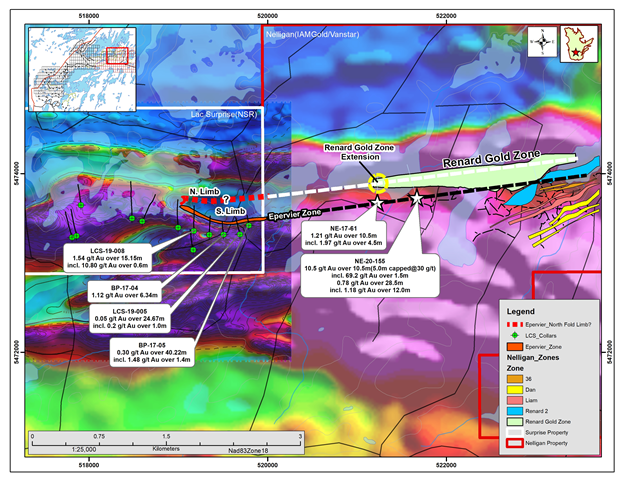 Figure 1. Initial discovery of the westward extension of the Nelligan gold-bearing hydrothermal system onto Lac Surprise, Extension I- Renard Zone West, Southern Limb (originally described as the Ѐpervier Zone). Northern Superior's 2019 discovery was based on extending the Renard Gold Zone, in part, through the collar location of IAMGOLD/Vanstar's NE-17-61 drill collar location. 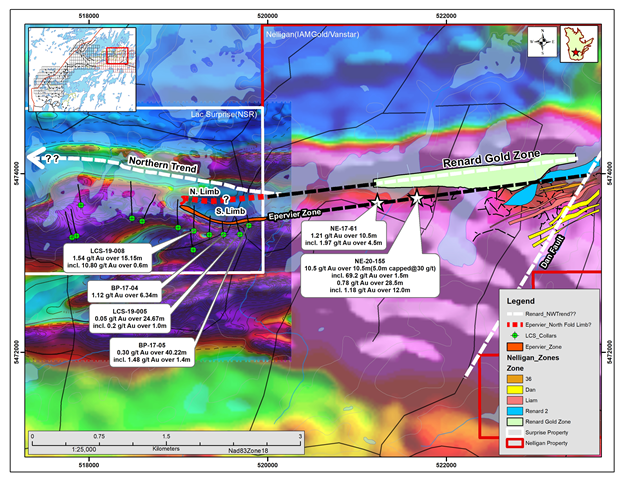 Figure 2. Further interpretation of the geophysics associated with the Renard Gold Zone suggests a third extension of the associated system a further 3kms across the northern part of the Lac Surprise property (white dashed line). 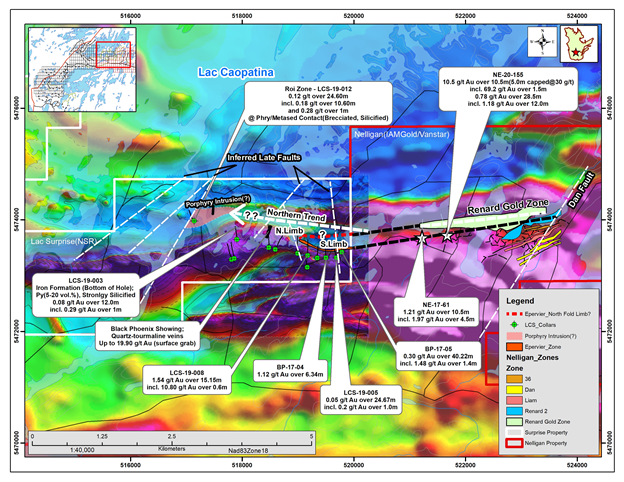 Figure 3. This proposed 3km extension of the gold-bearing hydrothermal system associated with the Renard gold zone (Extension III- Northern Trend) is coincident with a number of gold showings including the Black Phoenix gold showing from which a quartz-tourmaline grab sample was collected that assayed 19.9 g/t gold.