In June 2020, Delta geologists with the help of a team of consultants from Laurentia Exploration and local prospectors, carried-out a bedrock mapping and sampling program coupled with boulder tracing at the Delta-2 property in Chibougamau, Quebec. Part of the program covered the site of the Snowfall Gold occurrence, a discovery made through prospecting in November 2019 (see Delta press release November 26, 2019). Two additional mineralized outcrops have been located at the site and assay results are as follows:

Mineralized samples have now been discovered over a north-south direction of 184 metres and 131 metres in the east-west direction. Also new at Snowfall are the high copper and silver values.

In addition to sampled outcrops, two mineralized boulders of quartz vein with trace disseminated chalcopyrite have also been discovered at the site; pointing to a nearby source to the north-northeast of the gold occurrence. Assays values of these boulders are as follows:

"This is a totally new discovery in a well-known mining camp. The target area surrounding the Snowfall Gold-Copper occurrence covers an area well over 5 square kilometers and not one historical drill hole is reported in the area."

" We have a tremendous opportunity to make a significant discovery in a mature camp where multiple deposits already exist. Our team of geologists is extremely excited and motivated by this new discovery. We're looking forward to receiving the results of our channel sampling shortly."

As reported on July 9th, 2020, Delta is currently carrying out a mechanical trenching program at Delta-2, which includes the Snowfall Gold occurrence. Mechanical trenching at Snowfall uncovered strong and pervasive alteration zones hosting different mineralized quartz veins at the contact of the La Dauversière Pluton. Three (3) trenches were completed spaced by more than 150 meters from each other. Channel sampling work has been completed and assays are pending.

Geochemical analyses were performed by Laboratoire Expert Inc, Rouyn-Noranda. Gold geochemical analyses were performed by fire assay with finish by Atomic Absorption. For samples grading over 3 g/t Au, the sample was re-analyzed by fire assay with gravimetric finish. Silver and base metal assays were analyzed by aqua regia (ICP).

The quality assurance and quality control protocol include insertion of blank or standard in addition to the regular insertion of blank, duplicate, and standard samples accredited by Laboratoire Expert during the analytical process.

Michel Chapdelaine, P.Geo. and Vice-President of Exploration at Delta Resources Limited is a Qualified Persons as defined by NI-43-101 and is responsible for the technical information presented in this press release. 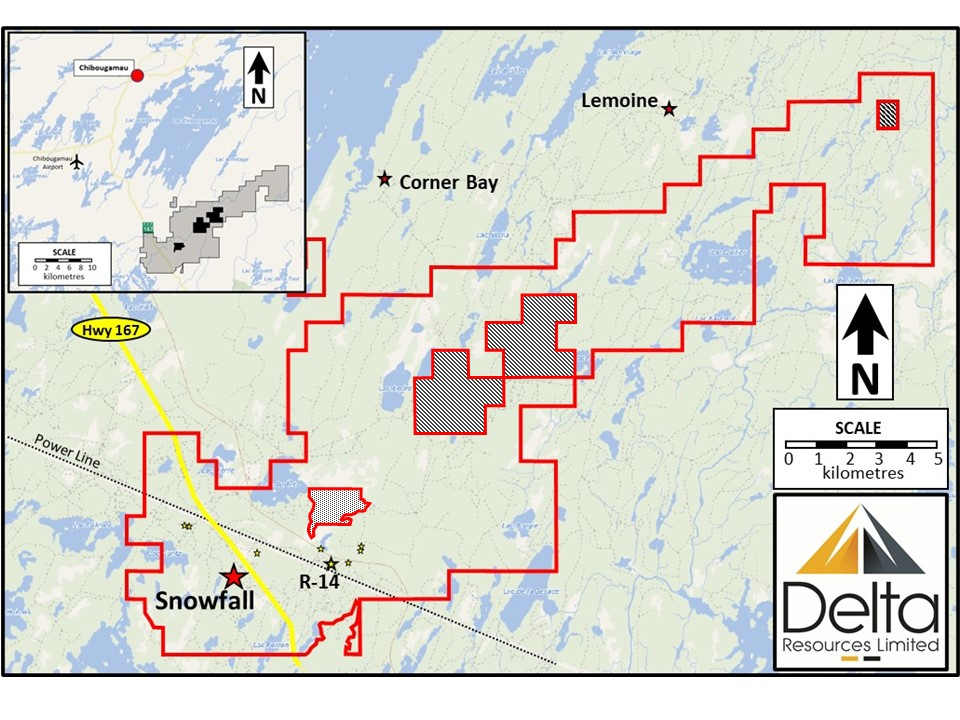 Delta Resources Limited is a Canadian mineral exploration company focused on growing shareholder value through the acquisition of high-potential gold and base-metal projects in Canada, exploring these projects with state-of-the-art methods, and potentially developing these projects into mines.

Delta is currently exploring its Eureka Gold Discovery in the Thunder Bay area (Delta-1) and its Delta-2 Gold-Polymetallic Property in the Chibougamau Mining District of Quebec.

The Company continues to focus on building upon its strong portfolio of mineral exploration properties with a high potential for economic discoveries in Canada.

ON BEHALF OF THE BOARD OF DELTA RESOURCES LIMITED.

Some statements contained in this news release are " "forward looking information" within the meaning of Canadian securities laws. Forward looking information include, but are not limited to, statements regarding the use of proceeds of the non-brokered private placement and payment of the debt settlements. Generally, forward-looking information can be identified by the use of forward-looking terminology such as "plans", "expects", "is expected", "budget", "scheduled", "estimates", "forecasts", "intends", "anticipates", "believes" or variations of such words and phrases (including negative or grammatical variations) or statements that certain actions, events or results "may", "could", "would", "might" or "will be taken", "occur" or "be achieved" or the negative connotation thereof. Investors are cautioned that forward-looking information is inherently uncertain and involves risks, assumptions and uncertainties that could cause actual facts to differ materially. There can be no assurance that future developments affecting the Company will be those anticipated by management. The forward-looking information contained in this press release constitutes management's current estimates, as of the date of this press release, with respect to the matters covered thereby. We expect that these estimates will change as new information is received. While we may elect to update these estimates at any time, we do not undertake to update any estimate at any particular time or in response to any particular event.