"The Buckingham Vein is a high grade, near surface, steeply dipping vein that remains open at depth and to the southeast," stated Thomas Ullrich, CEO of Aston Bay. "Together with the broad zones of lower grade disseminated gold mineralization, we are developing a very attractive and increasingly compelling gold exploration story here at the Buckingham Property in Virginia. We look forward to build on this with the assay results from our ongoing Phase 2 drill program. We clearly have additional exploration potential along strike to the southeast and down-dip with the Buckingham Vein, as well as prospective areas for broader zones of lower grade disseminated gold mineralization to the west and west-northwest of the vein. IP geophysics and additional step-out drilling are the next steps at Buckingham for the second half of the year."

Phase 2 of the drilling program at the property is currently underway (see June 26, 2020 Aston Bay press release), with six drill holes completed to date. Gold-bearing quartz vein material was intercepted in all four of the step-out drill holes located up to 115 m along strike from the Phase 1 drilling of the Buckingham Vein. Samples from the initial three drill holes, two drill holes targeting the vein and one drill hole targeting disseminated mineralization, have been shipped to the laboratory for analysis by standard fire assay techniques which will include metallic screen assaying of selected intervals with visible alteration and mineralization (including visible gold). Results are anticipated in the coming weeks. Drilling of the seventh and final drill hole in the Phase 2 program is underway and anticipated to be completed soon. The Company will provide an update on the Phase 2 program next week.

About the Buckingham Main Zone

The gold-bearing system is hosted within a package of likely Cambrian-age sediments, including greywackes with minor quartz-arenites (phyllite, schist and quartzites), within the Appalachian orogenic belt. This region is the site of the historically prolific Pyrite Belt which hosted a reported 250 gold mines that were in production prior to the California gold rush of 1849 but has seen little recent mineral exploration. Gold production has also occurred to the south in the Carolina Slate Belt, notably at OceanaGold's Haile Mine located in South Carolina with commercial production commencing in 2017 and slated to produce up to 150,000 ounces of gold per year.

Samples from the Company's 2020 Buckingham drill program were shipped for analysis at the ALS Laboratory in Vancouver, BC. A secure chain of custody was maintained, and the program included a comprehensive QAQC program, which did not identify any analytical issues. 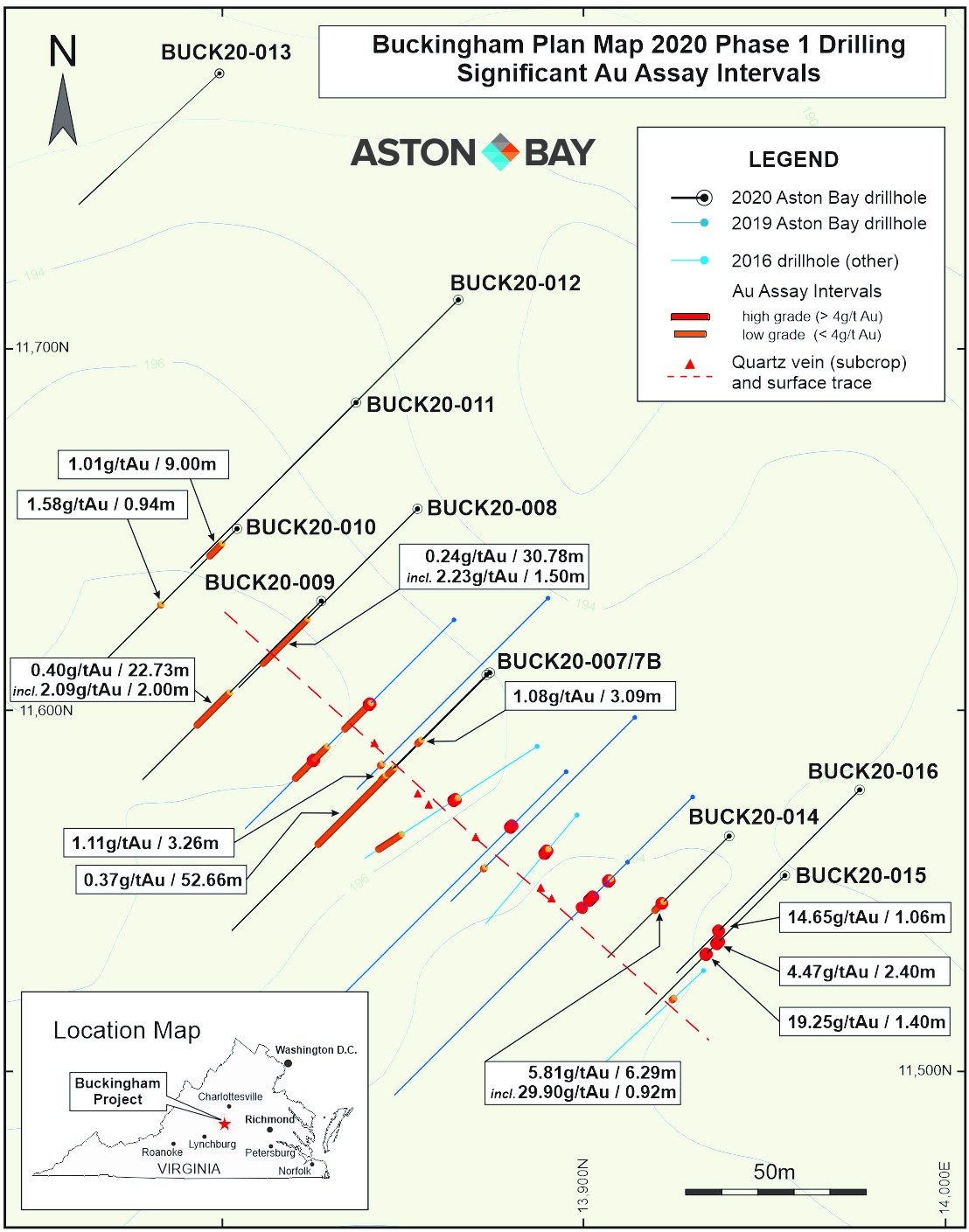 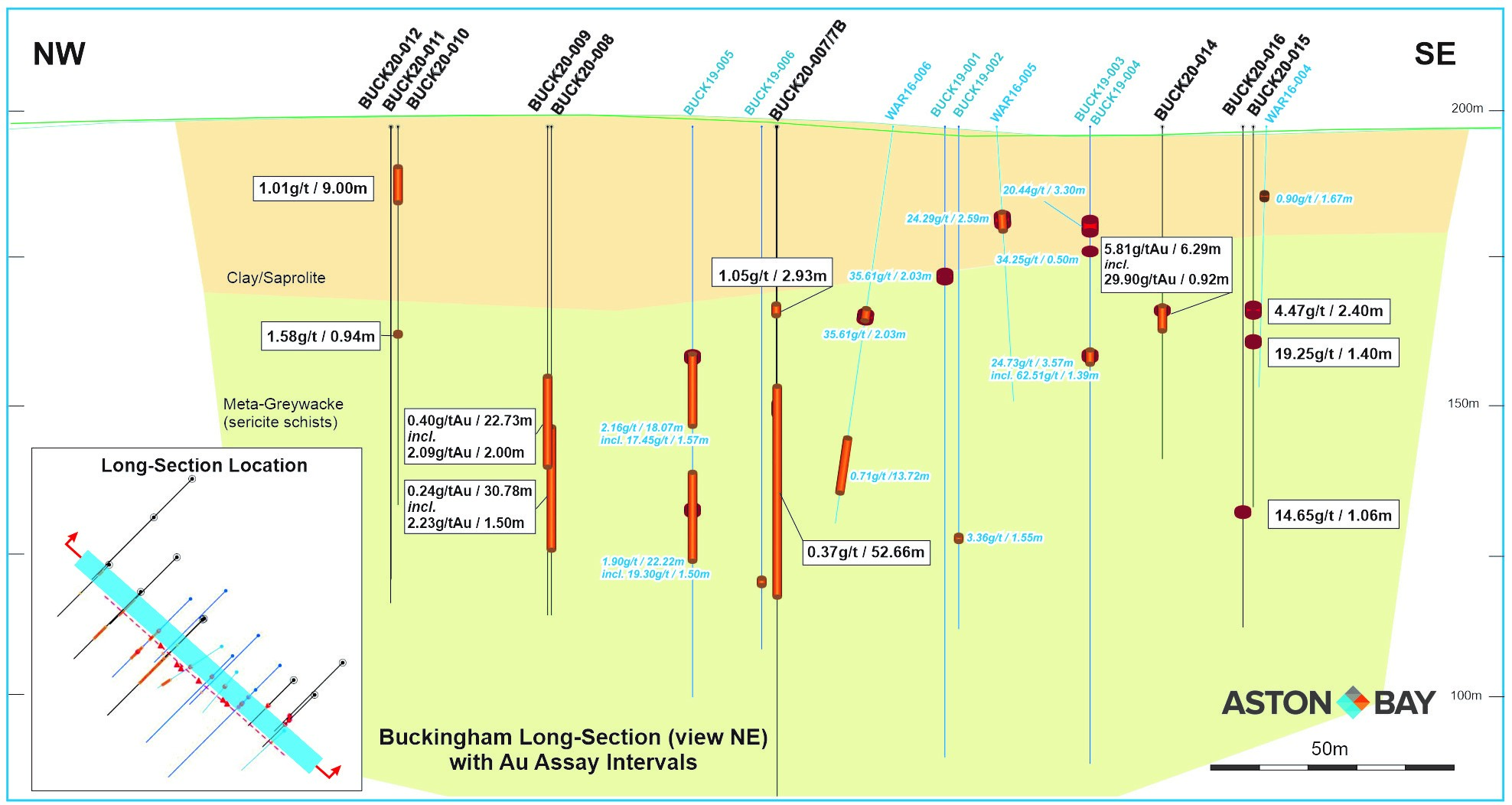 Aston Bay is a publicly traded mineral exploration company exploring for gold and base metal deposits in Virginia, USA, and Nunavut, Canada. The Company is led by CEO Thomas Ullrich with exploration in Virginia directed by the Company's advisor, Don Taylor, the 2018 Thayer Lindsley Award winner for his discovery of the Taylor Pb-Zn-Ag Deposit in Arizona.

The Company has acquired the exclusive rights to an integrated dataset over certain prospective private lands and has signed agreements with timber and land companies which grants the company the option to lease the mineral rights to 11,065 acres of land located in central Virginia. These lands are located within a gold-copper-lead-zinc mineralized belt prospective for Carolina slate belt gold deposits and Virginia gold-pyrite belt deposits, as well as sedimentary VMS, exhalative (SEDEX) and Broken Hill (BHT) type base metal deposits. Don Taylor, who led the predecessor company to Blue Ridge and assembled the dataset, has joined the Company's Advisory Board and will be directing the Company's exploration activities for the Blue Ridge Project. The Company is actively exploring the Buckingham Gold Project in Virginia and is in advanced stages of negotiation on other lands in the area.

The Company is also 100% owner of the Aston Bay Property located on western Somerset Island, Nunavut, which neighbours Teck's profitable, past-producing Polaris (Pb-Zn) Mine just 200km to the north. The Aston Bay Property hosts the Storm Copper Project and the Seal Zinc Deposit with drill-confirmed presence of sediment-hosted copper and zinc mineralization.