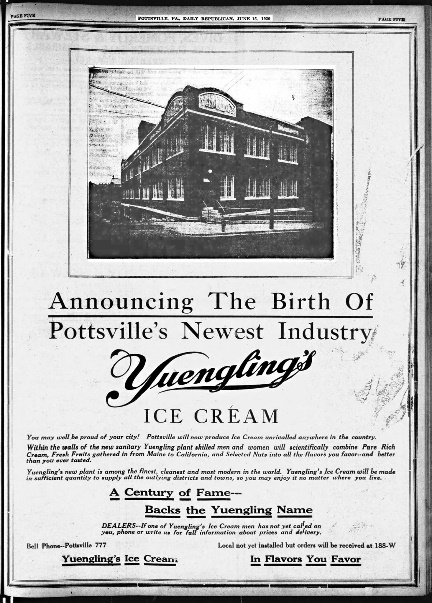 Due to the start of Prohibition in 1920, Frank Yuengling, the owner of the brewery, started Yuengling's Ice Cream. In 1935, once Prohibition was repealed, Frank spun off the company and turned the ice cream business over to his eldest son, Frederick Sr. Frederic Sr. grew sales and opened several ice cream shops during his tenure. In 1963, Frederic Sr. turned the business over to his son, Frederick Jr. (Fritz). In 1985, Fritz wanted to retire but all of his children already had careers and did not want to take over business. So, the Yuengling family made the difficult decision to stop production.

The business never really went away, though, as people talked about the ice cream for years. And, with the explosive growth of the Yuengling Brewery, people were constantly reminded of the brand.

In late 2012, David Yuengling and Rob Bohorad met to discuss the ice cream's relaunch. After a year of planning, the ice cream was back on shelves in January, 2014. Demand was high and the company grew fast. Unfortunately, the company experienced severe growing pains and eventually had to contract. With a plan in place to grow again, Yuengling's agreed to be acquired by Aureus in June, 2019. While Yuengling's start with Aureus has been slower than anticipated, Aureus still has high expectations for Yuengling's. "With 100 years behind the brand, we are very excited about the possibilities in the next 100 years, said Everett Dickson, President of Aureus, Inc.

Separately, Yuengling's is working on several toppings to complement its line of super-premium ice cream. One example is a rich chocolate fudge. Yuengling's will continue to use only the finest ingredients and natural flavors in the creation of these wonderfully new products. 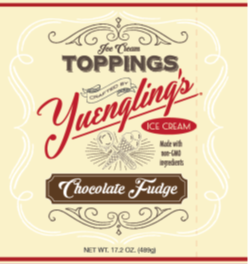 Management and ownership recently changed hands. The new focus is on acquiring specific assets in and related to the food industry, with a focus on ice cream. Aureus owns the assets and trademarks of the Yuengling's Ice Cream brand, and the exclusive right to market and sell the products of the brand. The goal of Aureus in the operation to consolidate all factors that are positive for the Yuengling's brand into a synergistic success for Aureus shareholders as well as the next generation of Yuengling's consumers.

Developed by American businessman, Frank D. Yuengling, as a dairy business to help support the Yuengling family brewery during Prohibition (1920-1933), Yuengling's Ice Cream has a strong tradition of making exceptional super-premium ice cream products in central Pennsylvania. David Yuengling and Rob Bohorad revived the brand in 2014 and an American classic was reborn. The fan-favorite brand continues advancing its legacy and its renowned dairy quality, by using locally sourced dairy ingredients that contain no added hormones. Yuengling's Ice Cream is a super-premium ice cream, which means it has a butterfat content of 14% or greater. In addition to having high butterfat, Yuengling's also has low overrun (or a lower amount of air). This makes the ice cream less whipped and much more dense. Yuengling's also is constantly working to keep its product as "clean" as possible, by using as few ingredients as necessary, and those that are used are of a very high quality. The brands Yuengling's is most similar to are Häagen-Dazs and Ben & Jerry's.

The Yuengling's Ice Cream Corporation, as it has been since 1935, is a stand alone, and separately owned and operated company from D. G. Yuengling and Sons, Inc. Brewery

This communication contains statements that may constitute "forward-looking statements" within the meaning of the Securities Act of 1933 and the Securities Exchange Act of 1934, as amended by the Private Securities Litigation Reform Act of 1995. Those statements include statements regarding the intent, belief or current expectations of US Highland, Inc and members of its management as well as the assumptions on which such statements are based.

Prospective investors are cautioned that any such forward-looking statements are not guarantees of future performance and involve risks and uncertainties and that actual results may differ materially from those contemplated by such forward-looking statements. Important factors currently known to management that could cause actual results to differ materially from those in forward-statements include fluctuation of operating results, the ability to compete successfully, and the ability to complete before-mentioned transactions.

The Company undertakes no obligation to update or revise forward-looking statements to reflect changed assumptions, the occurrence of unanticipated events or changes to future operating results.