WIMI can flexibly develop creative and attractive theme rooms according to the operation characteristics of the restaurant to meet the different needs of guests. When guests enter the room, they can quickly forget the world outside the room by looking at the beautiful projection screen, as if they were in the ocean, the stars, the mountains, while enjoying healthy food, while enjoying a leisurely stroll, get a complete relaxation. 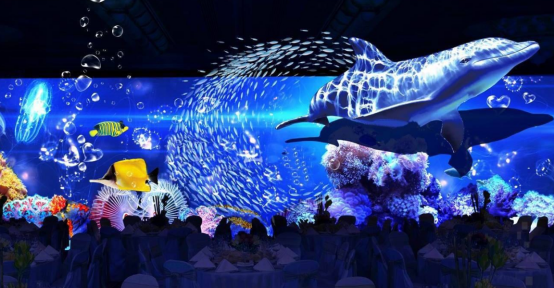 With the outbreak of coVID-19, the closure of the city on the eve of the Spring Festival disrupted the arrangement of restaurant owners, and the whole society was suddenly frozen. The government does not allow businesses, consumers do not dare to go out to eat, the cash flow of enterprises is broken, every day open their eyes, pressure and difficulties flood in from all sides, rent, wages, social security, tax and other costs more or less should be paid, the inventory of food material deteriorated day by day expired loss. According to the Evergrande research institute's "analysis and policy recommendations on the impact of the epidemic on China's economy" released on January 31, the loss of catering and retail industry in the seven days of the Spring Festival alone may reach 500 billion yuan due to the epidemic.

For some small and micro enterprises with poor risk resistance ability, it is undoubtedly a disaster. Even some of the most successful leading enterprises are moving into the takeout business, which has become a common goal for many restaurant owners this year.

Holographic AR+ catering is one of the most effective means of self-help in the current catering industry, as well as an inevitable way under the trend of Internet economy.

Advantage: Strong sense of experience, can present a variety of 3D immersive and fully wrapped scenes, beautiful and magnificent, there is the vast universe, deep seabed, spring, summer, autumn and winter, custom all kinds of scenes, one-button switch. Application: Entire restaurant or room.

Advantages: The visual effect of naked eye 3D highlights the corresponding area of the restaurant, which can be 1 and can be assembled. Application: any place in the restaurant, ceiling, wall, suspension, etc.

2. The environment is changeable and never falling behind. It is suitable for the management of chain stores and can change the store image in a second according to the seasons, holidays and other requirements.

The hotel lobby is no longer hung with several clocks and frescoes, but can be used to create a more vivid atmosphere with holographic projection on the wall. The walkway is no longer covered with thick carpet, but is replaced by interesting interactive ground projection. When people walk through the corridor, they can see flowers under their feet, fish scattering, water waves following and other magical effects, which greatly increase the interactivity and interest.

360-degree phantom is the most magical technology for holographic projection, developed by Danish company ViZoo in 2006. Using a holographic membrane, they created a geometric model of an inverted pyramid shaped triangular funnel. Video images from four projectors are then diffractive inside the funnel, where they join together to create a holographic image that looks as if something is floating in the air. The system can also be equipped with a touch screen, so that the audience can manipulate the 3D product model to rotate or decompose through various gestures and actions. In this way, the audience can have an in-depth understanding of the performance of the product on display. Therefore, as soon as this holographic display system appeared, it quickly became a new advertising carrier appearing frequently in various exhibitions and releases. In addition, the technology is also popular in museums, which can reproduce some precious cultural relics for visitors to enjoy, while the original objects are properly preserved to prevent theft.

Of course, transmembrane is not the only method of holographic imaging. Pure air imaging is also possible. The system generates air molecules with imaging properties similar to water mist, receives a projection from a projector, and presents a three-dimensional hologram. However, this method is expensive, so the image space presented is limited.

Holographic restaurant is also called light and shadow restaurant, immersive restaurant, interactive projection restaurant. The curtain wall of various shapes is projected by multiple projection devices, and the 3D video is accurately displayed on the curtain wall, the ground, the dining table and even the ceiling through fusion technology, thus forming multi-angle, multi-level and interconnected images. Enhance the three-dimensional sense of the restaurant, realistic, with background music, to achieve an immersive effect. The projected images can be customized to attract customers, improve brand recognition and increase consumption willingness.

Holographic banquet hall through 360 degrees of open hole holographic technology, interactive runway, props, theme Settings, wedding projection, lighting, sound, sound and light elements integrated into the banquet hall of science and technology to change traditional banquet hall in the form of fixed, presents the immersive visual feast, make the top party effect a change in the past stage effect can only rely on the LED the traditional patterns of the system, lighting, stage scenery in full set, not just in the new stage, but let the whole venue create a fantastic realism combined with shock the background sound, finally presents the compares the effect of atmosphere of Spring Festival gala, The sci-fi feel is that you can hear it with your ears, see it with your eyes, and even touch it with your hands.

Compared with its domestic peers, WIMI has built a comprehensive library of holographic AR content in formats ranging from 3D models to holographic short videos. As of December 31, 2018, there are 4,654 ready-to-use AR holographic content available for WIMI holographic AR products and solutions covering a wide range of categories, including animals, cartoon characters, vehicles and food. Of these, 2,961 were used for educational scenes, 851 for tourism, 739 for arts and entertainment, and 103 for science popularization. In addition, WIMI's content library is enriched with copyrighted content licensed from third parties. WIMI works with a variety of content owners, including brands, film producers and talent agents, to convert high-quality IP into AR.