RUPNAGAR, PUNJAB, INDIA / ACCESSWIRE / July 1, 2020 / Company "MediaOfficers" have come up with TikTok like Indian social app that is soon going to create a rage in the Indian markets.

Much has already been said and heard about the banning of 59 Chinese apps by the Indian government. Since the last few years, these Chinese apps had taken over several parts of the Indian markets in many ways and created a rage amongst Indians, making the Chinese markets maximize their profits through these apps. However, a strong and a commendable decision from the government of India came out recently to ban as good as 59 Chinese apps, including one of the most growing and the most popular social app TikTok.

Hence, it became imperative to create TikTok like apps made in India, which would help fill in the space of the famous social app seamlessly. One may ask, is there any Indian app like TikTok already? Well, the answer is yes, a growing and a renowned digital marketing and web development company called "Media Officers" has created a social app named "Raask", which is an app like TikTok made in India. It has been launched in the market as a TikTok alternative Indian app. 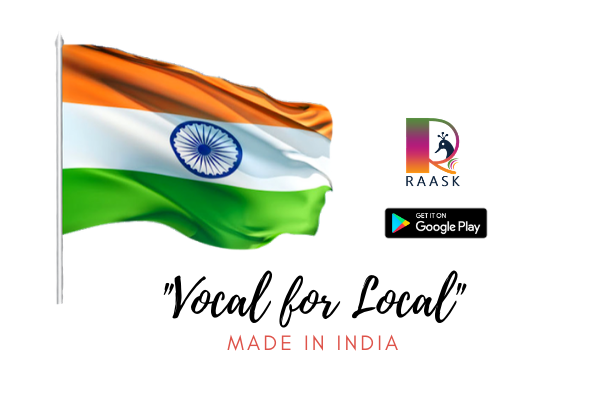 Raask is the name derived from Sanskrit which means a form of 'Entertainment.' The logo of the Indian social app is also very unique and speaks volumes about India and its culture by capturing the picture of a peacock, the Indian National Bird and using varied colours in the logo symbolising the high-spirits and vivacious energy of the Indian user's experience.

Talking about the distinctive features of Raask - a similar app like TikTok made in India; it is a social app that is made for creating and sharing short videos. It is an incredible social video application video sharing platform which is full of distinct features like umpteen numbers of filters, dubbing features and many other things. Users of Raask can easily create, edit, like, comment, share, and even message. It is made to overtake the popularity TikTok earned over the years by offering a platform to all the users for representing their skills and art. It is an Indian app and product that is aimed to give artists an exemplary platform to increase their fan following by showing their talents and expanding their reach.

Media Officers and their head honchos Rudrah Gourav and Rudrah Keshav, through this app, has shown their commitment to initiatives like "Make In India" and "Vocal for Local". They have also pledged to support India as a responsible citizen with their business activities.

Also, what's even more impressive about this Indian app is that Raask would be making donations of 10% of its revenue to artists to build their careers and lives better than ever. Both the directors of Media Officers are confident and positive that more and more Indians would come out in support of TikTok like app in India called Raask and download the app in huge numbers. The aim is only to keep people entertained, giving an enhanced and engaging user experience and providing a platform for all users once again to promote their talents.