TORONTO, ON / ACCESSWIRE / June 26, 2020 / AEX Gold Inc. ("AEX" or the "Corporation")(TSXV:AEX) is pleased to announce that it has been granted a new Mineral Exploration License in South Greenland by the Mineral Licence and Safety Authority ("MLSA"). The license covers 1,710 km2 in South Greenland and is prospective for gold mineralisation. With this new license, AEX now has a dominant exploration footprint over the entire Nanortalik Gold Belt.

"We are delighted to have secured the Mineral Exploration License for Anoritooq, a significant area of land in Southern Greenland to add to our high-grade exploration portfolio. By securing the Mineral Exploration License at Anoritooq and doubling the size of our portfolio of licenses, the Company has further solidified its position as the dominant gold play in Greenland whilst also retaining its focus on quality geology.

With our unique portfolio of high-grade assets, particularly for Nalunaq, the management and Board are confident in delivering substantial value to our investors through near-term project catalysts and an exciting exploration upside." 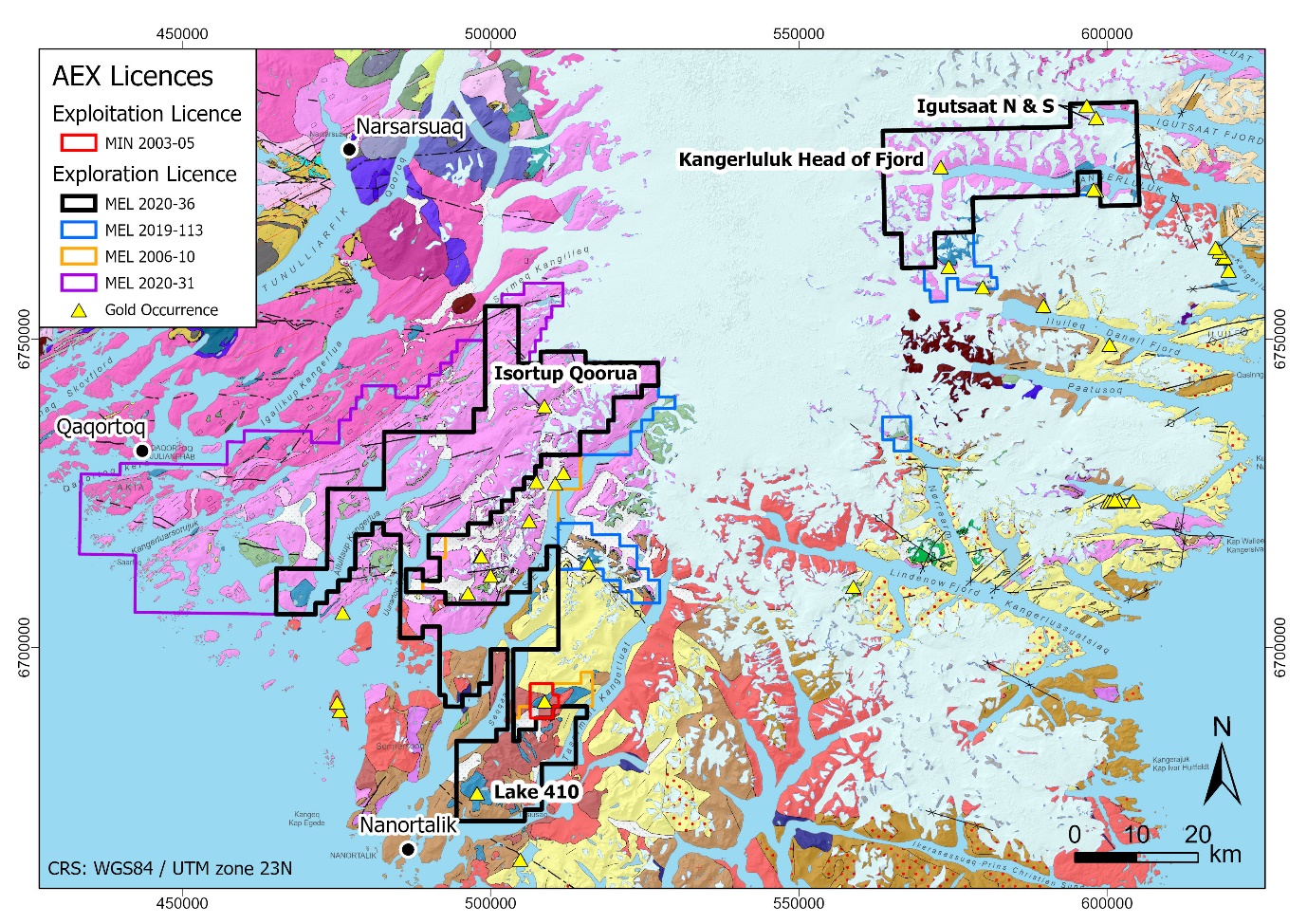 Totalling 1,710 km2, the license is divided into two sub-areas: a main part that lies between AEX's Saarloq and Vagar exploration licenses and covers parts of the Niaqornaarsuk, Akuliaruseq and Nanortalik peninsulas to the northeast and north of Nanortalik, and a second sub-area on the south east coast of Greenland that follows the inner parts of Kangerluluk and Igutsaat Fjord. Both sub-areas can be accessed by boat or helicopter. Exploration will be supported from AEX's camp at Nalunaq.

The geology of South Greenland is dominated by the Paleoproterozoic Ketilidian orogenic belt (1850 - 1725 Ma), formed during subduction of an oceanic plate under the Archean North Atlantic Craton. The orogen can be divided into three broad zones from northwest to southeast (Figure 2): 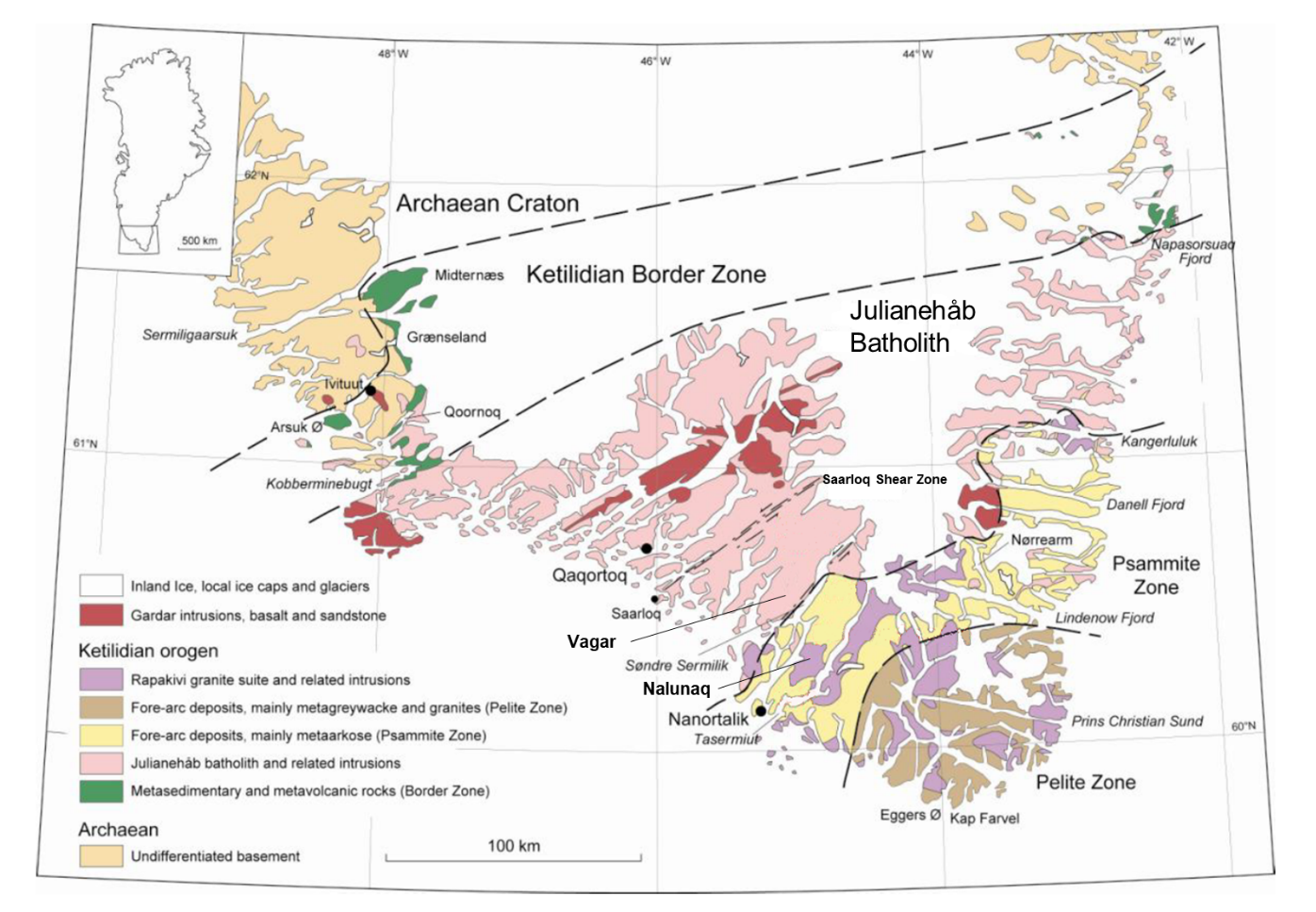 The geology of the main sub-area of license 2020/36 is quite varied, comprising Julianehåb Batholith granites and granodiorites in its northern part and Ketilidian metasediments, metavolcanics and Rapakivi granites in its southern part.

The prospect that has seen most exploration is Lake 410 on the southern end of the Nanortalik Peninsula, a short distance from the town of Nanortalik. This shows several geological similarities to Nalunaq and is part of the same nappe. Crew Gold conducted several seasons of exploration here including 2,241 m of diamond drilling. This identified a mineralised structure that showed continuity over more than 700 m along strike, with intersections of up to 2.12 ppm gold over 2 m in amphibolites. AEX plans to carry out 3D modelling and further structural assessment of this target. It is not yet known if the low grades are representative of the in-situ geology or are a consequence of high nugget-effect mineralisation, similar to that found at Nalunaq, and AEX plans to collect larger samples for gold deportment studies. Prospecting will be carried out in key areas with unexplained scree sediment gold anomalies.

In addition to Lake 410, a mineralised shear zone is recorded in the northern part of the main sub-area in the Isortup Qoorua valley, to the north of AEX's Vagar license. The shear zone is several kilometres long and historical exploration has returned chip samples up to 3.4 ppm that require further investigation.

The Kangerluluk sub-area is mostly underlain by granites with some enclaves of metavolcanic rocks. This area has seen little exploration although there are three published mineral occurrences. One at the head of Kangerluluk Fjord includes quartz veining with elevated tungsten, molybdenum and copper associated with gold, with grades of up to 1.2 % copper and 0.6 ppm gold. Lead-zinc mineralisation is also found related to later shear zones and carbonatisation. The carbonate zones contain grades of up to 2.2% lead, 4% zinc, 0.223 ppm gold and 114 ppm copper. There are also several sulphide-bearing rust zones and aplite sills that require further assessment.

On the northern side of Igutsaat Fjord, at least four distinct east-west striking rust zones are exposed in the granodiorite. Iron sulphide is disseminated in the zone and occurs in hairline fractures and veinlets with analyses showing trace amounts of gold (Stendal 1997).

A major, east-west striking, 5-8 m thick rusty aplite sill is exposed on the southern side of Igusaat Fjord. The sill strikes approximately 060° and dips 20° southeast. The aplite is enclosed in mafic sill rock, 0.5-1 m thick. Earlier mafic dykes are displaced several metres dextrally along the sill plane and the aplite appears to have been emplaced into a sub-horizontal shear zone in an earlier mafic sill. The rusty aplite contains 1-2 vol.% pyrite, both disseminated and in veinlets with grab samples returning grades of up to 1.39 ppm gold (Stendal 1997).

Enclaves of metavolcanic rock on the northern side of Kangerluluk fjord have potential to host extensions to the high-grade gold mineralisation identified on the southern side of the fjord within AEX's Nuna Nutaaq license 2019/113, where Goldcorp reported up to 110 g/t Au over 80 cm true thickness from a NE-trending shear structure in 1997. Additional enclaves to those on the published geological maps have been identified by AEX from aerial photographs.

In addition to the published gold occurrences, gold has been reported in altered gabbros and norites of the appinite suite from near Alluitsup Paa and on Angmalortoq Island, with samples collected by Platinova Resources in 1987 returning 440 ppb and 180 ppb respectively. AEX will collect samples to verify these results and assess the mineralisation style.

AEX intends to conduct remote sensing analysis, prospecting work and geophysical surveys in this license over the next two years to define drill targets. Work at Lake 410 may include mineralogical studies to determine the nature of gold mineralisation and whether the low grades are a consequence of erratic gold distributions, i.e. a high nugget effect or an artefact of a different style of mineralisation.