VANCOUVER, BC / ACCESSWIRE / June 24, 2020 / Roughrider Exploration Limited (TSXV:REL) ("Roughrider" or the " Company") is pleased to announce it has signed a Binding Letter of Intent ("LOI") with Mirva Properties Ltd ("Mirva") to option a 100% interest in its Empire Mine Property (the "Property") located on Northern Vancouver Island, B.C, approximately 28 kilometers ("km") southwest of Port McNeill, B.C. (see Figure 1).

Roughrider's CEO, Adam Travis, comments: "Based on our technical review and my personal field examination earlier this month, I am excited about the opportunity of rapidly advancing the multiple new and historic prospects on this exceptional property. I would like to commend the team at Mirva led by Denis Pelletier for consolidating the area over the last five years as well as continuing to acquire and compile the extensive historical data.

Our preliminary review of this historical data already shows significant gold and copper with interesting cobalt and silver drill intercepts, a good initial resource calculation in 2008 with the resource open to depth, as well as numerous geological, geochemical and geophysical targets along a 6 km prospective trend along with many other mineral occurrences throughout the property worthy of aggressive follow up. Soon after identifying the potential of the district we proceeded quickly with an LOI, doubled the size of the Property and will continue the detailed compilation and acquisition of historical data of this very exciting area and quickly move onto fieldwork and permitting."

Occurrences of copper were first reported to have been discovered in 1897 along the Old Sport horizon near the Benson River on the east slope of Merry Widow Mountain. Previous mining and exploration has been mainly focused on two areas at either the base of the Quatsino limestone (Old Sport Horizon) or the near the top of the Quatsino limestone near its contacts with the Merry Widow intrusion (Empire Mine) ( see Figure 2).

Near the Benson River, Cominco mined 2.6 mt of material between 1962-1972 from the Old Sport or Coast Copper Mine (a portion of this mine not on the current Property) and the Benson Lake Mine which produced 90,184,161 lbs. of copper, 377,165 oz of silver and 126,386 oz of gold. Material grades averaged 1.57% copper, 4.48 g/t silver and 1.48 g/t gold. These mines were exploiting the stratigraphically controlled Old Sport Horizon, characterized by magnetite and chalcopyrite bodies in widths varying from 0.6 to 30 metres ("m") associated with a dioritic sill near the base of the Quatsino Limestone Formation (see Figures 1 & 2). The mine closed in 1972 after the introduction of stiff mining royalties.

Later exploration including detailed airborne geophysics surveys by Grand Portage Resources in 2007 indicates that the Old Sport Trend continues for at total length of 6 km and up to 3 km south of historical workings. Grand Portage drilled 7 drillholes totaling 3,870m testing this horizon of which 5 holes reached the targeted depth. Drillhole MW07-54 was collared 900m south of the Benson Lake mine workings along a prominent magnetic high and it intersected 0.63m of 1.20 g/t gold, 31.00 g/t silver, 5.25% copper and 11.30% iron at a depth of 711m below surface. Although this previous drill intercept is not considered economic it attests to the continuity of mineralization at significant distances outside of historical underground workings. Further exploration is clearly warranted on this large-scale target copper-gold horizon which occurs over a potential 6 km strike length and up to 700m down dip before it encounters the intrusive contact, especially since it appears to be less than half mined by previous workers.

Located approximately 1 km west and 700m in elevation above the Old Sport Horizon the Empire Mine extracted 3.37 mt of magnetite material from the Merry Widow, Kingfisher, and Raven magnetite material bodies between 1957-1967. Mineralization is localized near the top of the Quatsino limestone formation near its contact with the Merry Widow Intrusion. It is important to note that the focus at the time was on producing a magnetite material concentrate and even though chalcopyrite (copper) and pyrite (iron sulphide) lenses and zones were encountered they were considered a detriment to producing a clean magnetite concentrate and were purposely avoided. One small pit (Raven) was reportedly abandoned and later backfilled with waste due to the presence of abundant pyrite and chalcopyrite contaminating the magnetite material. Later studies have shown an intimate association of gold with late phase chalcopyrite, and preliminary metallurgical studies indicate favourable recoveries for gold, copper and silver.

After 1967 no substantial work appears to have been undertaken in the area until 1989 when Taywin Resources acquired the Quatsino crown grants and completed exploration of the Merry Widow pit area including the drilling of 42 diamond drillholes (2,850m), 120 poorly documented short reverse circulation drillholes and the completion of a pre-feasibility study with the goal to process material at BHP-Utah's Island Copper Mine near Port Hardy. By 1993 Taywin changed focus with new leadership and moved its corporate office to Ontario.

In 2004 Grand Portage optioned the Crown Grants and started acquiring claims throughout the area. Between 2005 and 2008 Grand Portage completed extensive exploration programs including two airborne AeroTem II Electro-Magnetic ("EM") and magnetometer geophysical surveys totaling 3,219 line km, a 8.5 line km IP survey over the Benson Lake Mine, a ground magnetic and Max-Min horizontal loop EM survey in the vicinity of the Merry Widow pit, the collection of 790 silt samples, 466 soil samples and 31 rock samples, and the completion of 92 diamond drillholes (12,450m). Most of their drilling was completed within and north of the Merry Widow pit, largely following up Taywin's 1989 drilling.

In 2008 Grand Portage completed an update to their resource estimate and calculated a measured and indicated resource of 960,000 tonnes at 2.03 g/t gold, 5.64 g/t silver, 0.34 % copper, 0.013% cobalt and 16.1% iron using a 0.50 g/t gold cut-off. This resource was noted to be open to depth where further drilling was recommended, no additional work on the resource has been completed since the 2008 resource estimate ² ³.

Roughrider considers this historical estimate reliable as well as relevant as it represents key targets for future exploration work. A Qualified Person has reviewed the data presented in this news release and the previous 43 101 Reports and Assessment Reports however has not done sufficient work to verify the data or classify the historical estimate as a current mineral resource as such Roughrider is not treating this historical estimate as a current mineral resource. The historical resource was based on a database comprised of gold, silver, copper, iron and cobalt assays from 2,290 core samples and 274 specific gravity measurements from 43 down-hole survey-controlled core drill hole (Giroux, 2008)2. Confirmation drilling and detailed data verification work will be required to confirm the historical drill data prior to updating the resource estimate.

These significant previous exploration results and previous mining along a favourable 6 km long airborne magnetic and geological trend with at least 22 documented mineral occurrences attest to the exploration potential of the area for copper-gold skarn deposits with interesting silver, cobalt and magnetite credits.

Roughrider entered into a LOI with Mirva on June 21, 2020. It is expected that the Companies will sign a Definitive Agreement within two months of signing the LOI (subject to TSX Venture Exchange approval). Consideration for the Transaction includes Initial payments on closing of $50,000 and 200,000 common shares of the Company and a minimum work commitment in year one of $200,000. Total consideration over 5 years includes an aggregate $1,250,000 cash payments, the issuance of 3,000,000 common shares and work commitments of $2,000,000 for a 100% interest in the Property. Mirva will retain a 2% NSR on the Property of which 1% may be purchased for $1,000,000.

The scientific and technical information contained in this news release has been prepared, reviewed and approved by David Tupper, P.Geo. (British Columbia), Roughrider VP Exploration and a Qualified Person within the context of Canadian Securities Administrators' National Instrument 43-101; Standards of Disclosure for Mineral Projects.

Roughrider's current focus is the exploration of its 100% owned Eldorado, Gin and Bonanza Properties located in the Golden Triangle of northern British Columbia, adjacent to the Red Chris Mine (owned and operated by Newcrest Mining and Imperial Metals). Additionally, Roughrider will be reviewing strategic precious metal opportunities in western North America. Roughrider also holds a 100% ownership in the Sterling Property located in central BC.

On Behalf of the Board of Directors:

2 NI43-1010 Technical Report: Giroux, G. H., & Raven, W. (November 30, 2008). Technical Report on the Copper Gold Resources for the Merry Widow Property. Filed on Sedar January 22, 2009. The 2008 Grand Portage resource estimate was completed by Gary H. Giroux, P.Eng, MASc, of Giroux Consulting Ltd. in Vancouver, B.C. The estimate was based on a 3D geologic model integrating 4,448 metres of diamond drilling of 43 drill holes, 2,290 assays, with 104 down hole surveys collected between June and December 2006. The resource was reported utilizing gold cut-off grades ranging from 0.10 g/t to 3.00 g/t gold, as more particularly set out in the report. A complete copy of the report is available on Grand Portage's public filings on SEDAR (www.sedar.com). A gold cut-off grade of 0.50 g/t gold was selected as representing one possible mining scenario. For the purposes of the calculations, lognormal cumulative frequency plots were used to assess grade distribution to see if capping of high values was required and if so at what levels. For all elements capping levels were established based on the individual grade distributions as follows: Gold- a total of 18 gold assays were capped at 32.0 g/t gold, Silver- a total of 9 silver assays were capped at 165 g/t silver, Copper- a total of 7 assays were capped at 11.7% copper, Cobalt - a total of 5 assays were capped at 0.48 % cobalt, Iron- all iron assays were capped at 50% iron ( the analytical detection limit).

3 Historical information provided in this release and/or accompanied maps regarding the Company's project or adjacent properties cannot be relied upon as the Company's QP as defined under NI-43-101 has not prepared nor verified the historical information. A Qualified Person has not done sufficient work to classify the historical estimate as a current mineral resource and Roughrider is not treating this historical estimate as current mineral resources. 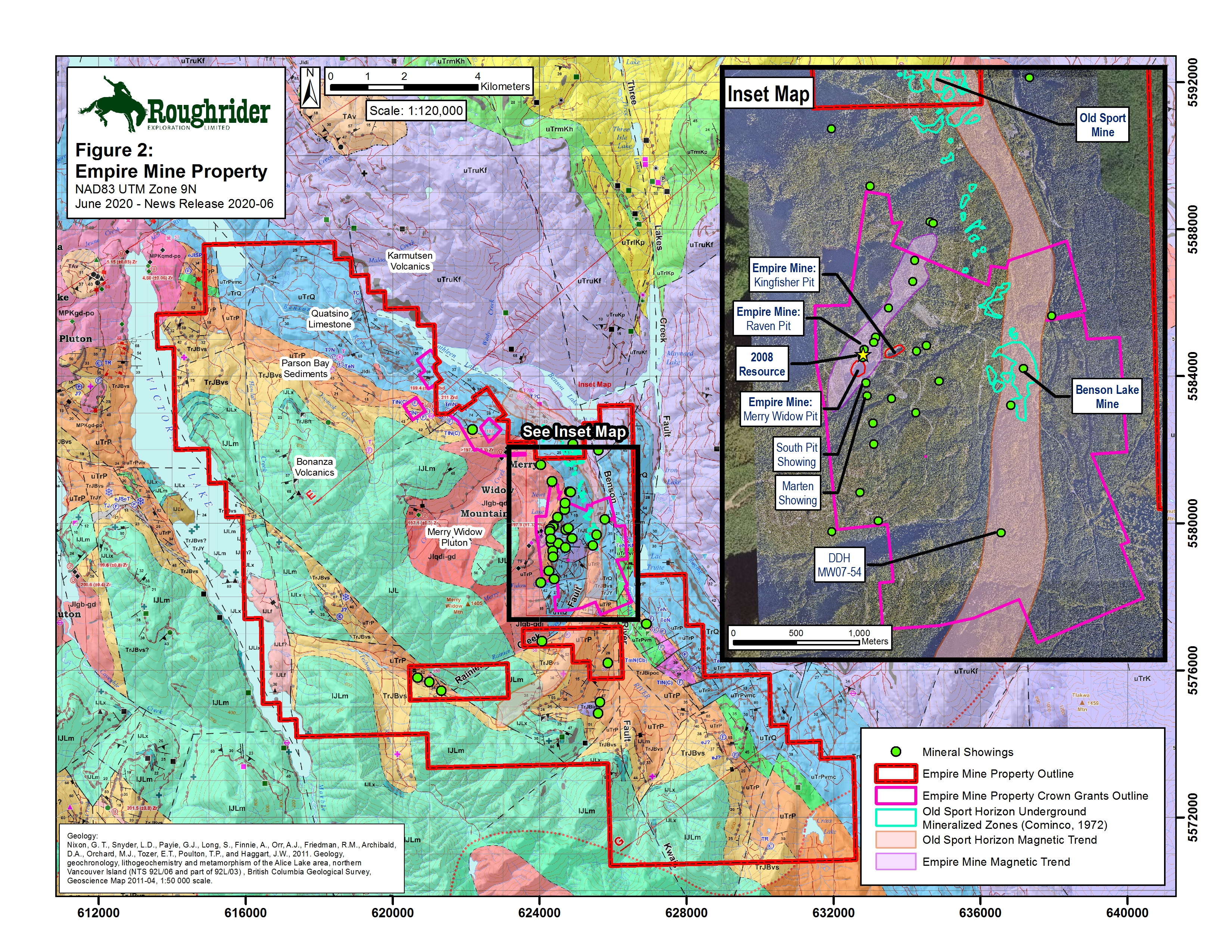 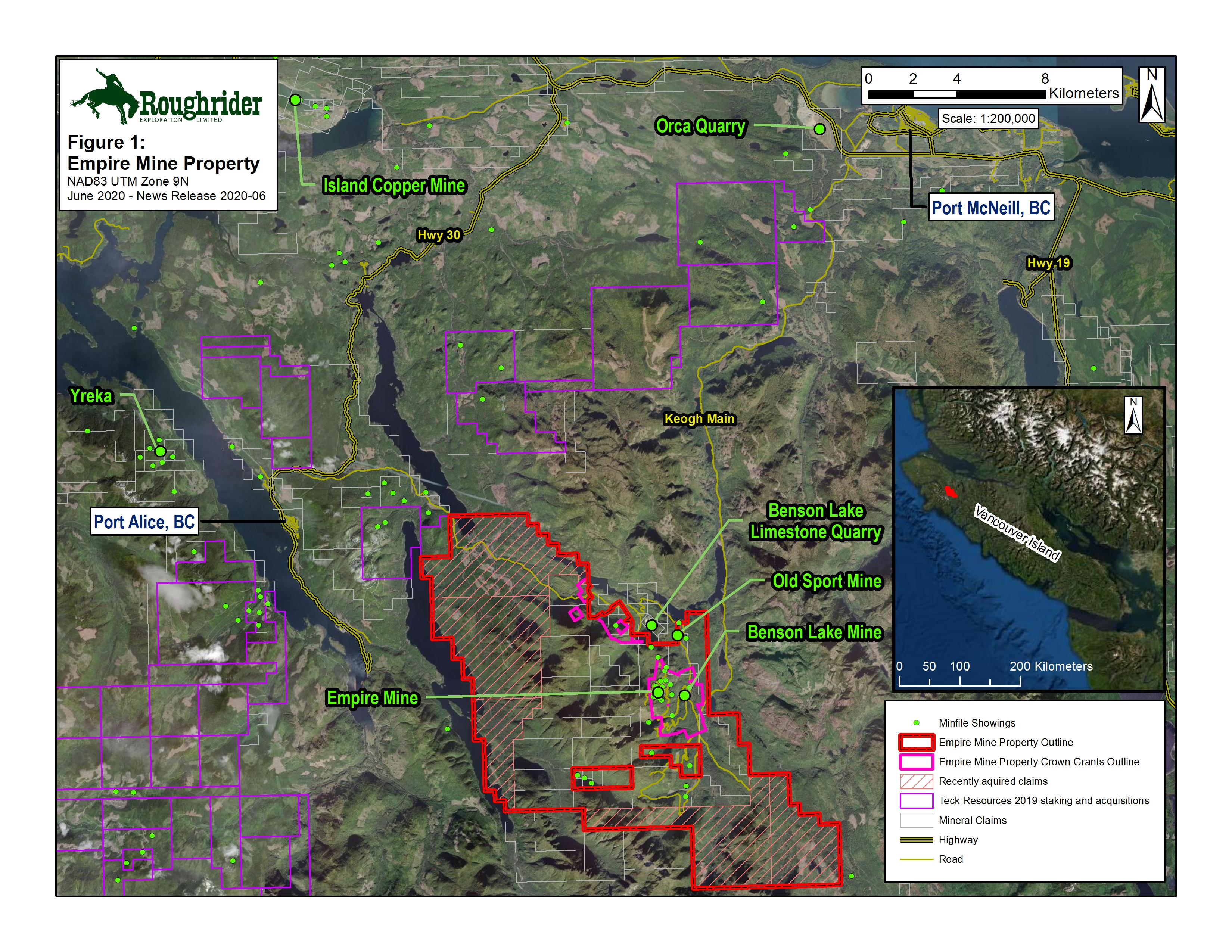