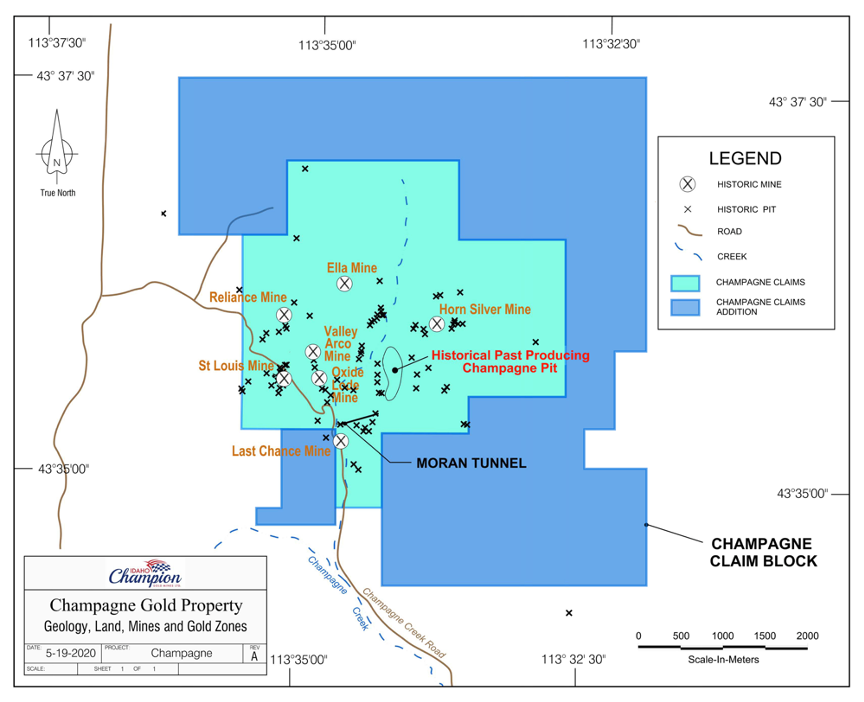 "During the desktop study on the historical data, one of the details that has stood out to our technical team was the evidence of a much bigger system at depth. We believe that this system extends beyond our original claims.," President and CEO Jonathan Buick stated. "The presence of artisanal pits and adits within the new claim blocks support there is something to be investigated with the drill bit."

A major focus of the Company's exploration thesis is on the patented property (see news release dated April 30, 2020) which hosts past-producing Bema Gold Corporation's ("Bema") open pit. The focus is supported by the recently released (see news releases dated May 11,14, 21, and 26, 2020) historical data that was purchased from Kinross Gold Corporation in March 2020.

James Baughman, Sr. Consulting Geologist stated: "The Champagne gold project is located on the southern margin of the Challis Volcanics, home to some of Idaho's most valuable gold projects. Champagne has all the markings of a tier 1 project - past gold producer, numerous historical mines on the property, and a large foot-print of alteration and mineralization on the project site stretching beyond the historic mine pit. We have 100 historic drill holes on the property that contain significant intercepts both within the historic mine pit (which presumably would have been fully or partially mined by Bema) and in the surrounding areas, as outlined in our previous news releases. These historic drill holes were completed to a shallow depth for oxide mineralization. Our summer drill program will test beneath these holes for the source of the surface mineralization at Champagne."

The summer 2020 exploration program will focus on drilling the historical mine area and mapping and sampling outside of the mine area. An IP geophysical program is planned as well for the entire claim block. The goal of this work is to potentially discover an Eocene Intrusive related gold system with significant surface dimensions.

The past-producing Champagne project has two historic, non-NI 43-101 compliant reports that calculated mineral "reserves" at the BEMA Gold mine pit before BEMA commenced mining operations therein. Although the BEMA report, Bema Champagne Mine Report, January 1989 and the subsequent Mine Associates Development Associates report titled Summary Report - Orebody Modeling and Mine Design, September, 1989 both refer to "reserves", the Company considers these "reserves" are more accurately categorized as mineral resources as it has not been determined whether these meet the current standard for a reserve classification. This is why in prior news releases the Company referred to these "reserves" as resources.

The BEMA report provides that the pit, prior to mining, had a "reserve" estimate of 2.3 million tons ("MT") at 0.902 grams per ton Au and 24.48 g/ton Ag in the proven and probable categories. Mineralized zones were classified by BEMA as proven if within 18 metres (60 feet) of a drill hole or trench. The mineralized zones were classified as probable if within 36 metres (120 feet) of a drill hole or trench. The "reserve" calculation was determined by using sectional polygons, a common method at the time the BEMA report was produced. A subsequent calculation was undertaken by Mine Development Associates. The "reserve" estimate was tabulated directly from the sectional ore blocks as a check of the BEMA results and were found to be within 0.7% of this tonnage with the same average grade . In both reports a lower cutoff of >0.3g/ton Au were used. Neither report provided a description of their QA/QC protocols.

The historical "reserve" estimate is considered to be reliable, however, the computational method and calculations used to derive the "reserve" estimate has not been reviewed by a Qualified Person. While the historic "reserve" may be fully or predominantly mined within the old BEMA pit, the Company's thesis, based on the available historic data, including historic trenching and drilling outside the pit and historic drilling that reached below the pit is that additional mineralization may remain in the pit and may extend at depth and continue beyond the mine pit. The continuation of mineralization, include grades, has not yet been confirmed by the Company and is the subject of future exploration work.

The historical data was acquired by Gold Fields Limited, then Bema, in the development of the Champagne mine. Trench data outlines a gold enriched oxide zone with shallow reverse circulation drill holes located under the trenches that outline a zone of veins and breccia pipes ,which included the mined pit but also extend beyond the pit perimeter, as described above. Field work is being planned for this field season to map and sample the Champagne mine area, including the area under and around the mined pit, in preparation for a reverse circulation drill program.

The geology of the Champagne mine area is well documented in maps and reports prepared by the State of Idaho and the United States Geological Survey. Surface host rocks are Challis Volcanics underlain by Devonian-Mississippian Milligan formation composed of quartzites, limestones, and calcareous sediments. The Milligan formation was intruded by Idaho Batholith and subsequent igneous events that located the mineralization at Champagne.

Exploration at Champagne will focus on surface delineation of alteration and mineralization and drilling will focus on a deep target (500m) in the Milligan formation. 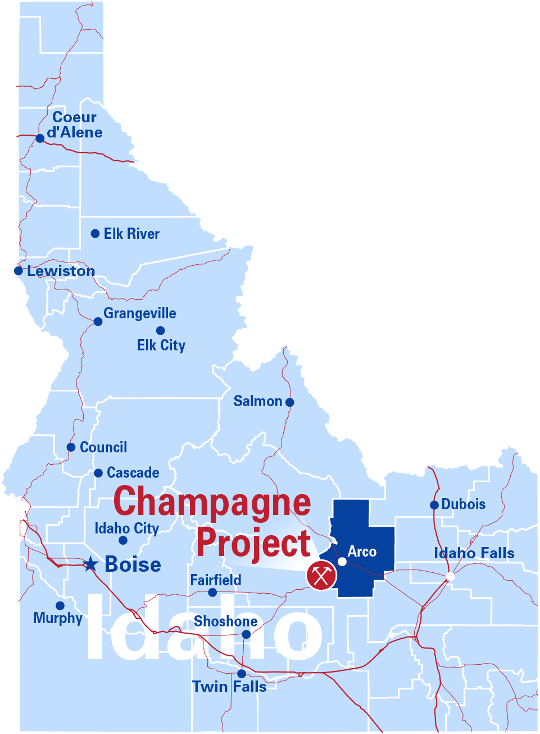 The Champagne mine was operated by Bema as a heap leach operation on a high sulfidation gold system that occurs in volcanic rocks. Bema drilled 72 shallow reverse circulation holes in addition to previous operators drilling and trenching. The property had no deep drilling or modern exploration since the mine's closure in early 1992.

The historic Champagne deposit contains epigenetic style gold and silver mineralization that occurs in strongly altered Tertiary volcanic tuffs and flows of acid to intermediate composition at Lava Creek. Argillic and sericite alteration is widespread at the historic Champagne deposit. Silica flooding, alunite and barite are closely associated with the gold and silver mineralized zone.

Champagne has a near surface cap of gold-silver mineralization emplaced by deep-seated, structurally controlled shears that acted as conduits for precious metal rich hydrothermal fluids. High grade zones in the historic Champagne deposit appear to be related to such feeder shear zones. Drilling in the future to test for polymetallic, base-precious metal deposits at depth will clarify these relationships.

Champion is a discovery-focused gold exploration company that is committed to advancing its 100% owned highly prospective mineral properties located in Idaho, United States. The Company's shares trade on the CSE under the trading symbol "ITKO". Champion is vested in Idaho with the Baner Project in Idaho County, the Champagne Project located in Butte County near Arco, and four cobalt properties in Lemhi County in the Idaho Cobalt Belt. Idaho Champion strives to be a responsible environmental steward, stakeholder and a contributing citizen to the local communities where it operates. Champion takes its social license seriously and employs local community members to service its operations.

ON BEHALF OF THE BOARD,