SHERMAN OAKS, CA / ACCESSWIRE / May 19, 2020 / With her sparkling performance of "Diamonds Are a Girl's Best Friend" on Wednesday night, April 29's episode, hosted by Nick Cannon, Kitty earned a safe vote from the audience and advanced to the Quarter Finals of The Masked Singer 2020. The Masked Singer judges, namely, Ken Jeong, Robin Thicke, Jenny McCarthy, Nicole Scherzinger and guest panelist Gordon Ramsay loved Kitty's rendition of Monroe's iconic song. We know Leo Robin would have loved it too. She stumped the panel of judges in being able to identify her, but the panelists were not at all stumped by her amazing "voice of an angel" along with her versatile talent. Gordon commented Kitty had fantastic control and amazing delivery and the way she danced - "it's so sensual." On May 6, Wednesday night's episode of The Masked Singer, the panel was left stumped once again when platinum-selling opera singer Jackie Evancho was eliminated from the competition and then unmasked to reveal to be the sultry Kitty.

Kitty performed "Diamonds Are A Girl's Best Friend," composed by Jule Styne with lyrics by Leo Robin,
during "The Battle of The Sixes: The Final 6" on The Masked Singer 2020 (Season 3).

In 1988, both Cherie Robin, and actor, Bob Hope, wanted to see to it that Leo would be acknowledged for the legacy that Roy Trakin reported on in his Variety article," Thanks for the Memory: How Leo Robin Helped Usher In the Golden Age of Song in Film;" to this end, Cherie Robin and Bob Hope sponsored Leo for a posthumous star on the Hollywood Walk of Fame. Tragically, Cherie Robin never received the good news about Leo's star because she passed away on May 28, 1989, a little over one year before the letter from the Hollywood Chamber was sent out on June 18, 1990 announcing that her husband had been awarded the star. As a result of these ill-fated circumstances, Leo's star was never installed. On July 6, 2017, Leo's grandson discovered Leo's long-lost star when he stumbled upon it on the internet. When, later that day, the grandson called the Hollywood Chamber and spoke to Ms. Martinez, he told her about his discovery of Leo's long-lost star; she officially confirmed it was true and said, "Nothing like this has ever happened before."

Almost two years later on May 23, 2019, Ashley Lee from the Los Angeles Times first broke the grandson's serendipitous discovery in her story, "Leo Robin never got his Walk of Fame star. Now his grandson is fighting for it." When, nearly 30 years ago, the acceptance letter was mailed to Mrs. Robin (deceased) and subsequently returned to sender, Ms. Lee reported what happened, "The envelope was returned to its sender and has since remained in the Chamber of Commerce's records." She also tweeted, "at first I didn't believe that Leo Robin's star had really slipped through the cracks" with a photo of that acceptance letter and the envelope stamped "RETURN TO SENDER." The Hollywood Chamber made no attempt to notify the co-sponsor, Bob Hope, who has four stars on the Walk. In a press release issued by Leo Robin Music on June 26, 2019, the following was said about the Hollywood Chamber, "What the Chamber did after the letter was (marked) "Return to Sender" was not customary practice but smacks of disregard for the individuals honored by the Walk of Fame Committee."

"Diamonds Are a Girl's Best Friend" is a jazz song introduced by Carol Channing in the original Broadway production of Gentlemen Prefer Blondes. Based on a novel by Anita Loos, Gentlemen Prefer Blonds began as a series of satiric articles Loos wrote for Harper's Bazaar about Lorelei Lee, a flapper of the 1920's who travelled to Paris to be an entertainer and was much more interested in collecting expensive pieces of jewelry from her boyfriends than she was in marriage. But it was most famously performed by Marilyn Monroe in the 1953 film version of Gentlemen Prefer Blondes. A great many entertainers have copied the iconic performance ranging from memorable performances by Madonna and Kylie Minogue to Geri Halliwell and Anna Nicole Smith to Ariana Grande and Beyoncé and even panelist Nicole Scherzinger. It has been recorded by a numerous actresses and singers including Ethel Merman in 1950, Lena Horne in 1958, Della Reese in 1960, Eartha Kitt in 1962, a country music version by Emmy Lou Harris in 1983, Thalía in 1991, The Puppini Sisters in 2011 and countless more. 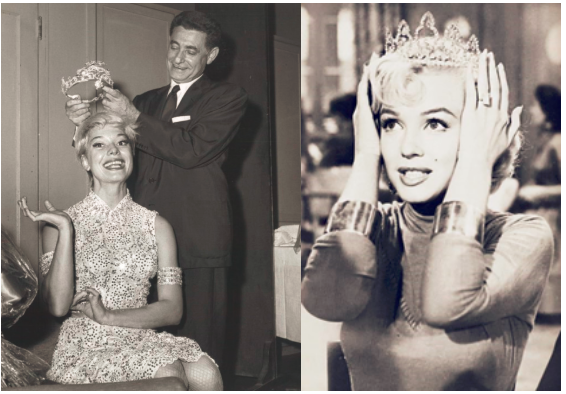 Left: Leo Robin crowns the diamond tiara on Carol Channing, who always called him Uncle Leo, during the run of the 1949 Broadway smash hit
Gentlemen Prefer Blondes, which introduced her to Broadway. Right: Marilyn Monroe wore a diamond tiara in a scene from the 1953 film Gentlemen Prefer Blondes,
where she rendered an iconic performance of "Diamonds Are a Girl's Best Friend" which went on to become her signature song.

The song has also been featured in many films such as the 2001 film Moulin Rouge!, in which it is sung principally by Nicole Kidman in the role of Satine, the fictional star performer of the famous Moulin Rouge nightclub in Paris, at the turn of the 20th century. Christina Aguilera did the song on her first featured film Burlesque in 2010. The song was recently performed by Margot Robbie as Harley Quinn while dressed as Monroe in the 2020 Birds of Prey film. The song is performed regularly on television series. It was performed by the female Glee Cast in the TV show Glee in 2013. In the 100th episode of Gossip Girl, it was portrayed by Blake Lively in a dream in which she is Marilyn Monroe and sings it. In episodes of The Muppet Show, Miss Piggy did the song with Carol Channing and then again with Whoopi Goldberg.

Meanwhile, the Hollywood Walk of Fame continues to mask the critical error it made in regard to informing the sponsors, Robin's widow and Bob Hope, that the star was awarded to the lyricist resulting in it never being installed. In contradiction to its mission, the Hollywood Chamber is not doing justice to the nomination of Robin. Instead we are witness to the injustice of Leo's long-lost star and the Chamber's refusal to honor their commitment to Robin's memory. Moreover, in a press release issued by Leo Robin Music on July 30, 2019, the following was said about the Hollywood Chamber, "What a strange twist in irony; the Chamber, which administers this famous sidewalk landmark and usually assists honorees, performed the opposite of its mission and public expectations. Instead of assisting, the Chamber obstructed installation by ignoring emails for a whole year and failing to honor its promise for the Walk of Fame Committee to consider the grandson's request for the star to be placed on the Hollywood Walk of Fame."