HALIFAX, NOVA SCOTIA / ACCESSWIRE / March 11, 2020 / Namibia Critical Metals Inc. ("Namibia Critical Metals" or the "Company") (TSXV:NMI) today announced that drilling has commenced at the Lofdal Heavy Rare Earths Project ("Lofdal") in Namibia. Contracts have also been executed with process engineering firms in South Africa to initiate metallurgical test work to evaluate mineral sorting technologies. The drilling and metallurgical test work are both part of the budgeted CD$3,000,000 Term 1 work program being carried out under the Lofdal Joint Venture with Japan Oil, Gas and Metals National Corporation ("JOGMEC"). Details of the agreement with JOGMEC were provided in the Company press release dated January 27, 2020.

Don Burton, President of Namibia Critical Metals stated "We are extremely pleased be drilling again at Lofdal. The significance of the Area 4 deposit as a potential source of heavy rare earths which include dysprosium and terbium, has been historically overlooked with so much attention on the larger light rare earth projects. JOGMEC has recognized this potential which is why the first order of business for the JV is to expand the size of the mineral resource. We expect to be updating the market with drill results on a monthly basis for the duration of the drill program."

The Lofdal Heavy Rare Earths Project is located 450 kilometers northwest of the capital city of Windhoek in the Kunene Region of north-western Namibia. The project area covers 314 square kilometers centered on the Lofdal carbonatite complex which hosts a number of rare earth occurrences, including the Area 4 deposit. Mineralization at Area 4 is dominated by xenotime, which is highly enriched in heavy rare earths. The objective of the drill program is to double the size of the current mineral resource at Area 4 and to test the potential of mineralization sampled at surface in the Northern Splay and Dolomite Hill targets (Figure 1 and Company press release February 11, 2020).

The current mineral resource has been drilled to depths of between 125 - 225 vertical meters.

Planned drilling comprises 7,700 m in 40 holes that will test for extensions of the mineralization along strike and to vertical depths of 250-300 meters along a strike length of one kilometer. Previous drilling at Area 4 in 2012 demonstrated the potential of the deposit to continue at depth with hole 4098 intersecting 10 meters @ 0.44% TREO with 82.4% heavy rare earth enrichment (including 2 meters @ 1.34% TREO with 94.1% heavy rare earth enrichment) at a vertical depth of 350 meters (Company press release November 13, 2012).

The Area 4 deposit is one of several rare earth occurrences know within the Lofdal carbonatite complex and the Company has evaluated a number of these occurrences with detailed mapping, geophysics and drilling. There are two priority heavy rare earth targets that have not been drill tested and a total of 1,500 meters of diamond drilling has been allocated in Term 1 to investigate xenotime mineralization at the Northern Splay and at Dolomite Hill.

A number of sequential processing stages have been recommended for treatment of the xenotime mineralization at Lofdal and include upfront sorting, magnetic separation, flotation and gangue acid leaching to produce a mineral concentrate. Each of these stages will be further evaluated during Term 1 through metallurgical test work programs at the appropriate facility/laboratory.

The initial focus of the metallurgical work program will be on XRT and XRF sorting using an 18 tonne representative sample that has been prepared by Light Deep Earth at their test facility in South Africa. The objective of mineral sorting technologies is to increase run of mine grades by eliminating low grade or waste particles at a coarse crush prior to fine milling required for down stream processing. Work programs have been finalized with Rados International for XRF sorting and with IMS Engineering for XRT sorting. Each facility will be provided with representative samples at a variety of screen sizes to determine the optimal outcomes using each technology. Products generated from sorting will be utilized for test work on subsequent process stages. 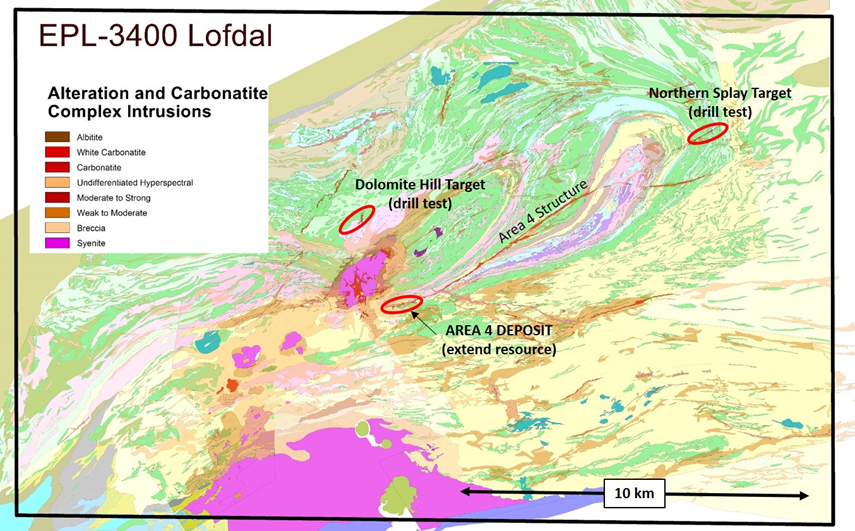 Donald M. Burton, P.Geo. and President of Namibia Critical Metals Inc., is the Company's Qualified Person and has reviewed and approved this press release.

Namibia Critical Metals Inc. holds a diversified portfolio of exploration and advanced stage projects in the country of Namibia focused on the development of sustainable and ethical sources of metals for the battery, electric vehicle and associated industries. The Company also has significant land positions in areas favourable for gold mineralization.

At the Erongo Gold Project, stratigraphic equivalents to the sediments hosting the recent Osino gold discovery at Twin Hills have been identified but not yet sampled. Detailed soil surveys are planned over this highly prospective area.

In addition to Lofdal, the Epembe Tantalum-Niobium Project is also at an advanced stage with a well-defined, 10 km long carbonatite dyke that has been delineated by detailed mapping with over 11,000 meters of drilling. Preliminary mineralogical and metallurgical studies including sorting tests (XRT), indicate the potential for significant physical upgrading. Further work will be undertaken to advance the project to a preliminary economic assessment stage.

The Kunene Cobalt-Copper Project comprises a very large area of favorable stratigraphy ("the DOF") along strike to the west of the Opuwo Co-Cu-Zn deposit. Secondary copper mineralization over a wide area points to preliminary evidence of a regional-scale hydrothermal system. Exploration targets on EPLs held in the Kunene project comprise direct extensions of the DOF style mineralization to the west, sediment-hosted cobalt and copper, orogenic copper, and stratabound Mn and Zn-Pb mineralization.

The common shares of Namibia Critical Metals Inc. trade on the TSX Venture Exchange under the symbol "NMI".