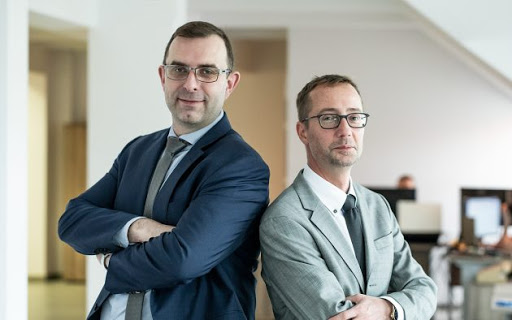 Robert Strzlecki (CEO) & Thomas Birk (Member of the Board)

The Financial Times ranking was created on the basis of a comparison of the revenue growth rates of enterprises from 32 European countries during the years 2015 - 2018. 45 Polish companies were listed in the final list of 1000 companies. TenderHut Capital Group, which SoftwareHut is a subsidiary of, was also included in the rankings with a rank of #627.

At the end of 2018, the Białystok-based software developer recorded a revenue of PLN 19.9 million (4.67 million Euro), in comparison with the year 2015, when the company's revenue amounted to PLN 0.62 million (0.15 million Euro), displays a growth rate of 3090%. The compound annual growth rate (CAGR) from the years 2015-2018 was 217%. A vast 95% of the company's turnover is generated on foreign soil as the company currently operates out of 10 global markets. - "Our vision was to consolidate the Polish IT industry and to create software mainly for foreign entities. Both of these goals were ambitious from the start, but for the last 4 years, we have effectively realized this vision, step by step, by taking over local IT companies and intensifying foreign expansion. We founded SoftwareHut in 2015 as a company offering software and IT outsourcing, supporting other companies in the group in a programming capacity, now it is the fastest-growing company in the entire TenderHut Group, and according to Financial Times, the fastest growing IT company in Poland" - Robert Strzelecki, CEO of SoftwareHut and TenderHut Capital Group, says with pride.

The company's origins reach back to June 2015, when it was headquartered in Białystok. To date, SoftwareHut has additional programmers in Warsaw, Szczecin, Wrocław, Poznań, Przemyśl, Olsztyn, the Tri-city area, as well as in the Denmark-based SoftwareHut Nordic company. - "At a certain point, we were growing at such a speed that we were getting several dozen new employees on a day-to-day basis. Implementing the growth strategy adopted by the board was a big challenge, but we were determined to see it through while simultaneously maintaining the highest technological level and caring for our employees, who are our most valuable capital" - Marcin Bartoszuk, CTO of SoftwareHut, responsible for selecting the most adequate coders for clients' projects, reminisces. Facing the challenge of dynamic growth, the company created its leading application for office management, i.e. Zonifero. The company currently has a presence on 10 global markets, and plays the role of partner and consultant in digital transformations for many clients.

What is the secret of the Polish software house's success? - "When approaching a project, we always try to look through the lens of the benefits that a client can gain from a implementation. A software should make a company's operations more efficient and bring quantifiable benefits, not just figure as a cost item on the balance sheet. By taking over successive entities on the Polish IT market, we broadened our technological competencies and the scope of services for clients. At this time, we are the place where clients can meet all of their technological needs. Integrating coders from different environments into one, effective organization was a challenge as we took over more and more companies. This process is still ongoing." - explains Jacek Zadrąg, COO of SoftwareHut, who takes care of the organization's operational effectiveness. According to Robert Strzelecki, CEO of TenderHut Capital Group, besides a comprehensive approach to customer service, the secret to success is a global perspective of the market and collaboration between companies belonging to the group.

In last year's edition of the FT1000 ranking, SoftwareHut's parent company, TenderHut Capital Group, took the highest place among Polish companies. It, in turn, recorded record-breaking revenue at the end of 2019, in the amount of PLN 37.77 million (€8.77 million Euro).