On this International Day of Happiness, The "Thanks for the Memory" Oscar-Winning Lyricist Has Brought Great Happiness to the World: Now the Hollywood Walk of Fame Should Honor its Duty to Install "#LeosLostStar" as Awarded to Him Over 29 Years Ago

On this International Day of Happiness, The "Thanks for the Memory" Oscar-Winning Lyricist Has Brought Great Happiness to the World: Now the Hollywood Walk of Fame Should Honor its Duty to Install "#LeosLostStar" as Awarded to Him Over 29 Years Ago

SHERMAN OAKS, CA / ACCESSWIRE / March 18, 2020 / On the eve of the celebration on this March 20 day, which has been established as the annual International Day of Happiness, Leo Robin Music wishes everyone true happiness and well being. "His lyrics struck such a positive note...such hopeful themes...The feelings of joy he conveyed will lift hearts for generations to come. And if you don't believe that, just hum the lyrics of "Beyond the Blue Horizon" a few times. I guarantee you'll never have to visit an analyst." Bob Hope said this in his eulogy of lyricist Leo Robin on January 2, 1985.

Leo Robin Music celebrates this Day of Happiness with the choice of "Beyond the Blue Horizon" to bring happiness to the world and and lift everyone's spirits during these trying times. This song is one of the most celebrated songs of the Great American Songbook and it has been in many great motion pictures." Jeanette MacDonald first introduced this song in the 1930 film Monte Carlo and she performed it again in the 1944 movie Follow the Boys. She would sing "Beyond the Blue Horizon" more than a few times and it became her signature song.

Lou Christie went country in 1974 on his Beyond The Blue Horizon album which featured the title track "Beyond the Blue Horizon,"
composed by Richard A. Whiting and W. Franke Harling with lyrics by Leo Robin, the big hit that went on to be used
in several film soundtracks including 1988's Rain Man starring Tom Cruise and Dustin Hoffman

More than 29 years ago, in 1988, both Cherie Robin and actor Bob Hope, wanted to see to it that Leo would be acknowledged for the legacy that Roy Trakin reported on in his Variety article, "Thanks for the Memory: How Leo Robin Helped Usher In the Golden Age of Song in Film." To this end, Cherie Robin and Bob Hope sponsored Leo for a posthumous star on the Hollywood Walk of Fame. Tragically, Cherie Robin never received the good news about Leo's star because she passed away on May 28, 1989, a little over one year before the letter from the Hollywood Chamber was sent out on June 18, 1990 announcing that her husband had been awarded the star. As a result of these ill-fated circumstances, Leo's star was never installed. On July 6, 2017, Leo's grandson discovered Leo's long-lost star when he stumbled upon it on the internet. When, later that day, the grandson called the Hollywood Chamber and spoke to Ms. Martinez, he told her about his discovery of Leo's long-lost star; she officially confirmed it was true and said, "Nothing like this has ever happened before."

Almost two years later on May 23, 2019, Ashley Lee from the Los Angeles Times first broke the grandson's serendipitous discovery in her story, "Leo Robin never got his Walk of Fame star. Now his grandson is fighting for it." When, more than 29 years ago, the acceptance letter was mailed to Mrs. Robin (deceased) and subsequently returned to sender, Ms. Lee reported what happened, "The envelope was returned to its sender and has since remained in the Chamber of Commerce's records." She also tweeted, "at first I didn't believe that Leo Robin's star had really slipped through the cracks" with a photo of that acceptance letter and the envelope stamped "RETURN TO SENDER." The Hollywood Chamber made no attempt to notify the co-sponsor, Bob Hope, who has four stars on the Walk. In a press release issued by Leo Robin Music on June 26, 2019, the following was said about the Hollywood Chamber, "What the Chamber did after the letter was (marked) "Return to Sender" was not customary practice but smacks of disregard for the individuals honored by the Walk of Fame Committee."

In America's Songs: The Stories Behind the Songs of Broadway, Hollywood, and Tin Pan Alley, Philip Furia and Michael Lasser give their interpretation, "In Monte Carlo, Jeanette MacDonald starred as a spunky but down-on-her-luck countess who leaves her feckless husband and eventually falls for a dapper count. "Beyond the Blue Horizon," the song Robin and Richard Whiting wrote for her flight from her marriage, is supposed to show her spirit and determination to rise above her financial problems, something bound to appeal to audiences during the Depression. Robin's optimistic lyric about "a rising sun" lying just "Beyond the blue horizon" certainly does the trick."

Jeanette MacDonald recorded it on August 4 at the Hollywood Recording Studio with the vocal group The Rounders and the song reached #9 in the United States. MacDonald commonly performed it in concerts and on tours and it became her signature song. This set the tune on its path to becoming a jazz standard and it has since been recorded by many of the most celebrated jazz musicians such as tenor saxophonists Coleman Hawkins and Clifford Jordan and pianist Jack Pleis and vocalists such as Nat King Cole, Al Bowlly and Johnny Mathis and pop artists such as Lou Christie and Michael Nesmith, best known as a member of the pop rock band the Monkees. The song has become part of the fabric of pop culture and has been featured in many of the greatest motion pictures including The Godfather Part III and the Lou Christie recording in the 1988 film Rain Man. The Muppets sung it on The Muppet show too. Alexander Courage stated he received inspiration from "Beyond the Blue Horizon" when writing the theme from Star Trek. 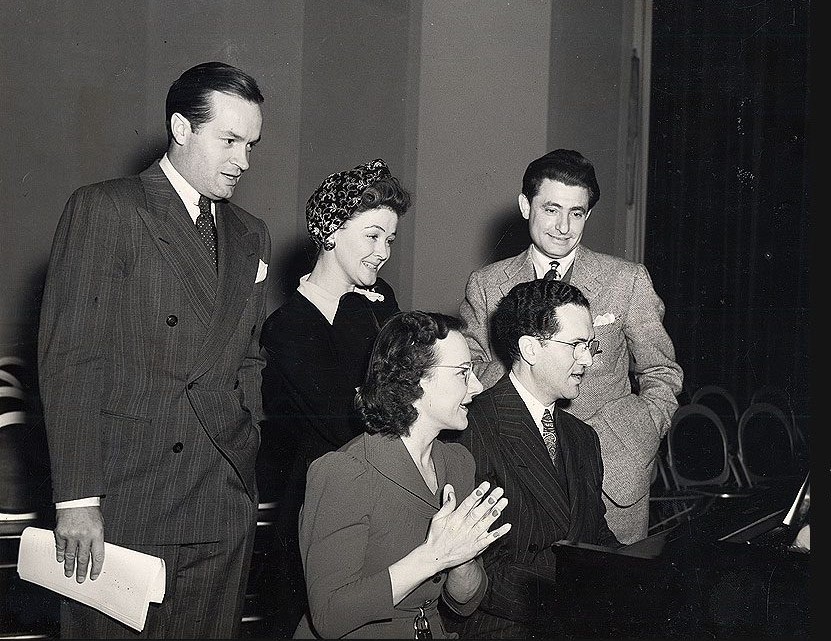 Rehearsing around the piano. Standing from left to right: legendary actor bob Hope, singer -actress Shirley Ross and
Leo Robin with Ralph Rainger playing the piano. The Famous Songwriting Team -- Leo Robin and Ralph Rainger --
received the Academy Award for Best Song in 1938 for "Thanks for the Memory" and the tune became Bob Hope's signature song.

The officials of the Hollywood Chamber should take Bob Hope's advice and hum the lyrics of "Beyond the Blue Horizon" a few times. The happiness they get from humming the song may cheer up these unhappy people and assist in resolving the dispute between Leo Robin Music and the Hollywood Chamber regarding the, as of yet, uninstalled star awarded to Robin more than 29 years ago. In contradiction to its mission, the Hollywood Chamber is not doing justice to the nomination of Robin. Instead we are witness to the injustice of Leo's long-lost star and the Hollywood Chamber's refusal to honor their commitment to his memory. Moreover, in a press release issued by Leo Robin Music on July 30, 2019, the following was said about the Hollywood Chamber, "What a strange twist in irony; the Chamber, which administers this famous sidewalk landmark and usually assists honorees, performed the opposite of its mission and public expectations. Instead of assisting, the Chamber obstructed installation by ignoring emails for a whole year and failing to honor its promise for the Walk of Fame Committee to consider the grandson's request for the star to be placed on the Hollywood Walk of Fame."

Throughout the past sixty years, the Chamber has successfully kept track of 2,690 honorees and has seen to it that each and every one of them received a star, which was then successfully installed on the Hollywood Walk of Fame -- except for Robin. On this International Day of Happiness, one can't help but conclude that Robin have been treated unjustly by the Hollywood Chamber. Johnny Grant, the honorary mayor of Hollywood for life, was proud of his mission in life of bringing the Hollywood story to everyone and in 1987, the town's centennial year, he told Times columnist Jack Smith about Hollywood, "It's a magic word all over the world." It's about time for the Hollywood Chamber to preserve the Hollywood magic and happiness and to honor the decision made by the 1990 Walk of Fame Committee to put Leo's long-lost star in its rightful place on the Hollywood Walk of Fame.