ST. ALBANS, UK / ACCESSWIRE / January 29, 2020 / The concept of blockchain and thus, Bitcoin, came riding on the advantage of the anonymity of transactions, defiance to authority, lack of centralization and overseer authority among other advantages. Cryptocurrencies became popular because their programmers touted them as anonymous. It has, however, emerged that they are not and that transactions undertaken using altcoins can be traced.

Over time with the increased government scrutiny and unwanted invasion by phishers, users now realize that the cryptocurrency world is not as anonymous as most of them were led to believe.

How Does Coin Mixing Work?

Coin mixers work by essentially collecting cryptocurrency from the people using cryptocurrency, mixing it with a giant pile of other cryptocurrencies, and then sending them smaller units of cryptocurrency to an address of their preference, with total the amount that you put in minus 1-3%. The 1-3 % is generally taken as a profit by the coin mixing company. This is how they make money.

A cryptocurrency mixer (also known as a blender) allows you to spend, store and share cryptocurrencies, without your transactional data becoming public. In short, it makes your financial transactions anonymous in the true sense. It is done by mixing your transactional data with a pool of Bitcoin data. This ensures your data is secure, you have control over your privacy, and no data can be traced back to you, as the link between the sender and the receiver is broken. 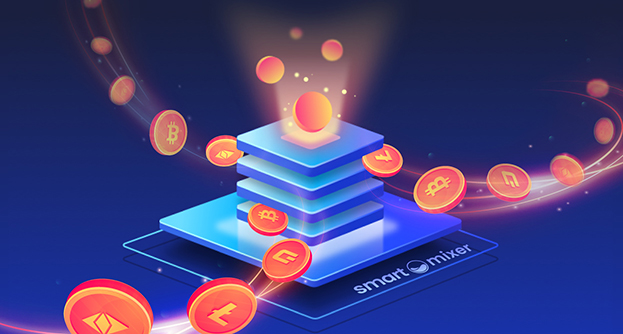 SmartMixer is a unique cryptocurrency mixer/blender that ensures your cryptocurrency becomes untraceable, and no link exists between the stakeholders. They have designed different pools of cryptocurrencies based on their sources, with variable fee percentages. This segmentation and differentiation ensure the clean mixing of the currency. The three pools include Standard Pool, Smart Pool, and Stealth Pool. It uses a 'smart code' to avoid the same currencies from reaching a user on multiple occasions.

Full Anonymity - The need for complete anonymity is greater in the online space, and it is only second to the information online prowlers seek. Users that mix cryptocurrency on the platform does not even need to input their information. Instead, only the recipient altcoin address is necessary.

Customizable Process - Users can set various parameters as they so choose. You, for instance, can choose the amount of cryptocurrency to mix, the commission to pay for the mixing, and the delay period you prefer.

The importance of privacy and security while transacting online cannot be stressed enough. It probably is the reason why platforms like SmartMixer are timely. The advantages it offers hold the possibility of making crypto mainstream.

More details about cryptocurrency mixing and the SmartMixer platform can be gathered through their official website.