TORONTO, ON / ACCESSWIRE / January 21, 2020 / AEX Gold Inc. is pleased to provide an update on the Corporation's 2019 drilling program on its 100% owned Nalunaq license in South Greenland. New Main Vein intersections in an area down-dip of historic workings in the past producing Nalunaq Mine supports the exploration target described in the project's technical report entitled "An Independent Technical Report on the Nalunaq Gold Project, South Greenland" dated March 20, 2017 (effective date of December 16, 2016), prepared for Nalunaq A/S by SRK Exploration Services Ltd. (the "Nalunaq Technical Report"). The Nalunaq Technical Report is available on SEDAR (www.sedar.com) under AEX's issuer profile.

"The objective of the 2019 drilling program was to validate the structure extension of the Main Vein across the Kirkespir Valley from South Block towards Ship Mountain. The drilling results have outperformed our expectations, including a stand-out intersection of 46.1 g/t Au over a 0.87 meter true width, and have allowed us to demonstrate the extension of the mineralized structure over an extended distance from the historical mining zones, with the structure remaining open at depth and along strike. These results are very encouraging for the future growth of the Nalunaq mine and represent further validation of the wider AEX Gold strategy in Greenland. These positive results continue to demonstrate the growth potential of the company."

Drilling in 2019 aimed to test the projected extension of the South Block mineralization (Figure 1). Results are encouraging, with a high-grade intersection in AEX1902, and a 25 centimetres quartz vein intersected 350 meters from existing workings in hole AEX1905, confirming the presence of Main Vein at sea level, outside of the inferred resources described in the Nalunaq Technical Report. It should be noted that at Nalunaq, drilling is used primarily to determine the presence of Main Vein and has not been a good predictor of gold grades historically (this is discussed further in the following section). 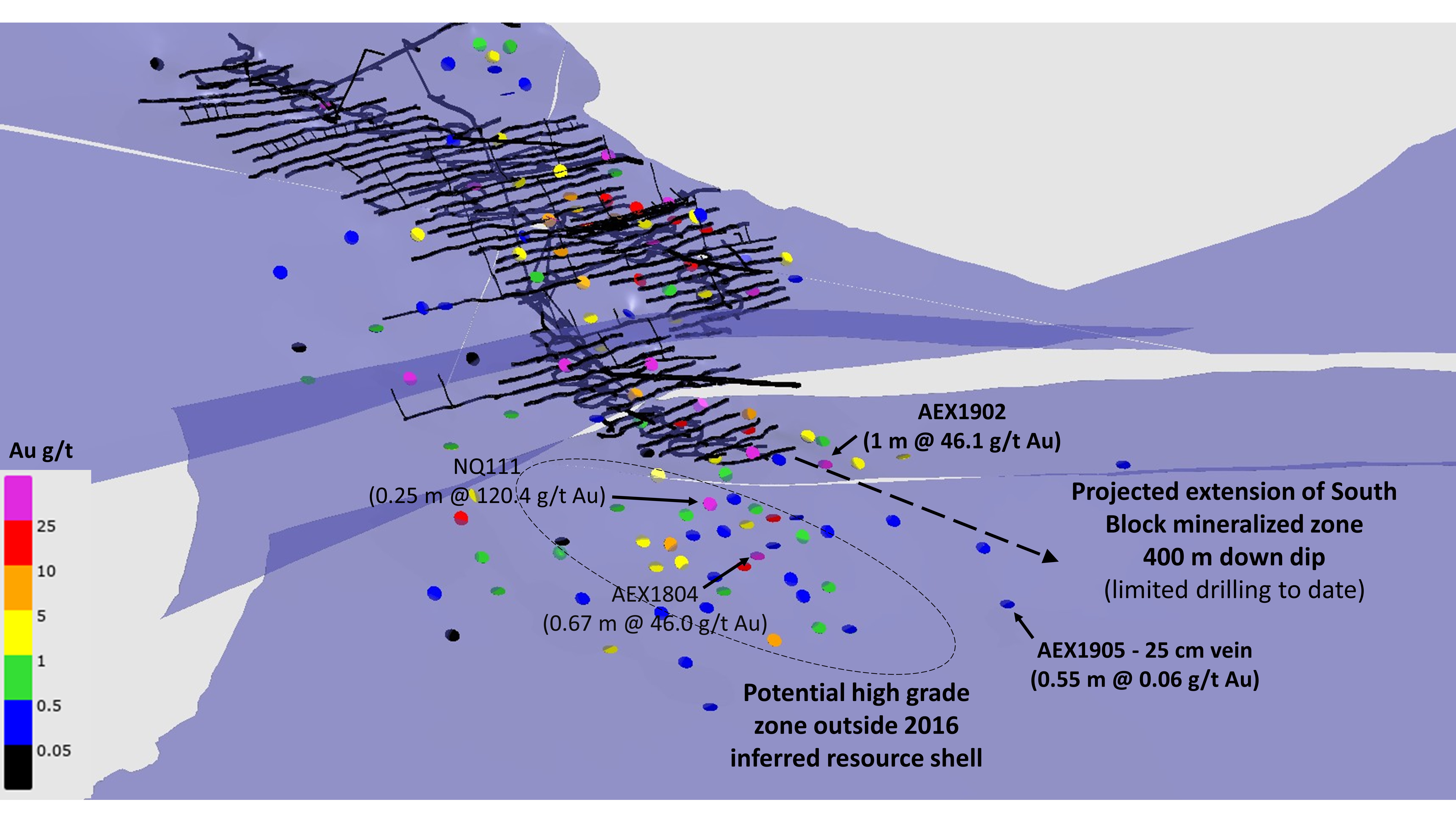 Significant intersections from the 2019 drilling program are shown in Table 1, with the location of the drill holes displayed in Figure 2. 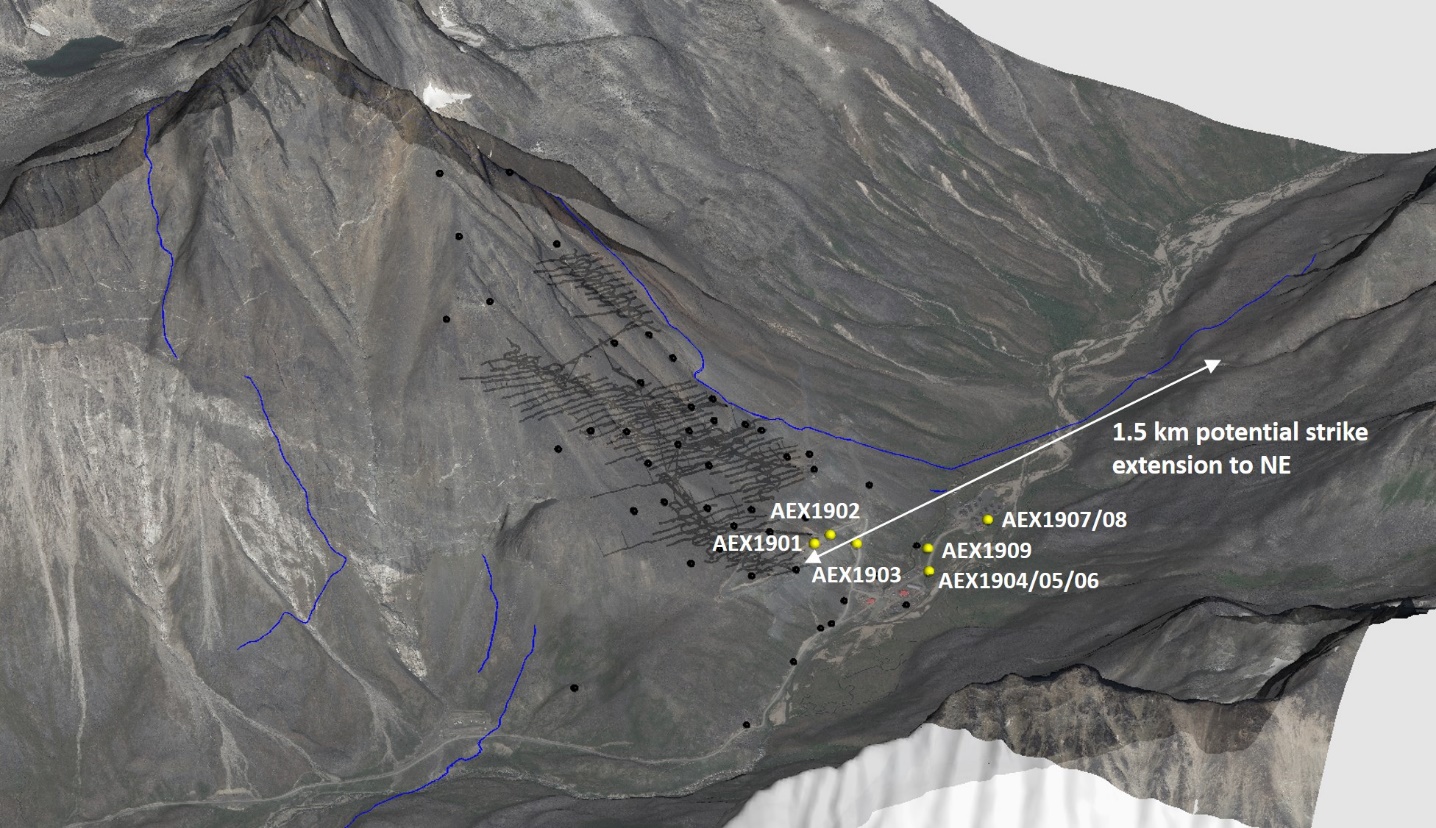 Figure 2 Location of drill pads in relation to existing workings. 2019 pads in yellow. Projected Main Vein outcrop in blue, covered by glacial overburden in the valley.

A note on drilling at Nalunaq and the nugget effect - "Drill for structure, drift for grade."

The high variability of gold grades in high-nugget deposits such as Nalunaq means accurate estimation of grade from drilling data alone is challenging. Historic operators of the Nalunaq project defined mineral resources based predominantly on underground channel sampling from development drives, and drilling was only used as a guide to confirm the presence and thickness of the Main Vein. A comparison of all past surface drilling in mined areas with block model grades (estimated from underground channel samples which reconcile with production) suggests that surface drilling typically under-calls gold grade (Figure 3). This phenomenon is not unique to Nalunaq, and AEX emphasises that whilst drilling is useful for identifying the mineralised structure, it is not a reliable indicator of grade. With this in mind, the 2019 drilling program has been successful, locating the Main Vein structure in 6 holes. Ultimately, underground exploration development will be required in order to estimate grade and mineral resources above the inferred category.

Selective sampling of historic cores may have missed the Main Vein structure where there is no well-developed quartz vein. High gold grades can also occur in such cases, which are often subtle in appearance, for example the 46.1 g/t over a 0.87 meter true width intersection in hole AEX1902. In light of this, drill core from the 2017 drilling campaign will be resampled early in the 2020 season. 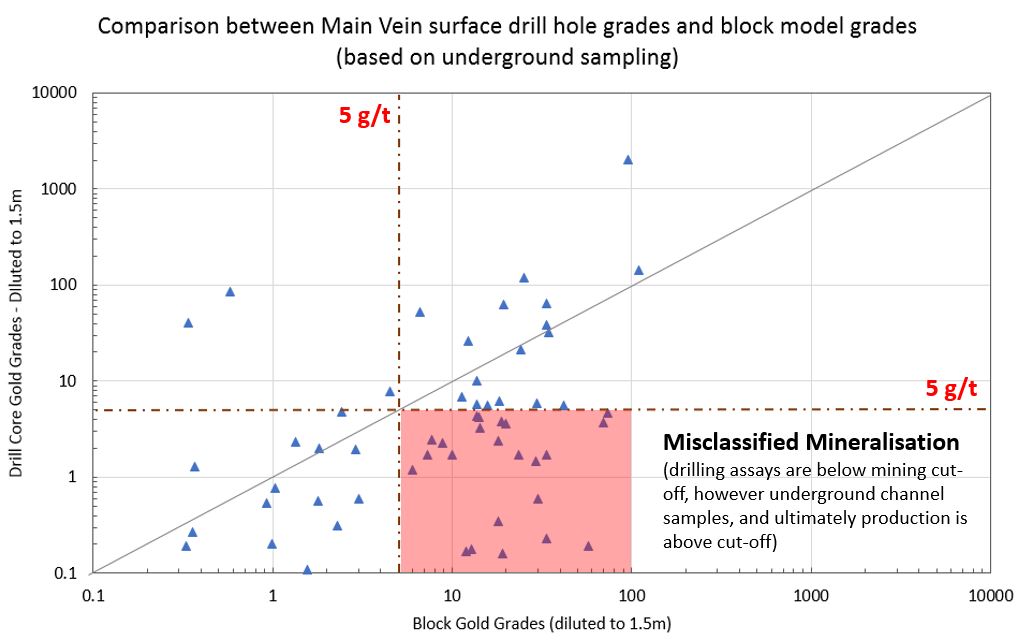 Sampling and QAQC Disclosure for the 2019 Drilling Campaign

Those parts of the drill hole which were selected for sampling were cut in half using a diamond blade core saw. Where a bottom of hole orientation line was present, the cut line was marked approximately 5 degrees off axis, and the right-hand side of the core was sampled. Drill core samples were placed into calico bags with a sample ticket, weighed, and assigned a sample ID. Each sample was sealed with a security tag, which assigns a unique security ID to the sample. Samples were transported from site to an accredited laboratory for analysis; ALS, OMAC Laboratories, Loughrea, Co Galway, Ireland.

The QA/QC program of AEX consists of the systematic insertion of certified standards of known gold content, and blanks, at a rate of 1 in 20 or 5% per QAQC type. In addition, ALS insert blanks and standards into the analytical process. The average sample mass was 1.89 kg.

AEX is in the preliminary stages of considering an additional listing on the AIM market of the London Stock Exchange plc ("AIM"), alongside its current listing on the TSX Venture Exchange, and has appointed Stifel Nicolaus Europe Limited to advise it on that process. The Corporation believes that an AIM listing may provide an optimal solution to support the growth of the Corporation's business. However, no decision has been made at this time as to whether or not the Corporation will apply for an AIM listing.

The scientific and technical information presented in this press release has been approved by James Purchase, P.Geo. (OGQ 2082), Director of Geology and Resources of G Mining Services Inc. and independent to AEX Gold Inc. for purposes of National Instrument 43-101 - Standards of Disclosure for Mineral Projects ("NI 43-101"). Mr. Purchase is a member of the L'Ordre des Géologues du Québec, and a "qualified person" for purposes of NI 43-101. Mr. Purchase has visited the Nalunaq Project and has verified the exploration results reported in this press release.

This press release includes certain "forward-looking statements". All statements other than statements of historical fact included in this press release, including without limitation statements regarding the future plans and objectives of the Corporation and the ability of drilling results to accurately predict mineralization, are forward-looking statements that involve various risks and uncertainties. These forward-looking statements include, but are not limited to, statements with respect to long-term viability of restarting production at Nalunaq; the significance of the 2019 drill results presented in this press release; potential mineralization; the structure remaining open at depth and along strike; the ability of drilling at nugget-type deposits to accurately predict mineralization; the mineralized structure extending from the historical mining zones; the 2019 drill results validating the future growth of the Nalunaq mine; the growth potential of the company; the additional listing on the London Stock Exchange's AIM market; such additional listing being an optimal solution to support the growth of AEX's business; the ability to complete any proposed exploration activities and the results of such activities; pursuing successful production and exploration programs; and other information that is based on forecasts of future operational or financial results, estimates of amounts not yet determinable and assumptions of management. Any statements that express or involve discussions with respect to predictions, expectations, beliefs, plans, projections, objectives, assumptions or future events or performance (often, but not always, using words or phrases such as "expects" or "does not expect", "is expected", "anticipates" or "does not anticipate", "plans", "estimates" or "intends" or stating that certain actions, events or results "may", "could", "would", "might" or "will" be taken, occur or be achieved) are not statements of historical fact and may be "forward-looking statements". Forward-looking statements are subject to a variety of risks and uncertainties that could cause actual events or results to differ from those reflected in the forward-looking statements. There can be no assurance that forward-looking statements will prove to be accurate and actual results and future events could differ materially from those anticipated in such statements. Important factors that could cause actual results to differ materially from the Corporation's expectations include, among others, ability of exploration activities (including drill results) to accurately predict mineralization; errors in management's geological modelling; the ability of AEX to complete further exploration activities, including drilling; risks related to the ability to raise additional capital proposed expenditure for exploration work and general and administrative expenses; international operations; the actual results of current exploration activities; conclusions of economic evaluations and changes in project parameters as plans continue to be refined as well as future prices of gold and other precious and nonprecious metals. Although the Corporation has attempted to identify important factors that could cause actual results to differ materially, there may be other factors that cause results not to be as anticipated, estimated or intended. There can be no assurance that such statements will prove to be accurate as actual results and future events could differ materially from those anticipated in such statements. Accordingly, readers should not place undue reliance on forward-looking statements. Any forward-looking information included in this press release is based only on information currently available to the Corporation and speaks only as of the date on which it is made. Except as required by applicable securities laws, the Corporation assumes no obligation to update or revise any forward-looking information to reflect new circumstances or events.

No securities regulatory authority has either approved or disapproved of the contents of this press release. Neither TSXV nor its Regulation Services Provider (as that term is defined in the policies of the TSXV) accepts responsibility for the adequacy or accuracy of this release.