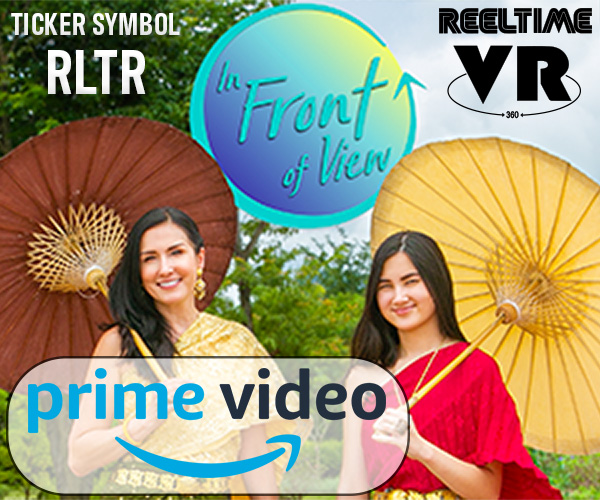 Currently there are an estimated 26 million Amazon Prime Video viewers in the US and 6.4 million in the U.K. that can now view the entire eight-episode second season exclusively, prior to being released to the general public. Anyone with an Amazon Prime account can view the travel series by searching "In Front of View" in Amazon video or at https://www.amazon.com/Mallika/dp/B083PS2CRN/ref=sr_1_1?keywords=in+front+of+view&qid=1579566153&s=instant-video&sr=1-1 Amazon Prime Videos' exclusive access to the series is the first time a series shot in full 360 VR has been available on any major traditional flat format provider marking another pioneering achievement by ReelTime VR and another landmark first for Amazon Prime Video.

Barry Henthorn exclaimed: "Expanding the availability of our content to the Prime Video viewers not only dramatically increases our audience, but it also edifies the Ubiquiview processes ability to meet strict quality standards such as Prime Videos'. The ability to create in VR and then be capable of producing the content in virtually any format expands the monetization opportunities far beyond the previously limited yet growing Virtual Reality market."

"In Front of View" the No. 1 VR travel series starring international superstar Front Montgomery and her daughter Leonie Montgomery is shot in full Virtual Reality. The first three of eight weekly released episodes can be viewed on most VR portals and but due to the capabilities of ReelTimes' proprietary Ubiquiview processes, content shot in VR is now able to be seen on traditional flat 2D formats. Currently the only place to view the entire second season or any episode in this format is on Amazon Prime Video.

The first season of In Front of View has been and is available online at YouTube, Veer, littlstar, Samsung VR, Facebook 360, Oculus, and Vimeo among others. The show has been viewed in over 40 countries on 6 continents and has won several VR awards in the travel category. In 2018-19, "In Front of Views," second season was filmed by ReelTime VR in Yellowstone National Park and all across Thailand

About Amazon Prime Video: Prime Video, also marketed as Amazon Prime Video, is an American Internet video on demand service that is developed, owned, and operated by Amazon. It offers television shows and films for rent or purchase and Prime Video, a selection of Amazon original content and licensed acquisitions included in the Amazon's Prime subscription. In the UK, US, Germany, Sweden, and Austria, access to Prime Video is also available through a video-only membership, which does not require a full Prime subscription.[ In France and Italy, Rent or Buy and Prime Video are not available on the Amazon website and Prime Video content is only accessible through a dedicated website. In some countries Prime Video additionally offers Amazon Channels, which allows viewers to subscribe to other suppliers' content, including HBO in the United States.

About ReelTime Rentals, Inc. d/b/a ReelTime VR/ReelTime Media: www.reeltime.com, is a publicly-traded company based in Seattle, WA (OTCPK:RLTR). ReelTime Media provides end to end production capabilities and discount media purchasing that is redefining how companies are evaluating and purchasing their TV, radio, print, and other new media. ReelTime is also is in the business of developing, producing and distributing Virtual Reality Content and technologies. We have an end to end production, editing, and distribution capabilities for internal and external projects. ReelTime Currently produces three ongoing series for the Samsung Gear VR platform and distributes them over numerous VR delivery portals including Gear VR, Oculus, Veer VR, HTC Vive, YouTube 360, Facebook, and others. ReelTime Media also publishes the book "It Was Always Me Edward Edwards the most Prolific Serial Killer of all time" which has been the subject of a cover story on People Magazine, Rolling Stone, In Touch, and a six-part series on Paramount network, www.itwasalwaysme.com.