Hawai‘i Swordfish Harvest Is Back after Nine-Month Hiatus

Hawai‘i Swordfish Harvest Is Back after Nine-Month Hiatus 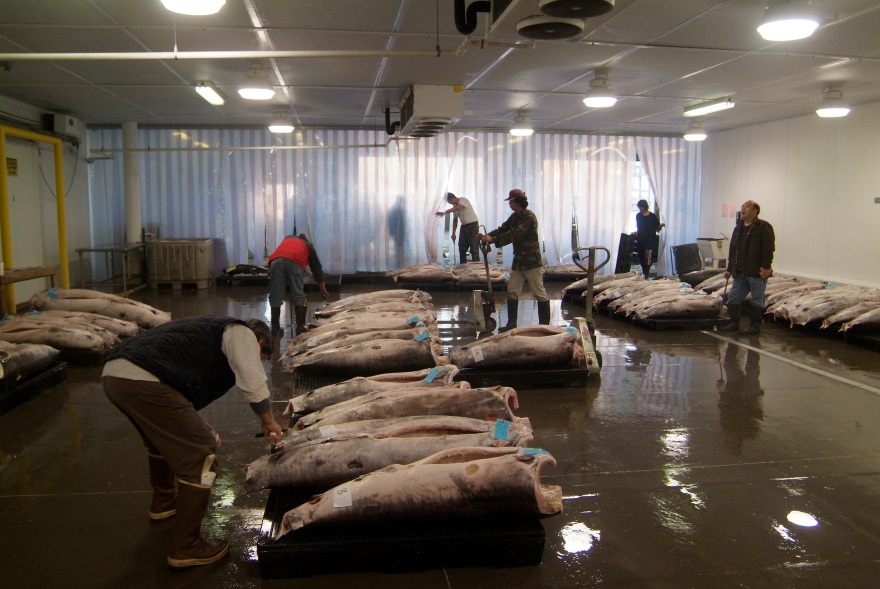 Swordfish landed by the Hawai‘i longline fleet being prepared for auction in Honolulu.

"Without Hawai‘i swordfish, US markets will increase their dependence on foreign suppliers," said Kitty M. Simonds, executive director of the Western Pacific Regional Fishery Management Council, which manages the fishery. "Our pelagic longline fisheries are well managed and rigorously monitored, and regulations are enforced. International fishery management organizations consider them model fisheries and have adopted many of the measures we developed. Our fishery targets the North Pacific stock, which is healthy (not overfished or subject to overfishing), and avoids the troubled Eastern Pacific and South Atlantic stocks."

Some of these rigorous conservation measures include rules protecting sea turtles, gear restrictions and a cap on the number of sea turtles with which the fishery may interact. The fishery currently operates under an annual cap of 17 loggerhead and 16 leatherback turtle interactions and has 100 percent observer coverage. An interaction occurs whenever a sea turtle becomes hooked or entangled in longline gear, as recorded by the NOAA National Marine Fisheries Service (NMFS) observer.

The fishery closed on March 19 last year after reaching the loggerhead cap and reopened on Jan. 1, 2020.

According to a 2019 biological opinion issued by NMFS, the Hawai‘i shallow-set longline fishery for swordfish does not jeopardize the continued existence of loggerhead and leatherback sea turtle populations. Ninety-nine percent of turtle interactions in the fishery result in the turtle being released alive. The loggerhead turtle population, which nests in Japan, is growing at an annual rate of 2.4 percent.

The Council has developed amended measures, which were transmitted to the Secretary of Commerce on Wednesday for review and approval. The amendment, which could be effective as early as May 2020, would remove the loggerhead cap and have a leatherback cap of 16. The amendment includes a trip limit of five loggerhead and two leatherback interactions, after which a vessel would be required to return to port. If that vessel reaches the trip limit again, it could not fish for swordfish for the remainder of the year and it could interact with only five loggerhead and two leatherbacks total the following year.

"For the last two years the fishery operated for about three months due to premature closure and generated around $1.5 million in landed value, said Eric Kingma, executive director of the Hawaii Longline Association (HLA). "By comparison, the fishery produced three times that revenue ($4.5 million) in 2017 and nearly $9 million in 2009. Additionally, closing the fishery forces swordfish vessels to convert to target tuna (ahi) with the risk that the bigeye tuna quota may be reached before the end-of-year, when market demand peaks."

The Lady Luck, the first vessel from the Hawai‘i swordfish fleet, is expected offload around 20,000 to 30,000 pounds of swordfish at Pier 38 in Honolulu around 4 a.m. Friday and/or Saturday, Jan. 17 and/or 18. The swordfish could appear on the auction floor around 9 a.m. For more information, contact Eric Kingma, HLA executive director, at (808) 389-2653 or [email protected] or Asuka Ishizaki, the Council's protected species coordinator, at (808) 522-8224 or [email protected]