Black Tusk has initiated data compilation for the project. Readily available information will be obtained from the Minfile records and from company assessment reports (ARIS) that were completed on the project area. The claims cover 13 Minfile occurrences and numerous project reports as shown on the database.

A brief Minfile review indicates numerous grab samples returned elevated values of gold and silver from the property (see table below). Gold values for the 13 occurrences range from 0.132 grams per tonne (gpt) to 24.0 gpt, with silver values recorded ranging from 2.2 gpt to 42.8 gpt. The mineralization is typically described as epithermal, intrusion-related polymetallic sulphide and low-sulphidation (quartz) veins. Black Tusk has not undertaken any exploration upon the claims and has yet to verify the sample results listed in the Minfile database or within ARIS reports.

A review of the ARIS database indicates that a number of rock samples returned anomalous values for gold on the property. This includes samples taken by St. Elias Mines during their 2010 work program, which included verification rock sampling in the High View, East Side, Center View and VP Minfile areas (ARIS 31796). A total of 81 rock samples were collected during their program, across shear zones, breccia bodies, and quartz veins. Ten of these samples were selected for coarse metallic assay, with three of those returning grades over 1 gpt Au. These are summarized in the below table. The samples were chip samples taken across the mineralized structure. The three higher results range from 2.21 gpt to 3.74 gpt gold.

The Huckleberry copper-molybdenum mine ceased operations in August 2016 and remains on care and maintenance. A preliminary plan to restart the mine has been developed, and will be under consideration for implementation, at such time when the economics of mining improve.

The Ootsa Project is located on the south shore of the Nechako Reservoir, 6 km from the Huckleberry copper-molybdenum mine. The project contains an estimated measured and indicated resource of 224 million tonnes grading 0.22 % copper, 0.021 % molybdenum and 0.15 gpt gold (Surge Copper Corporation website, January 2020). The reader is cautioned that resources that exist on adjacent or regional properties are not necessarily indicative of potential on the Company's South Rim Project.

Black Tusk will continue database compilation and GIS work in order to prepare an exploration plan for the South Rim project. Exploration is expected to be undertaken during the 2020 field season. 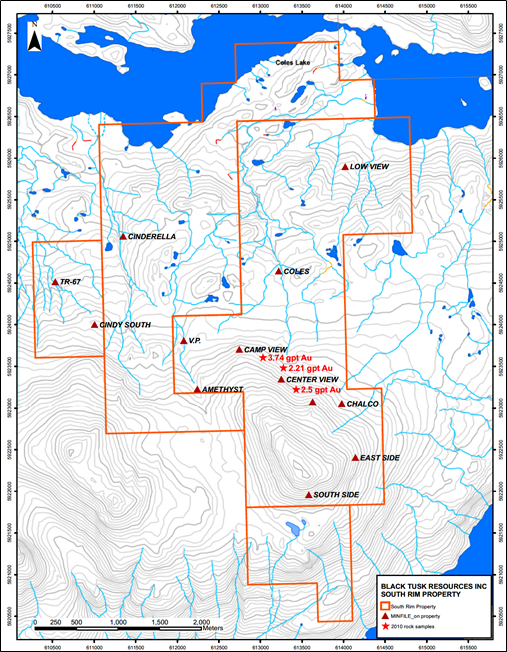