SHENZHEN, CHINA / ACCESSWIRE / January 8, 2020 / The market often sees scenarios where buyers and sellers desire to conclude transactions without disclosing prices or even divulging their identities to their counterparties.

In ancient China, there was a similar model of transaction - "hide-in-sleeve bargain", whereby buyers and sellers hid their hands in sleeves and touched each other's fingers to communicate the price in a marketplace. Nobody else could tell whether they had reached an agreement, let alone the price if they did reach one. However, this model could only work when the two parties observed the rules of the game. But human beings can hardly be trusted completely.

Now the trouble lasting for millennia was solved by LinkChain's "Columbus" Upgrade, whose completion was announced on December 31, 2019. The technical upgrade fully supports the offering of multi-asset on contracts; and enables users to deploy private assets and perform private transactions on LinkChain.

The "New World" of LinkChain

According to LinkChain's announcement, "Columbus", as compared to the present "Zheng He" version, supports multi-token in a single account and enables contracts to issue privacy tokens, in addition to fixing some small bugs. The function points between the new version and the old version are compared as follows:

This upgrade is significant for LinkChain. In history, Columbus was known for his discovery of the New World. This upgrade of LinkChain will also unveil a new world for the transactions of private digital assets. (It is interesting that LinkChain is technically supported by Beijing LinkChain Technology Co., Ltd., which is backed by a company who is named "Newland", a synonym of "New World").

The market has embraced several privacy blockchain systems, such as Monero, Dash, Zcash, ZCache, Horizon, as well as Grin and Beam that were launched in 2019. However, all these blockchain systems only allow transactions of their native tokens. Because these native tokens are not combined with the real economy, they will be of no value at all if they cannot function as universal equivalent.

However, LinkChain with the "Columbus" Upgrade enables you to create privacy tokens as needed for real-life business scenarios. For example, tokens may be created between hospitals and patients for medicines used to cure sexually transmitted diseases, enabling patients to buy the tokens and collect the medicines using private keys. Another example may be the privacy tokens created between an auction house and buyers for a certain kind of collections. Then a collector of famous paintings who hates to divulge his/her privacy may buy a painting form an online auction without disclosing his/her personal information.

…There are many scenarios of this kind and even more in international trading.

Regarding the method, LinkChain's "Columbus" Upgrade launches LRC-10 token contract standard to support multi-token in a single account. Using this standard protocol, developers can rely on LinkChain to support tokens they want to issue. Moreover, based on LRC-10, they can build tokens with smart contracts which can be interactively used by other contract applications, thereby creating ecological applications among tokens. Developers are empowered to offer token assets using smart contracts, or tokenize physical commodities or assets from under to over LinkChain while enjoying high-powered privacy service. 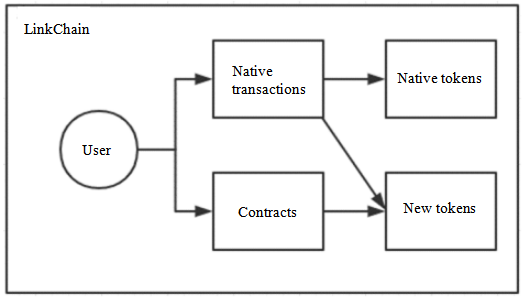 In scenarios of private transactions, change from token assets on an Account-model account to privacy UTXO format is also supported. The multi-asset account model of LinkChain endows ordinary token assets with the ability of the first kind of assets, which enables token assets to circulate freely like native digital currency and to interact more complexly with any smart contract.

Many public blockchains are not developed until whitepapers are launched, money collected, and teams established. As a result, their development continuously falls behind schedule.

By contrast, LinkChain had already taken shape when its whitepaper was published in July 2019. Technically, LinkChain has completely realized its consensus algorithm, homogeneous-chain architecture, parallelization, hardware acceleration, and other functions to improve the performance of transaction verification. LinkChain has designed a strongly consistent consensus algorithm - EBFT (Elective BFT), which enables LinkChain transactions to be confirmed within 1-3 seconds. In terms of operation, LinkChain has millions of LinkToken (LTK) users and a LTK store boasting an ecosystem of more than 400 merchants. Regarding business implementation, LinkChain has been put into application in Chaoyouhui (CYH) and other commercial projects.

LinkChain has kept and will always keep its words.

On September, 2019, LinkChain announced that it had finished "Zheng He" Upgrade, which is most significantly characterized by a combination of "Ring Signature + Zero-knowledge Proof" that protects privacy information such as address and amount of both sides of transactions, thus fully guaranteeing commercial security. The version is attached with the function of private LTK and supporting private UTXO transactions. It is the first to support anonymous transactions based on contracts in the industry, and also the first main chain to support dual account models of UTXO (that of BTC) and Account (that of ETH).

The present "Columbus" Upgrade also came as scheduled at the end of December 2019.

Given that users may realize BTC communication with LinkChain for private transactions, there will be unimaginable applications to expect.