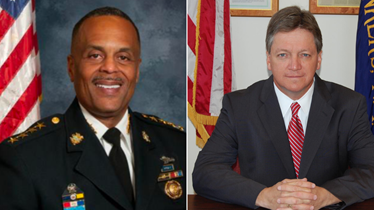 Mr. Ross Jr. and Mr. Harnett will be responsible for outreach and liaison with law enforcement police executives and community stakeholders across the country.

"After LAPD's decision to train more than 1,000 officers, the demand from larger police departments domestically and internationally has increased," said Mike Rothans, Chief Operating Officer at Wrap Technologies. "The addition of these two individuals, with decades of public safety service and executive experience with large police departments, will help carry out our mission for the BolaWrap to become a standard less-lethal option for law enforcement around the world."

As Commissioner of Philadelphia Police Department, Richard Ross Jr. led the fourth largest police department in the nation with more than 6,500 sworn and 800 civilian members.

Prior to his appointment to Commissioner, Mr. Ross Jr. served as Philadelphia Police Department's first Deputy Commissioner. In both positions, Mr. Ross Jr. helped lead the department's commitment to reform and accountability while championing community policing, community partnerships and the use of technology and data to support smart, effective and respectful policing.

Mr. Ross Jr. is the recipient of numerous awards and citations, including the Gary P. Hayes Award for Excellence in Policing and the Dawn's Place Champion Award for his work to abolish human trafficking. He has an undergraduate degree in Labor & Industrial Relations from Penn State University and a Master's Degree in Criminal Justice from Saint Joseph's University. Mr. Ross Jr. is a graduate of the Northwestern School of Police Staff and Command, the F.B.I. National Academy, the National Executive Institute, and the Police Executive Leadership Institute, and has also earned a leadership certificate from the Harvard Kennedy School.

"With almost 31 years of service in law enforcement, I've seen first-hand the challenges faced when dealing with non-compliant subjects, especially those in mental crisis," said Mr. Ross Jr. "The law enforcement community is looking for new ways to de-escalate potentially violent encounters, and the BolaWrap is an important step in the right direction."

Edmund Hartnett served 27 years in the NYPD, retiring as a Deputy Chief. He commanded several NYPD units including the Drug Enforcement Task Force, the Quality Assurance Division and the Intelligence Division.

Upon retirement from the NYPD, Mr. Harnett served as Police Commissioner of Yonkers, the fourth largest city in New York State, from 2006 through 2011. After leaving the Yonkers Police Department, Mr. Harnett worked with former NYPD Police Commissioner Bill Bratton as part of the Bratton Group on police consulting projects in Los Angeles, Oakland CA, Detroit and Baltimore.

Mr. Harnett holds a bachelor's degree from Fordham University, a master's degree in Public Administration from Marist College and a Certificate in Police Management from the Columbia University Graduate School of Business. He is a graduate of the FBI National Academy, the FBI National Executive Institute and the Executive Leaders Program of the Center for Homeland Defense and Security of the Naval Postgraduate School.

"To me, the most appealing aspect of the BolaWrap is that it does not rely on pain to gain compliance," said Mr. Harnett. "The device is a game-changer for law enforcement, and I am excited to assist in bringing the BolaWrap to law enforcement executives around the world."

Wrap Technologies is an innovator of modern policing solutions. The Company's BolaWrap 100 product is a patented, hand-held remote restraint device that discharges an eight-foot bola style Kevlar® tether to entangle an individual at a range of 10-25 feet. Developed by award-winning inventor Elwood Norris, the Company's Chief Technology Officer, the small but powerful BolaWrap 100 assists law enforcement to safely and effectively control encounters, especially those involving an individual experiencing a mental crisis. For information on the Company please visit www.wraptechnologies.com. Examples of recent media coverage are available as links under the "Media" tab of the website.

Trademark Information: BolaWrap is a trademark of Wrap Technologies, Inc. All other trade names used herein are either trademarks or registered trademarks of the respective holders.

Cautionary Note on Forward-Looking Statements - Safe Harbor Statement
This press release contains "forward-looking statements" within the meaning of the "safe harbor" provisions of the Private Securities Litigation Reform Act of 1995, including but not limited to statements regarding the Company's overall business, total addressable market and expectations regarding future sales and expenses. Words such as "expect," "anticipate," "should," "believe," "target," "project," "goals," "estimate," "potential," "predict," "may," "will," "could," "intend," variations of these terms or the negative of these terms and similar expressions are intended to identify these forward-looking statements. Forward-looking statements are subject to a number of risks and uncertainties, many of which involve factors or circumstances that are beyond the Company's control. The Company's actual results could differ materially from those stated or implied in forward-looking statements due to a number of factors, including but not limited to: the Company's ability to successful implement training programs for the use of its products; the Company's ability to manufacture and produce product for its customers; the Company's ability to develop sales for its new product solution; the acceptance of existing and future products; the availability of funding to continue to finance operations; the complexity, expense and time associated with sales to law enforcement and government entities; the lengthy evaluation and sales cycle for the Company's product solution; product defects; litigation risks from alleged product-related injuries; risks of government regulations; the ability to obtain export licenses for counties outside of the US; the ability to obtain patents and defend IP against competitors; the impact of competitive products and solutions; and the Company's ability to maintain and enhance its brand, as well as other risk factors included in the Company's most recent quarterly report on Form 10-Q and other SEC filings. These forward-looking statements are made as of the date of this press release and were based on current expectations, estimates, forecasts and projections as well as the beliefs and assumptions of management. Except as required by law, the Company undertakes no duty or obligation to update any forward-looking statements contained in this release as a result of new information, future events or changes in its expectations.