On December 15, 2019, the MXC Upgraded Their Platform App

On December 15, 2019, the MXC Upgraded Their Platform App

NEW YORK, NY / ACCESSWIRE / December 24, 2019 / On December 15, 2019, the MXC upgraded their platform App, and the contract section was tested and officially launched. BTC, ETH, and EOS, are currently available. MXC has officially joined the competition in the contract market. It can be found that MXC has very clear ambitions for its ecological blueprint. In addition, the MXC perpetual contract supports both margin positions and margin positions. Official announcement: Compared with the previous test version, the official version will greatly optimize the product experience and transaction depth.

As for the level of this contract segment that competes, the comparison between the test version and the official version should be observed first:

In the official version of the contract, only the forward contract currencies of the three mainstream currencies, BTC, ETH, and EOS, were left. The XRP, BCH, and TRX in the test version were all put into leveraged trading. In terms of UI, the hue is more blue-green, and the space above is left and placed on the left in terms to save space.

It is worth noting that in the new version of the app, MXC has also been added to the contract section, which is more valuable than the previous operation only on the web. 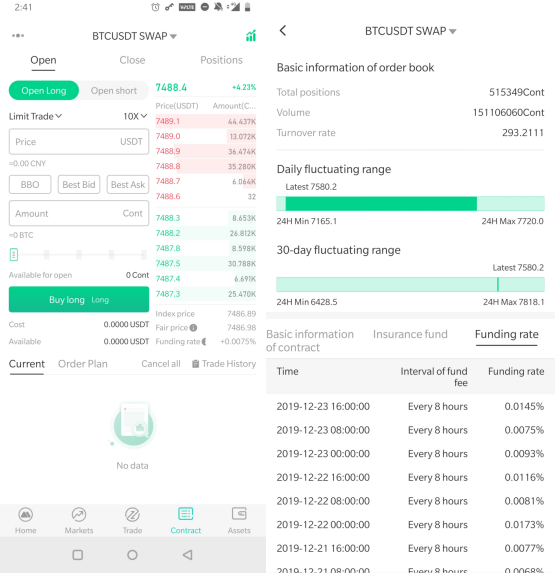 Several highlights can be mentioned:

1. The order is divided into: limit order, plan order and advanced order. Among them, the plan can guarantee that the target price is triggered and can be used to close or open a position; and the "only Maker" in the advanced commission can prevent the loss of the price by mistake

3. As well as the fund rate for settlement and settlement every 8 hours, one party can collect interest from the other party during settlement. Assume that at 3:00 on the afternoon of December 17, 2019, 10,000 short orders will be opened with 10 times leverage, the price is 6887 USDT / unit, and the total value of the position is 1 BTC. Then the rate shown in the transaction interface is 0.0535%. After calculation, the short will receive 3.685USDT, about 26 yuan. Of course, if there is a long position, this funding rate will be paid.

The question for the retail investors before was "I'm new in the market, which one do I buy?"

Now the question has changed to" I'm new in the market, spot leverage or futures contracts? how many positions? how much profit and loss?

In the crypto market right now, the atmosphere is very different from the past. Users who do not play futures leverage is unbelievable.

But in the eyes of veteran Bitcoin players, this is not much different from the situation of 14 years and 15 years. In the beginning of 2014, in the two-year bear market triggered by the bankruptcy of MT.Gox by hackers, the initial price drop left everyone at a loss. After the initial panic, the market began to fall slowly.

As prices fell, trading volume also became really dull and inactive, and liquidity entered a deadlock. On the other hand, the situation is totally different with futures contracts . The emergence of the Bitcoin futures market provides users with corresponding leverage and futures contract services.

In November 2013, the 796 platform was established. In July of the following year, the total revenue for the four weeks: 1425btc, equivalent to the current currency price of 600 USD / BTC, and a monthly income of 850,000 US dollars (data source: Bit person)

Most players have entered the futures contract market after seeing no money-making effect on the spot. While short selling and hedging have become the main theme of the market atmosphere, they have once again injected liquidity into the market.

The prevailing view is that Bitcoin is digital gold. However, there is another voice. The blockchain market cycle is four years. Within four years, the yield can only be greatly improved. In the long process of falling and boring fluctuations, futures contracts are required to provide trading opportunities for traders.

With the official launch of the MXC App contract, coupled with the slight fluctuations in bitcoin from the past week. Bitcoin has fallen again in the past two days, resulting in the contract market being relatively unpopular, only slightly better than the spot market. Gradually, some investors have revealed their contract yield on mxc on Weibo,wechat moments and other social media. 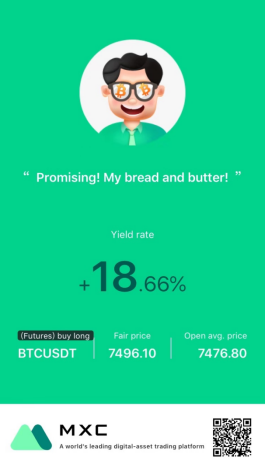 It can be observed that during the decline of BTC in the past 5 days, the mainstream tokens have also fallen. This drop has given some investors some good returns

On the whole, the market has not entered the cold winter, there is still a money-making effect, the direction is right, and the return rate is still amazing.

Admission Of Old Money, Intensified Competition In The Contract Market

Today, regardless of whether it is a top-tier exchange or the new exchanges, futures contracts have become a must-open sector. But a mature futures trading market is not a slot machine that guesses the size. It requires many prerequisites. At the same time, it also has insurance, depth, and smooth UI ... Only then has a mature futures trading market.

According to New York Digital Investment Group (NYDIG) this week has obtained the US SEC's approval to create a new Bitcoin futures fund. Bitcoin strategy fund will invest in cash-settled Bitcoin futures contracts on the CFTC registered exchange. Currently, only Bakkt and CME are qualified

The entry of traditional finance has intensified the channels for traditional funds to indirectly invest in Bitcoin, which is beneficial to the development of the blockchain industry for a long time. But at the same time, it may bring great squeeze to exchanges such as MXC. The trading platforms in the circle may need to be forced to make continuous changes in order to gain incremental users in the upcoming battle.