The Property consists of 2 contiguous mineral leases located 110 Km northeast of the town of Yellowknife in the Northwest Territories (NWT) of Canada. Historically, this territory of Canada produced some significant gold mines in Canadian history including the following:

About the Gordon Lake Gold Property

The exploration target on the Gordon Lake property is shear zone hosted gold mineralization. The minimum dimensions of the mineralized zones explored to date are 140m long, from 1m to 11m in width and a minimum depth of 215m.

To date, approximately $2 million have been spent on the property and 17 zones of anomalous mineralization have been identified so far, with only three of those zones having been drilled.

Figure 1 below shows a schematic longitudinal section showing the relationship between the Main, South and Union zones on the Gordon Lake property. This section represents about 800m of strike length between the Union Zone and the Main Zone. Drilling intersected visible gold throughout, and the mineralization is open along strike and at depth.

Other areas of mineralized quartz veining and quartz stock work have been located however, exploration consisted of limited mapping and several wide spaced channel or grab samples, including a chip sample grading 13 g/t gold over 1.5 meters, and a grab sample returning 55.4 g/t gold.

Also included in Figure 1 are historical resource estimates. This figure demonstrates the highly anomalous value of those zones already drilled and the down dip potential for adding significant value near term.

Figures 2 and Table 1 below show a cross section of the South Zone (#9Vein) which shows anomalous values from drill intercepts to a depth of 215M. 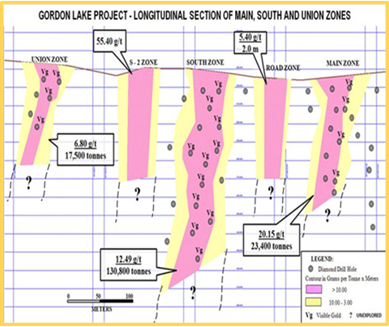 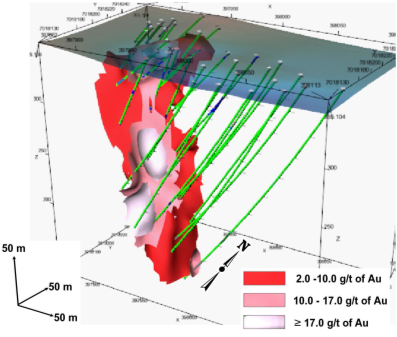 Table 1 Highlighted drill intercepts into the South Zone (#9Vein) include**:

There are 54 gold showings in the Yellowknife Supergroup surrounding Gordon Lake with five past minor producers in the near vicinity of Gordon Lake including the Tracy No.1, Goodrock, DAF Vein, Camlaren Mine, and Burnt Island.

The historic Discovery Mine is located approximately 45km WSW of the Gordon Lake and represents the closest analog of significant mineralization and or production to the Gordon Lake property. One of the ore zones at the Discovery mine was 60 meters long, averaged 1.3 meters in thickness and mined to a depth of 1,525 meters (see table 1). The Discovery deposit is a classic lode gold quartz vein hosted in Burwash metasedimentary rocks like those at Gordon Lake. The Discovery Mine was developed to a depth of >1,200 m before ceasing operations following the loss of the mill complex to fire. Production from 1949 to 1969 totaled one million oz of gold produced from one million tons of ore*. The Table 2 comparison highlights how important exploring the No. 9 Vein at depth can quickly add value to the overall project.

Regionally, there are some similarities between Gordon Lake and the large gold deposits in the Yellowknife district including the Con and Giant mines, which combined to produce over 13 million ounces of gold at a grade of 16 g/t Au. Though these mines are hosted by volcanics within the Yellowknife district, the ore zones are found in mineralized and silicified shears (quartz veins) in discreet mineralized ore shoots measuring 1-18m in thickness, up to 180m along strike and to a maximum depth of 600m (http://nvp-pgf.org/en/canada/character/description). At Gordon Lake the minimum dimensions of the mineralized zones explored to date are 140m long, from 1m to 11m in width and a minimum depth of 215m. Mineralization is also shear zone hosted (albeit hosted in Burwash metasediments).

The Gordon Lake property remains open at depth and along strike.

"Gordon Lake presents us a great opportunity to add shareholder value as we work towards furthering this project, which to date, has only been explored on 3 of the 17 zones identified," said Rana Vig, President & CEO of Blue Lagoon Resources. "It's also interesting that the nearby Discovery Mine was drilled down to over 1500 meters whereas Gordon Lake has had limited drilling down to only 205 meters in only one of the three drilled zones. The potential to expand the known mineralized areas through drilling for deeper intersections and testing continuity of the known mineralized zones at depth. This is what made this project an attractive acquisition target for the Company exciting. And that's what junior exploration is all about" he said.

William Cronk, P.Geo., a qualified person and a consultant to the Company, reviewed and approved the scientific and technical disclosure contained in this news release.