RALEIGH, NC / ACCESSWIRE / December 19, 2019 / As the leading organization for public relations, communications, and marketing professionals, the North Carolina chapter of the Public Relations Society of America is proud to honor those who have worked to elevate their profession. The highest honor the chapter bestows is the Michael L. Herman Excellence in Mentoring Award. 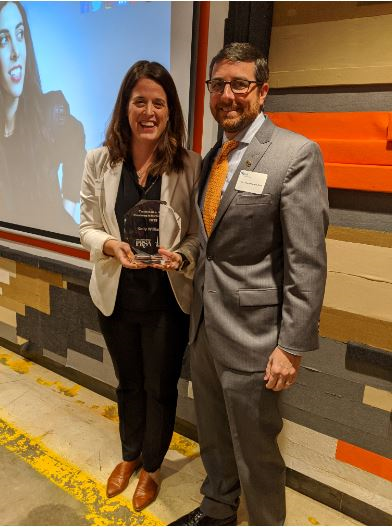 This year's winner of the Michael L. Herman Award is Kelly Williamson, president of the North American region of APCO Worldwide. Williamson started as an intern in 1999, and over her two decades at APCO founded the Raleigh office and built it into a success. As she rose through the ranks, Williamson prioritized helping others achieve. She is an adjunct professor and board member of the Hussman School of Media and Journalism at The University of North Carolina at Chapel Hill, serves as a mentor, and helped launch the Triangle Women in STEM initiative that supports women with a desire to pursue a career in STEM.

"Great mentorship looks different for everyone. I was lucky to have a mentor who advocated for me; helped me see my potential; and also taught me to be patient when I wasn't ready for the next step," Williamson said. "I'm honored to be able to serve as a mentor to others, whether they're returning to work after having their first baby, as they start their career in communications, or as they reach for new heights of leadership. I'm thankful to NCPRSA for recognizing me with this award and helping myself and others in the chapter continue to live Michael Herman's legacy."

"The Michael L. Herman Award sets a very high bar," said Chris Cowperthwaite, APR, president of NCPRSA. "Recipients achieve a significant level of personal success, but also exhibit a passion for improving the broader PR profession, while helping put others on a path to advance and achieve. Kelly's contributions to the profession are inspiring and we're thrilled to recognize her with the 2019 award."

Prior to his passing in 2015, Michael L. Herman, APR, was inducted into the PRSA College of Fellows and earned the Gold Anvil Award, PRSA's highest individual award lifetime career achievement. Herman served as a mentor for countless PR professionals in North Carolina through his work, as a leader in NCPRSA, and as a faculty member at N.C. State University's School of Communication.

The following companies are champions of PR, communications, marketing and our NCPRSA chapter.

The Public Relations Society of America is the nation's largest association of public relations professionals and among the world's largest associations of communicators. Its tag line is "Advancing the Profession and the Professional." Since 1967, the North Carolina Chapter has helped set the standard for excellence in all aspects of the profession. NCPRSA provides leadership, counsel, understanding, networking and educational growth opportunities for those within the profession and to those who may need public relations services.