Highlights of the drill results reported in this release include the following significant intercepts of zinc equivalent ("ZnEq") mineralization.

Previously unreported drill holes PEBGD000034 through 39 expanded three different high priority targets. The San Jorge zone, and two newly emerging zones: the 1021 and the manto-hosted mineralization east of San Jorge. All five of the drill holes that successfully reached their target, intersected significant mineralization which should contribute to expanding the Florida Canyon resource base. The sixth hole was lost due to drilling problems. 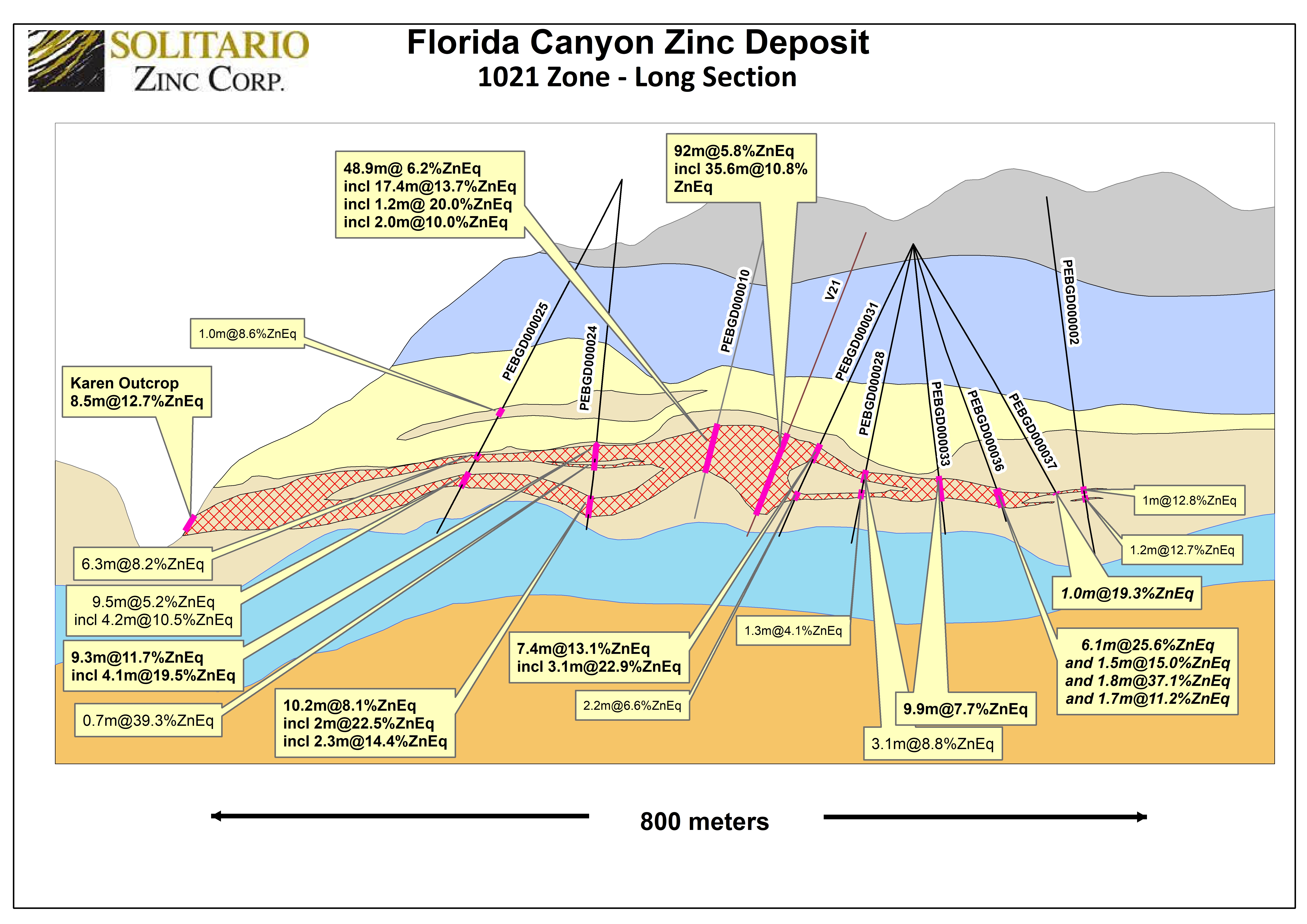 *Zn-Eq was calculated using the following price assumptions: Zn=$1.10/lb., Pb=$0.91lb., Ag=$16.50/oz.
Reported intervals are estimated to be at least 80% of the true thickness
Numbers in this table may not add exactly as numbers have been rounded to the nearest decimal

"The final results of the 2019 Florida Canyon drilling program were exceptional and topped off a very successful 2019 drilling program. Nexa and Solitario achieved our three most important objectives: 1) expanding the near-vertical San Jorge body to the south and its associated high-grade horizontal mantos to the east; 2) discovering and partially defining the 1021 Zone over a minimum strike length of 800 meters; and, 3) extending a number of horizontal mantos in the Karen-Milagros area. Great potential still exists to significantly expand the Florida Canyon mineralized system, particularly to the south where several strong surface prospects were discovered in 2018 demonstrating a corridor four kilometers long that is totally untested by drilling."

Drill hole information contained within this release is reported under Nexa's quality control program reviewed by Mr. Walt Hunt, COO for Solitario Zinc Corp., who is a qualified person as defined by National Instrument 43-101. Samples are derived from 50% splits of HQ and NQ (2.5 and 1.9 inch) diameter core. Samples are shipped via secured third-party land transportation companies and analyzed by ALS Global Inc., in Lima, Peru.

Solitario owns a 39% interest and Nexa owns a 61% indirect interest in the Florida Canyon project. Nexa can earn a 70% interest in the Florida Canyon project by continuing to fund all project expenditures and committing to place the project into production based upon a positive feasibility study. After earning 70%, and at the request of Solitario, Nexa has further agreed to finance Solitario's 30% participating interest for construction through a project loan. Solitario will repay the loan facility through 50% of its net cash flow distributions from production.

This press release contains forward-looking statements within the meaning of the U.S. Securities Act of 1933 and the U.S. Securities Exchange Act of 1934, and as defined in the United States Private Securities Litigation Reform Act of 1995 (and the equivalent under Canadian securities laws), that are intended to be covered by the safe harbor created by such sections. Forward-looking statements are statements that are not historical fact. They are based on the beliefs, estimates and opinions of the Company's management on the date the statements are made and address activities, events or developments that Solitario expects or anticipates will or may occur in the future, and are based on current expectations and assumptions. Forward-looking statements involve a number of risks and uncertainties. Consequently, there can be no assurances that such statements will prove to be accurate and actual results and future events could differ materially from those anticipated in such statements. Such forward-looking statements include, without limitation, statements regarding the Company's expectation of the projected timing and outcome of engineering studies; expectations regarding the receipt of all necessary permits and approvals to implement a mining plan, if any, at Lik or Florida Canyon; the potential for confirming, upgrading and expanding zinc, lead and silver mineralized material; future operating and capital cost estimates may indicate that the stated resources may not be economic; estimates of zinc, lead and silver grades of resources provided are predicted and actual mining grade could be substantially lower; estimates of recovery rates for could be lower than estimated for establishing the cutoff grade; and other statements that are not historical facts could vary significantly from assumptions made in the PEA. Although Solitario management believes that its expectations are based on reasonable assumptions, it can give no assurance that these expectations will prove correct. Important factors that could cause actual results to differ materially from those in the forward-looking statements include, among others, risks relating to risks that Solitario's and its joint venture partners' exploration and property advancement efforts will not be successful; risks relating to fluctuations in the price of zinc, lead and silver; the inherently hazardous nature of mining-related activities; uncertainties concerning reserve and resource estimates; availability of outside contractors, and other activities; uncertainties relating to obtaining approvals and permits from governmental regulatory authorities; the possibility that environmental laws and regulations will change over time and become even more restrictive; and availability and timing of capital for financing the Company's exploration and development activities, including uncertainty of being able to raise capital on favorable terms or at all; as well as those factors discussed in Solitario's filings with the U.S. Securities and Exchange Commission (the "SEC") including Solitario's latest Annual Report on Form 10-K and its other SEC filings (and Canadian filings) including, without limitation, its latest Quarterly Report on Form 10-Q. The Company does not intend to publicly update any forward-looking statements, whether as a result of new information, future events, or otherwise, except as may be required under applicable securities laws.